Excavating an awkward past 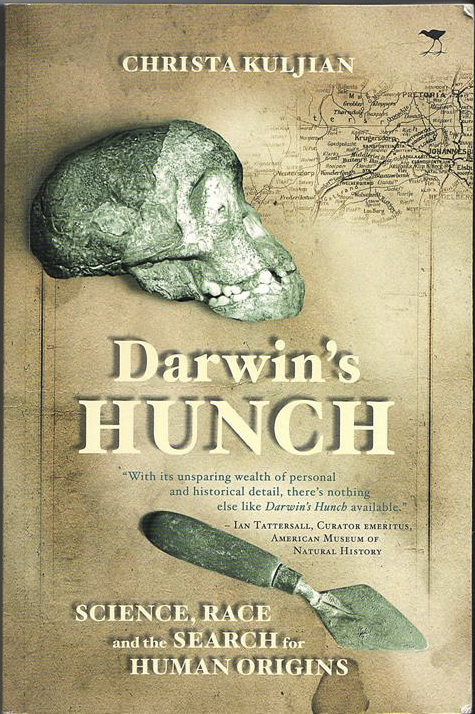 Darwin’s Hunch: Science, Race and the Search for Human Origins
By Christa Kuljian

This book is essential reading for anyone who thinks it is important to understand the political and scientific context of palaeoanthropology in South Africa. It is an extensive and thoroughly researched work that methodically contextualises groundbreaking (literally) discoveries within the political setting of their time.

It is a book about the mavericks, egos and unsung heroes of palaeoanthropology in South Africa. It’s also about how callous colonial and apartheid mindsets allowed otherwise courageous scientists to ride roughshod over the dignity of indigenous South Africans.

Christa Kuljian documents the audacious and often idiosyncratic research exploits of Raymond Dart who identified the Taung Child as a hominin ancestor and so confirmed Darwin’s Hunch that humanity’s genesis was in Africa.

Dart’s claim of African origins flew in the face of the accumulated wisdom of the European scientific establishment who believed that Europe, or at a push Asia, were far more likely to have served as a cradle for the human race. His main support came from Robert Broom, an equally odd eccentric who later discovered the bones of Mrs Ples, an Australopithecus africanus that he modestly described as  “the most important fossil skull ever found in world history”.

Kuljian documents, however, how Dart’s academic renown was built on a collection of skeletons that he avariciously accumulated with scant regard for the families of the deceased. In the case of /Keri-/Keri, he didn’t even wait for her to die before he made arrangements to transport her body to his university. In his haste to make a cast of her body he did not bother consulting with her family.

Broom is recognised today as an extraordinary scientist and an inspiring teacher who sometimes gave four lectures a day. When he gave a series of open lectures about evolution, religion and politics there was standing room only, yet Kuljian also shows him to be a grave robber who wouldn’t hesitate to dig up a body if he thought it might have interesting bones.

The writer clearly went to a lot of trouble to unearth the stories of anonymous assistants who had helped the  prominent scientists with their discoveries. Racism within the scientific community meant that research assistants and excavators occasionally had complete names, but more often just first names or were merely nameless ‘quarry boys’. Kuljian gives identity and humanity to some of these less renowned contributors to our knowledge of palaeontology. She tells the back story of  Daniel Mosehle an assistant who was so talented at finding and identifying fossils that Broom thought he was worth his weight in gold.

She also makes a point that while most palaeontology books recognise Dr Ron Clarke as the person who discovered Little Foot, he made a point of giving credit to his assistants, Stephen Motsumi and Nkwane Molefe for their significant role in finding the almost complete skeleton.

Politics is never far from centre stage in Darwin’s Hunch as those in power use palaeontological discoveries to support their agendas. South African Prime Minister, Jan Smuts, had nothing but praise for the exploits of both Dart and Broom as he believed their discoveries supported his notions of separate races.  He encouraged the two of them to forge ahead in their search for the ‘missing link’.

Many years later, when Dr Lee Berger announced with unprecedented fanfare the discovery of Homo naledi in the Dinaledi Cave System he counted on the presence of Deputy President, Cyril Ramaphosa to supply some sort of political validation of the new find.

Politics is not, however, restricted to governments. There still is the grand political question of which continent can legitimately claim to be the cradle of mankind. The review copies of this book were still fresh off the printing presses when a recently published, widely cited academic paper reclaimed the cradle for Europe with the discovery of a 7.2 million-year-old jawbone in Greece and a few teeth of similar age in Bulgaria.

Kuljian’s book accepts the widely held premise that Darwin’s hunch was correct and that the first humans walked in Africa. However, not all palaeontologists agree on where in Africa that happened. Once again, it became the subject of politics – were the first humans from East Africa or from South Africa? The answer to this question largely depends on where a particular scientist happened to be working.

Arguably, the worst kind of politics occurred at a more micro, personal level where bitter interpersonal rivalries hampered the study of our hominin ancestors. Kuljian makes a credible effort at describing these feuds and how they ultimately determined what we know today.

Darwin’s hunch is rich with facts, anecdotes, explanations and good solid research. It is hard to absorb it all, but it will be a pleasure to read it again and keep as a reference work to read several times over.