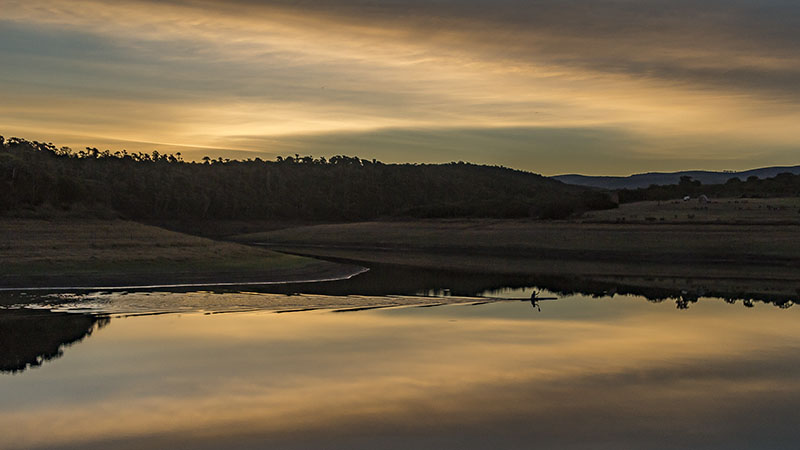 Grahamstown needs to plan for no rain, says Makana’s Director of Insfrastructure Dali Mlenzana, as the Department of Water and Sanitation reports a 1% week-on-week decrease in South Africa’s dam levels.

Mlenzana said a final report from Blackwater Divers, the team that investigated infrastructure and actual levels at Grahamstown’s Settlers and Howieson’s Poort dams on 12 and 13 July would likely be available by the end of this week. The dams are the main supply for the western side of Grahamstown.

“Finally we have reliable information about our water supply,” Mlenzana said. While the data had been handed over, it was in the form of a draft report and wasn’t yet available to the media or the public.

Whatever the data shows, however, Mlenzana says the municipality will be preparing for no water from those sources.

“We need to prepare as if it’s not going to rain,” Mlenzana said. “In the next few months we will be preparing the infrastructure to supply west Grahamstown from the Fish River tunnel system [via James Kleynhans Dam], in the east.

Mlenzana said the Sarah Baartman District Municipality had appointed consultants to look at short-, mid- and long-term interventions to secure water in its seven local municipalities.

The immediate interventions needed in Grahamstown to secure the town’s supply were the installation of a booster pump to take water from the intermediate to the high-level reservoirs, and boost the number of water storage tanks.

“So this is a question not of somehow increasing the quantity of the water to the town, but rather its actual availablity,” Mlenzana said. During water outages, the town’s high-lying areas including the Industrial Area, Hill 60, Cradock Heights, the PJ Olivier area and the suburbs around Sugarloaf Hill are the first to lose supply because the water is supplied by a gravity feed.

Also in the planning was the purchase rainwater harvesting tanks, for both the rural and urban parts of Makana, Mlenzana said.

“However, all of these require money.”

According to the Department of Water and Sanitation, the latest dam level recordings reflect a drop from 70.4% last week to 69.9% this week.

The Algoa System in the Eastern Cape, which has five dams, had decreased slightly from 33.3% to 32.7% compared to 72.2% last year, the Department said in a media release. The system includes Nelson Mandela Bay, which is currently experiencing serious water challenges that have forced the metro to impose severe restrictions in and around Port Elizabeth.

Despite the recent rains in the Western Cape, the report released by the department this week painted a bleak picture of two dams, Gamka and Gamkapoort, which are virtually empty.

They are followed by Floriskraal and Stompdrift, whose levels are 4.1% and 4.7% respectively.

However, the report showed a different picture in the Vaal Dam which supplies Gauteng and two other provinces, whose level stands at a reasonable 93.9% compared to 36% at the height of the drought last year.

In the Free State, the Bloemfontein System, with four dams serving mainly Mangaung, decreased by 1.2% to 45% from 46.2% compared to 31.3% during the same time last year.

The Crocodile West System in North West, with six dams serving mainly Tshwane, Madibeng and Rustenburg, has also experienced a slight decrease from 98.6% to 98.2%. The system recorded 95.2% last year.
Despite some heavy rains in parts of KwaZulu-Natal, Umgeni system, with five dams serving mainly eThekwini and Msunduzi, decreased from 61% to 60.3% this week. The system was at 47.9% during the same time last year. – Additional information from SAnews.gov.za

When will it rain?
According to the South African Weather Service’s Seasonal Climate Watch report for July to November 2017, while the forecast for late winter rain (July, August, September) is uncertain, early spring rainfall is predicted to be above normal. This covers the period September, October, November.

“It is still not possible to give a clear indication regarding the expected rainfall conditions for the winter-rainfall region of South Africa, even with early spring prospects of favourable rainfall conditions in the region,” the report states. “Due to the negative impact of drier conditions that could possibly occur, it is recommended that current drought measures in place continue for the foreseeable future.”

Temperatures are expected to be higher, particularly in late winter, except in the south-west.