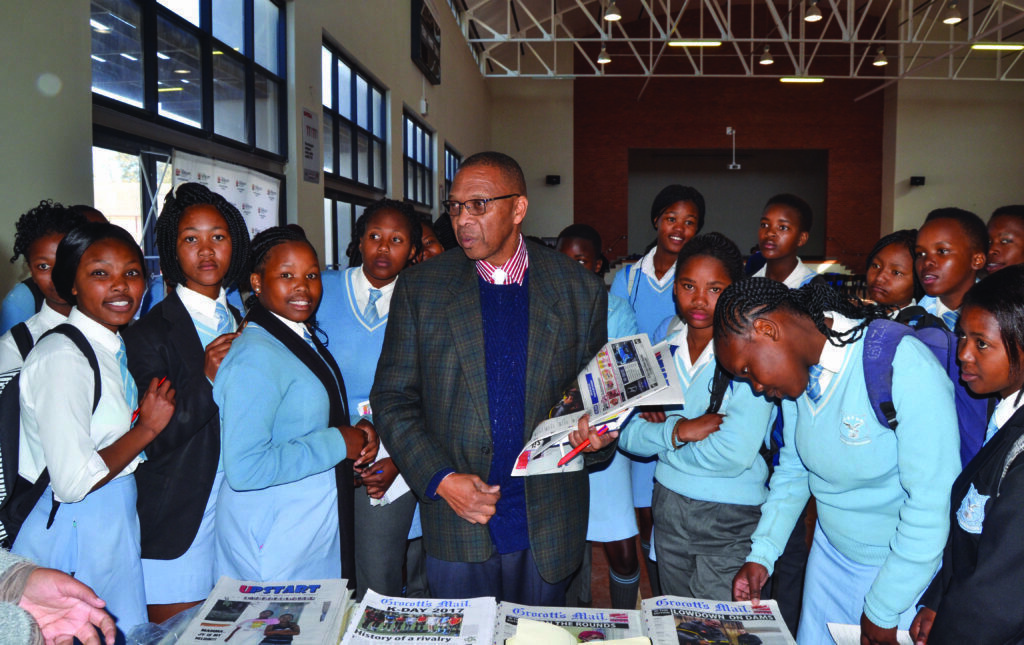 A host of businesses and various higher education institutions heeded the call from Grahamstown’s Department of Education, to collaborate and have an information session for the benefit of six goverment schools in attendance, as part of their joint Careers Exhibition Day at the new Indoor Sports Centre in Extension 6.

Reverend Bangushe opened with a prayer and encouragement, saying, “You need to ask God for the energy, courage, strength, and wisdom you will need to carry you through your studies.”

The information session came at the perfect time for at least 500 learners in attendance from grades 9 to 12. The 9th graders were going to make their grade 10 subject choices right after the event, and needed to  broaden their horizons and envision the various career paths they could take with their school subjects.

South Africa has the sad statistic of unemployed graduates at around 35%, the experts advised. Partly due to various socio-economic issues, but also because learners change courses frequently because of a lack of knowledge about suitable career paths. Short staffing also leads to average or poor results.

One of the key organisers, teacher Mrs Mgedezi, reminded the guests of the session’s theme: “You are the architect of your future”, as she spoke to the learners about introspection. She wanted them to look at three aspects of their lives, now more than ever. These were themed as Praying to God; Remaining Focused, as well as the most important buzzword: Freeze!

“Freeze everything that you feel is distracting you from your achievments; no is no and yes is yes,” Mgedezi said.

She also said, “Our District Director at the Department of Education, Mr De Bruyn said he wants all of you to aim for level 7 and 6 passes. If you are getting that, come to me and I’ll personally make sure to hand over a bursary to you!”

Representative of the Department of Minerals and Resources, Thabo Makupula, the brother of Eastern Cape Department of Education MEC Mandla Makupula, came from Pretoria on behalf of Minister Mosebenzi Zwane to tell learners about the huge gap in this sector, and its relevance.

Mining makes a whole 20% of our GDP, and South Africa has no less than 64 minerals to tap into, Makupula told the learners.

Makupula also wanted to challenge the notion that mining is a ‘man’s world’.

“There are way more girls than boys in South Africa, and girls should please choose mining,” he said. He shared his personal experience as a scholar: he had been an early recipient of the Nelson Mandela Scholarship and encouraged learners to make the most of their learning experience and research the many paths they could take.