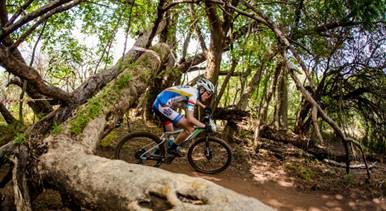 Over the past three decades, mountain biking (MTB) has radically transformed from a marginal adventure activity into a bona fide mainstream sport popular with a wide range of South Africans.  In the late 80’s and early 90’s when demand for off road bikes and gear emerged, MTB was commonly pegged as ‘just a fad’.  However, it didn’t take long before scores of road cyclists started trying it out with many crossing over to the more spirited, technical riding experience. Many others were drawn to the sport of cycling for the first time by the sheer allure of being able to rather ride bikes off-road through sensational natural landscapes.

Given South Africa’s bountiful and diverse outdoor environments, as well as the excellent weather, it is probably not surprising that MTB has exploded in the country.  While for young and old, singles and families, it may just be a great healthy past time, MTB has also developed as a significant sport in the country. Getting SA kids out and on their mountain bikes

The phenomenal popularity of MTB; its power to deliver SA champions and master trail builders, and its role as booster of economic recreation, especially in our mountainous rural areas, all point to the worthiness of strategic investment in the sport.  In line with this, arguably, the greatest investment one can make is in increasing SA youth’s access to MTB.  As pioneer of SA’s MTB schools league, the Spurs Schools MTB initiative is today the country’s largest high school cycling programme and main nursery for talent in the sport.  There are currently 493 participating schools delivering more than 10 500 entries into 46 regional events across 9 provinces.  Every year since its inception, the Spurs Schools Mountain Bike League achieves a 10% growth.

However, the goal is far more than just the nurturing of exceptional talent.  The league recognises the contribution that a love of mountain biking can make towards children enjoying a healthy, active lifestyle with a connection to nature and the outdoors.  As Meurant Botha points out: “The vision of the Spur Schools MTB League is to get young riders onto their bikes to ride for the pure enjoyment of being outside and exercising, on their own, or with friends and family.  From there, they can take their mountain biking as far as their personal goals and passions drive them through the League platform. We’ll know we’ve succeeded if we just ignite a passion for mountain biking – a sport that can be enjoyed by the whole family, and over a lifetime.” For more information about Spur Schools MTB League, how to enter and upcoming events visit http://www.spurmtbleague.co.za/ or www.trailtag.co.za for League school results.