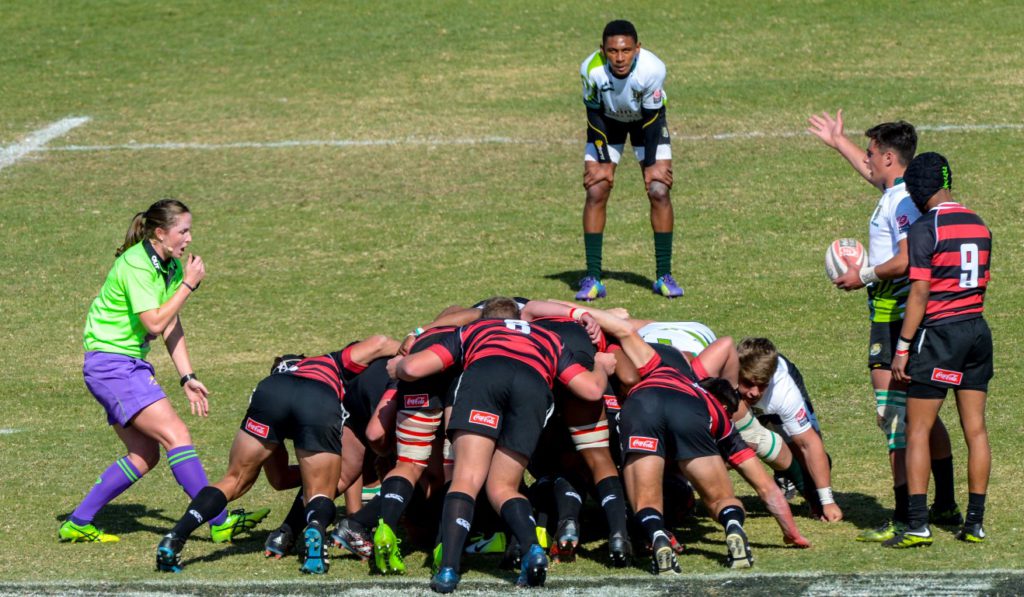 Aimee Barrett officiating during day 2 of the 2017 U/18 Coca-Cola Craven Week at St Stithians College. Photo by Sydney Seshibedi/Gallo Images

A handful of teams in the U18 Coca-Cola Craven Week and Coca-Cola Academy Week on Wednesday ensured that they have a chance to stake a claim for a place in the final match of the respective tournaments on Saturday as they remained unbeaten in their penultimate matches at St Stithians College.

The Bidvest Waltons Golden Lions, DHL Western Province, Free State and the Limpopo Blue Bulls finished their second round of matches unbeaten in their respective groups on Day 3 of the U18 Coca-Cola Craven Week, Wednesday. The event is taking place at St Stithians College, Johannesburg.

The hosts played to a 13-13 draw against DHL Western Province, who took top honours at the tournament last season, in a thrilling finish to the day’s play, while Free State beat the Pumas 63-41 and the Limpopo Blue Bulls outplayed Border 59-41 in a fantastic day’s action.

The clash between DHL Western Province and Bidvest Waltons Golden Lions was epic as both sides showed pure determination on attack and defence, which resulted in a tight tussle from the outset.

The Cape side struck first in the opening minute of the clash as Angelo Davids scored in the corner and that proved to be the only points in the first half, as the home team struggled to use their chances and lost several lineout balls.

DHL WP touched down again in the opening exchanges of the second half, through Thaakir Abrahams, but the hosts forced their way back into the clash with two well-worked but unconverted tries by David Cary and Tino Swanepoel to level the scores at 10-10. Kennedy Mpeku for the home team and Quan Eymann for the Capetonians traded penalty goals which saw them tied at 13-13 in the dying minutes, and with neither team able to add to their score, this proved to be the end result.

The clash between Free State and the Pumas was gripping as the Bloemfontein side build up an encouraging 21-8 lead, but a yellow card in the 22nd minute paved the way for the Pumas to fight back strongly and close the gap 21-20 going into the break.

Free State retained possession and applied pressure on attack in the second half, while the Pumas’ balanced performance kept them in the game early in the third quarter. The Mpumalanga side’s efforts, however, were not good enough to stop the Free State from making their presence felt and they increased their try tally to nine, while they limited the Pumas to six for the 63-41.

The third day of the U18 Coca-Cola Craven Week got off to an exciting start as the Tshepa Trading Griffons ran circles around Border CD from start to end for an emphatic 80-5 victory. Such was their dominance, they were 53-0 up at the break, and then built on this in the second half to earn an impressive 14 tries. Three players in the Welkom side scored hat-tricks, namely Verlyn Van Vollenhoven, Truimp Boloyi and Andrew Kota, while Kota also slotted over four conversions for a personal.

Boland made the most of GWK Griquas CD’s mistakes in the first half to work their way to a 32-21 victory as they scored five tries to the opposition’s three. Boland ran in four tries in the first half and limited GWK Griquas CD to one for a 27-7 lead, and this laid the foundation for their victory, as they leaked two converted tries in the second half. This comeback, however, was too little too late.

A staggering 100 points and two hat-tricks were scored in the clash between the Limpopo Blue Bulls and Border as both teams ran hard on attack and took advantage of the porous defence. The strong Limpopo forwards stamped their authority up-front, which allowed the team to build up a 35-20 lead, and they increased their points tally to 59 points in the second half. Border centre Siphamandla Matsinya also made a good contribution to his team’s score as he scored three of their tries.