Divers get the lowdown on dams 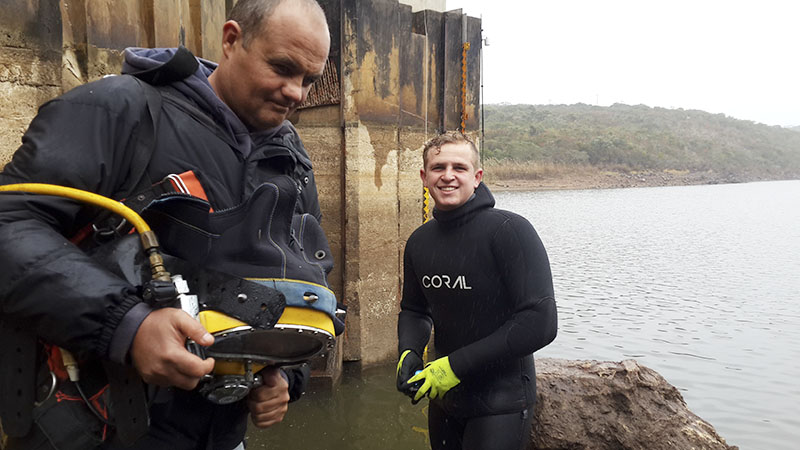 As residents awaited the water cuts they were told would be instituted after the National Arts Festival, service reporting organisation MobiSAM, reported that Settlers Dam was down to 24% of capacity and Howieson’s Poort 58%.

And according to divers on site this week, of four supply inlets to Howieson’s Poort Dam, the deepest is blocked with silt and another is well above the water level. The other two outlets are open and operating enough to allow water into the dam feeding Grahamstown’s western water treatment works.

Settlers Dam feeds into Howieson’s Poort and commercial divers Blackwater Divers this week investigated the infrastructure at the two dams, to establish how to extend the town’s water supply.

Team leader Martin Victor said the scope of their work was to look at the state of the inlets on the water towers and clear debris from them.

Speaking to Grocott’s Mail yesterday, Victor said that at Settlers the inlet area was clear and the deepest level was 10 metres.

“We’re operating at the lowest inlet there now, which is at a level of about 8m – so you still have 8m of head pressure there. That inlet is serviceable,” Victor said.

“The other two inlets there are above the water. There is some maintenance to be done, but the operating inlet is currently functioning.”

At Howieson’s Poort, were Victor was speaking ahead of the dive there, the top inlet was out of the water and the team was investigating the others, two of which turned out to be blocked. The expected depth there was around 8 metres.

Site representative for the project managers Boss Projects, Sebastian Dech, said initial visual investigations had been conducted three weeks ago on all the dams in Makana Municipality.

“Not only the dams with concrete walls – even the smaller dams with mud walls,” Dech said.

“We decided we needed to bring in divers to see what was happening underwater.”

The divers’ report would be submitted to Makana Municipality and Amatola Water.

The project is funded by the Municipal Infrastructure Grant (MIG) and in addition to the dam investigations, the contractors are in the process of upgrading the rising main from Settlers, which feeds Howieson’s Poort, as well as the pipeline from HP to Waainek Water Treatment Works.

Makana managed to keep the water running during the National Arts Festival and acting municipal manager Dali Mlenzana was upbeat as he came out of a Mayoral Committee meeting this week.

“There was water, there was electricity, the streets were clean and many of the potholes were sorted out by the time visitors arrived. While there is a lot for us to improve on in future years, in terms of providing services and providing a conducive urban environment, we are proud of what we have done under trying circumstances.”

The call for full administration of the municipality was discussed at that meeting, which was held on the eve of an exploration by blackwater divers that would finally reveal the truth about the state of the town’s western water supply.

Mlenzana reiterated Makana’s position that the move came from sincere concern for the interests of the community and that as such their response would be conciliatory.

“These are members of our community and we know that everyone has the interests of the community at heart,” Mlenzana said. “We will seek to engage with the three organisations concerned to map a way forwards.”

Mlenzana said among the issues to be discussed were some misconceptions that were evident in the report the group circulated to councillors, municipal officials and members of the media.

Of the town’s water situation, Mlenzana confirmed the divers’ investigation.

“Once we have their report, we will have the basis to make plans to make every effort to extend water availability,” said Mlenzana, whose fulltime job is Director of Infrastructure and Technical Services.

He said problems with a backwash valve at the Jame Kleynhans Water Treatment Works in the east meant the third backup pump there had not yet been aligned.