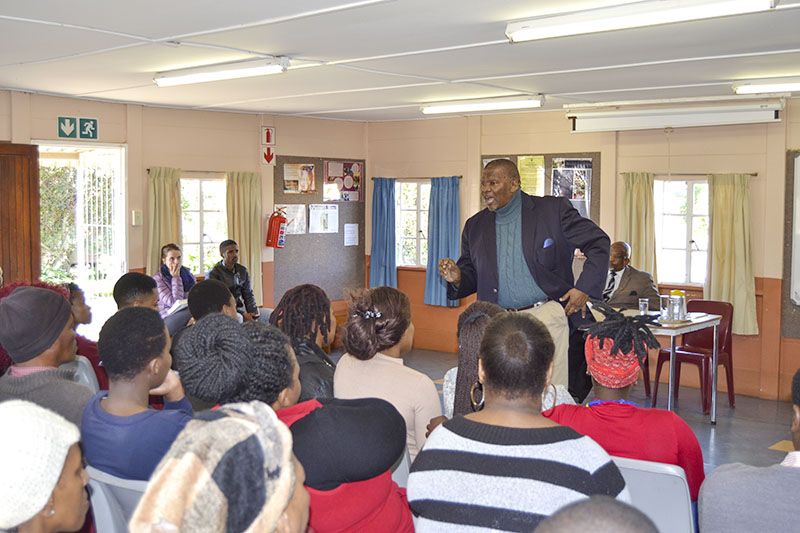 The Assumption Development Center filled their rooms with Joza location’s youth, all attentively interacting in the Nelson Mandela Day dialogue facilitated by Minister of Rural Development and Land Reform, Gugile Nkwinti, with the aid of another Grahamstown local legend Ramie Xonxa. This session was a kickstarter for the Minister and Rhodes University’s Vice-Chancelor, Dr Sizwe Mabizela, who are taking part in the Trading Lives week from Friday 14 July.

The youth of Grahamstown are facing intense issues everyday, that amass substance abuse, teenage pregnancy as well as a lack of desire to further their studies. As a Grahamstown-born man, Nkwinti is well aware of these challenges. Senior locals that have established themselves do not usualy adress them in terms of life lessons; to the detriment of the youth. Rhodes University Community Engagement’s Nosipho Nkwinti welcomed guests and opend the floor for Minister Nkwinti.

Assumption Development Center had asked Minister Nkwinti to speak about democracy to the youth, and indeed his enlightened self imparted knowledge in a conversational style. He gave the youth a frame of what democracy is, however “a frame needs to have a picture in order to be complete”, he said. Nkwinti went further, and touched on six pillars of democracy that people should hold dearly, to live harmoniously and productively. His analogy of the six pillars were three pairs of “twins”.The first pair of twins are Rights and Responsibilties. “It’s important that we as the people excercise our rights, in a manner that is not detrimental to the person next to you”, he said.

The second pair of twins he spoke of are Duties and Services, which he spent more time on elabourating on the premise of “duties begin at home”. He encouraged the youth, to start at home and analyse their living situation, and to use that as their fuel to get up and find something for themselves. “If the youth of today were more in tune with where they come from, they would make the initiative of being productive. Crime and teenage pregnancy are some of the results of this”, said the Minister. He connected these pillars, and made a perfect example of how they can lead to initiatives such as Assumption Development Centre.

His last two pillars were Opportunities and Constraints, which he said are his favourite. It is vital for one to use the prior pillars and connect them to opportunism. He stresses that we should not try to find shortcuts, but rather use what we have to get where we need to be.