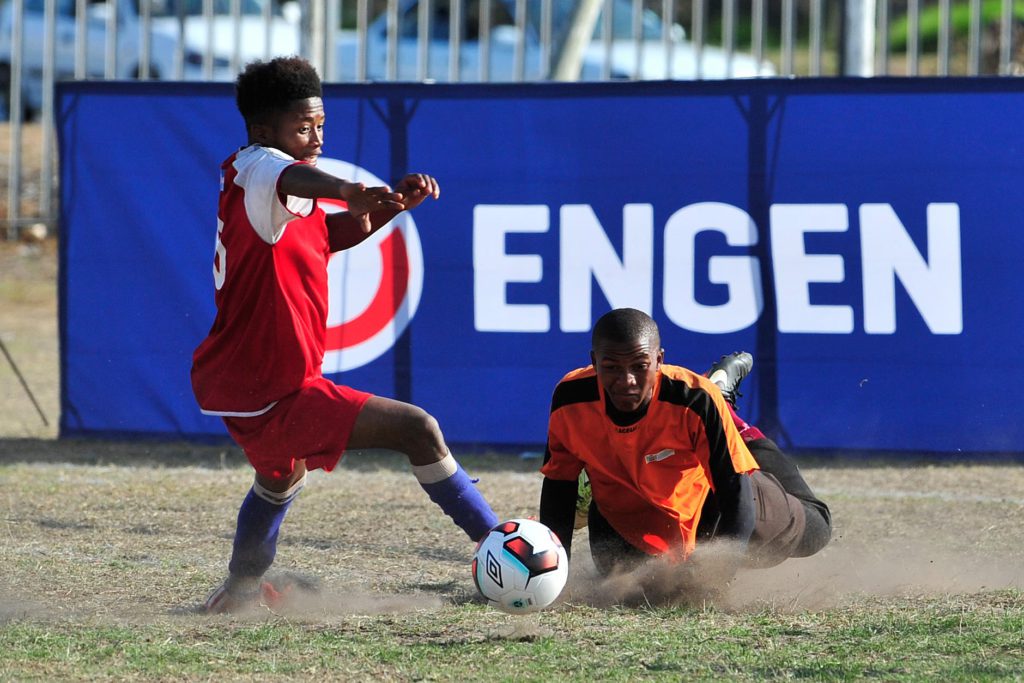 Anele Hashe of Grahamstown soccer club, City Pirates was named the “Best Goalkeeper” at the end of the Engen Knockout Challenge in Port Elizabeth. Photo: Supplied

A goal by Vuyolwethu Dlabango early in the first half sealed the result for the Motherwell-based champions. Dlabango found the back of the net with a low-drive after intercepting a defensive clearance.

Over an actioned-packed weekend, 16 of the best under-17 youth teams from around the Eastern Cape contested the 2017 Engen Knockout Challenge, Port Elizabeth leg.

In the first semi-final City Pirates beat PE Sundowns 5-3 in a penalty shootout. In the second semi-final Shining Stars beat Friendly City FC 1 – 0 to book their place in the final. On their way to the final, City Pirates knocked out the defending Eastern Cape Engen Knockout Challenge winners, Chippa United.

Anele Hashe of City Pirates was named the “Best Goalkeeper” at the end of the tournament. Siyabonga Masinda, development manager at Sakhulutsha Soccer Development Project in Grahamstown walked away with the individual accolade as the coach of the tournament. Masinda took part in the South African Football Association’s coaches B license workshop.

“City Pirates played very well, the boys deserve to be in that position,” said Akhona Akon who represented the MLFA at the challenge. “They were exceptional on the field and were unlucky not to walk away as Champions of ENGEN Tournament”, said Akon.

Speaking after the final, the tournament’s convenor of selectors Duncan Crowie commended the players for the fine football on display over the three days.

“This past weekend scouts from SuperSport United, Mamelodi Sundowns, Ajax Cape Town as well as representatives from Prosport International were all seen at the Glenville Celtic Sports Complex. This is a clear indication of the expected player quality of this tournament,” said Crowie.

“I trust that the Engen Knockout Challenge will again launch the professional football careers of many of these budding talents,” added the former Santos and Bafana Bafana legend.

“Both teams provided entertaining football in the final and I am delighted to have again seen an extremely high level of play throughout the tournament,” said Bergh.

Shining Stars, as winners of the Port Elizabeth Engen Knockout Challenge, will battle it out with other regional champions in the Engen Champ of Champs later in the year to determine the overall national champions.

“Engen is proud to be a part of the development of these young future football stars, further contributing to the realisation of their dream of being signed professionally,” added Bergh.

The other individual award winners included:

The remaining regional rounds of the 2017 Engen Knockout Challenge are as follows: –