Business as usual after factory fire 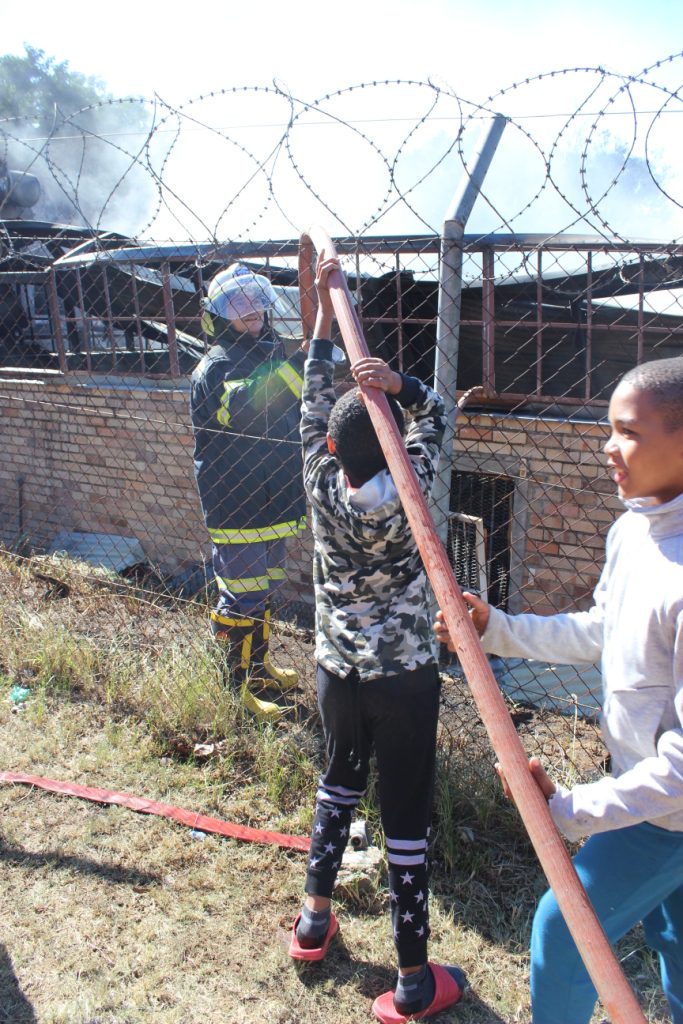 (Left) the home of Jean Burgess and her three sons was gutted by a fire on Thursday 13 April which destroyed a wing of the Birch’s clothing factory next door. Photo: Steven Lang

By Sue Maclennan and Chesley Daniels

It’s business as usual for the Birch’s clothing factory in Grahamstown, despite a devastating fire on the eve of Rhodes University’s graduation. The company supplies hundreds of academic gowns for the six graduation ceremonies taking this week. Meanwhile the family whose house on the adjacent property was gutted, is picking up the pieces of their lives, as they struggle to get back on their feet.

Like other staff, Director at T Birch & Company, Nick Mowbray was shocked at the news of the fire and its devastating effects; however, as far as Rhodes graduation was concerned, it was “one hundred percent business as usual”.

“There have been no interruptions whatsoever,” Mowbray told Grocott’s Mail this week. “Everything ordered for graduation had been made already and none of it was stored on the factory premises.”

Many of those who work at the factory live nearby and some rushed to the scene when the fire broke out. Several were distraught and in tears – as much out of shock as the fear they were watching their livelihoods go up in smoke.

However, Mowbray said the buildings were insured and job losses weren’t on the cards.

“As we speak we are making contingency plans to get production going while we rebuild the burnt part of the factory,” he said. “We aren’t anticipating suffering any job losses whatsoever.”

“We’ve ordered more materials which we expect will arrive in the next few days. We’re lucky to have a fantastic team on the ground who are working hard to get things up and running again. It’s a serious blow but we’ll get through it.”

Mowbray was full of praise for the Makana Fire Services which, he said, had done a fantastic job. The Army’s fire unit assisted on the night of the fire, and Rhodes University brought their water truck.

“We are extremely grateful to them and all the support we’ve had from the people of Grahamstown,” Mowbray said.

He said there was no indication of the cause of the fire. “Forensic investigators are looking into it,” he said.

Well known cultural activist Jean Burgess was at home when the fire started. Her property adjoins the Birch’s factory, on the side where the fire was, even sharing a boundary wall. Her Froude Street house was gutted.

“Terrified doesn’t even begin to describe how I felt,” Burgess told Grocott’s Mail this week. “It was beyond fear, it was numbness – seeing everything, your whole life, just destroyed in 30 minutes.”

Neighbours and friends had arrived to help remove what they could. Burgess’s youngest son Jenino Jonkers takes in cars for repair and Kurt Solomon, whose auto-repair business KS Auto is nearby, was among those who came with tow trucks to remove vehicles parked in the yard.

“Everybody gave a hand, helping the family remove their possessions from the house to safety,” Solomon told Grocott’s Mail last week.

However, along with Jenino’s garden flat and his mechanical workshop, four cars took fire and exploded. Machines, car parts and compressors were destroyed.

It was beyond fear. It was numbness – seeing everything, your whole life, just destroyed in 30 minutes

The middle son Didier is a tattoo artist and is tools were likewise destroyed in the fire, Burgess said.

Burgess herself earns part-time income from sewing, as well as editing documents. “My sewing machine, my computer were burnt out,” she said. “I don’t think people realise the extent of the damage.”

She said the building was insured, but not the contents of the house. Currently, she says, she’s “squatting” at her sister’s while she looks for another house.

While the family’s means of earning a living were destroyed, it’s the tokens of her family’s history she most misses.

“The things you cannot buy,” Burgess said. “Photos of my great grandparents, family trinkets – and I don’t mean like like chairs, cups and plates that you can just buy in the shop. It’s the objects that for me represent intangible memories. There’s no money to replace those things that are lost.

“I don’t think there’s words in the English or Afrikaans vocabulary that can contain the way we feel.”

No injuries were reported in the blaze and at the time, police confirmed no foul play was suspected – although Birch’s have confirmed forensic investigations are under way.

He said the extended wing of the Froude Street factory had been saved, including the generator room.

Fire crews remained at the scene throughout the following day to extinguish the smouldering debris inside the factory and house.

She said police were called to the scene around 6pm last Thursday night, 13 April.

“At this stage no foul play is suspected. The cause of the fire is still to be determined. No criminal case is being investigated,” Govender said.

Another fire, another time

Chesley Daniels, who co-reported this incident, did so with difficulty. He lost six family members when their home, metres away from the Birch’s factory, caught fire on 31 May 2004. Here he recalls that terrible night.

The cause of the 2004 fire was an electrical fault, which had caused a problem many times also with previous owners.

My aunt, Millicent Billet, was  busy doing washing outside in the morning when the washing machine gave her an electric shock.

Although it tripped and stopped, the shock gave my aunt a pain in her chest and she was hospitalised.

I went out that afternoon with friends to the Yeoman’s sports bar and my Aunt’s husband, Charles Billet, a correctional officer, was working a night shift.

The fire started that night while I was still out.

Charles came home and found the house on fire. At that time, I was sleeping at the home of an uncle who lived close to the sportsbar.

I realised he was still alive.

At midnight, my other aunt ran into the room, screaming my name and crying, telling us our house was on fire.

We rushed there and went to help the fire fighters, police and ambulance try to open the doors and windows.

But when we eventually got in, we found Charles, my sister Melvinnia, who was 17, and my cousins, Fiona (15) Comienne (10), Caleb (five) and Mikyle (23 months), all lying on the floor where they were trying to escape.

Cyle (five), who is the twin brother of Caleb, was also lying there – but then I realised he was still alive.

I carried him out to the ambulance and he was rushed to hospital. He was the only survivor.

The next day was the saddest part because we had to go to hospital to break the sad news to my aunt, who had been there since the previous day. She was devastated when she heard the news

The next day it was all in the news because the SABC arrived at our house. The Minister of Correctional Services also came to offer their assistance.