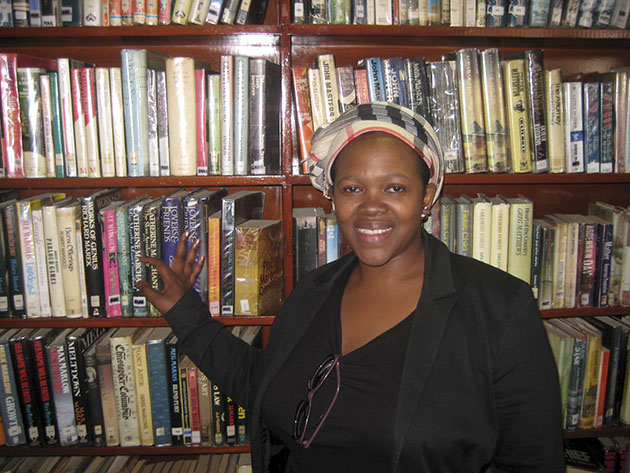 On the same day the head of Makana Public Libraries informed councillors that the municipality was about to lose internet services and computers, Arts and Culture MEC

announced that 30 libraries in the Eastern Cape would be established as libraries of excellence, to serve as community development centres.

However, head librarian Patricia Njilo was assisted by Councillor Brian Fargher in explaining that the current situation in the libraries was “chaotic”.

“There are four entities assisting with computers and internet services,” Fargher said.

Njilo said the District Municipality had withdrawn its services for exactly that reason. “They say we should have one system run by one organisation,” Njilo said.

Makana is still in negotiations with the Department of Sport, Recreation, Arts and Culture about having them take over the service.
Fargher said, “We need a single policy. If entities bring materials, they must fit into one existing system.”

Njilo confirmed that the Hill Street (town) library would reopen after being closed for renovations for almost a year.

National Library Week would be celebrated next week, with Wednesday 22 March earmarked for reopening the library.

While in local government, library services fall under the portfolio of Social Development, in the province they fall under arts and culture.

And in her policy speech on Wednesday, libraries were on the agenda when Majodina unpacked her R895 944 million budget.

Under Library and Archive services, she announced an allocation of R2 million for Mzansi Libraries Online – a programme to identify and establish 30 more libraries of excellence to serve as community development centres.

The sum of R7.9m is earmarked for upgrading Information and Communication Technology across libraries, with 20 libraries to be configured into SITA Library Information Management System (SLIMS) in the 2017/18 financial year.

This is set to improve management of information and accountability for library material in libraries, Majodina said.

“In partnership with the National Library of South Africa, the Department will provide internet access to an additional 30 libraries with the aim of bridging the digital divide between rich and the poor.”

Library infrastructure in the province will receive R9.8m.

Close to home, Alice (R5.8m) will get a new library built.

The conversion of classrooms into libraries in rural communities will receive R1m.

Oral history
Even closer to home, the Department will pursue the Oral History project of the kwa-Ndancama forced removals in Grahamstown.
This would grow library collections, which in turn would attract more public participation in the Department’s archives.

“This seeks to promote and preserve oral history with a view of capturing silent voices and muted identities, especially African experiences during the colonial era,” Majodina said.

A documentary on Wars of Resistance would form part of the programme components.

Young people are targeted in Majodina’s budget, through the Young Patriots Programme.

“To instil a sense of patriotism, nation building and social cohesion amongst the youth, especially those in school, the Department in partnership with Department of Arts and Culture (DAC) and National Youth Development Agency (NYDA) will roll out a programme of flag verification, hoisting of flags in schools and stage social cohesion and nation building dialogues,” Majodina said.

A R15m budget to celebrate in institutionalised days will see all national days commemorated in the context of the life and times of Oliver Tambo, as part of Tambo’s centenary, starting in April.

Each of the Eastern Cape’s eight districts will have a sub-theme – for example, in the Alfred Nzo District it will be ‘Alfred Nzo as a Long Serving Secretary-General under President OR Tambo and in the OR Tambo District, ‘Nelson Mandela as a Political and Life-Time Ally of OR Tambo’.

In the Sarah Baartman District, under which Makana Municipality falls, it is ‘Sarah Baartman as an International Symbol of Racial Discrimination and Oppression’.