City is ready for Fest 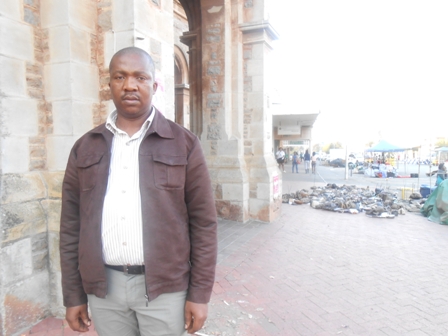 A municipal workers’ strike planned for this morning is just one of the possible crises city officials are ready to manage during the National Arts Festival, from 3 to 13 July.

A municipal workers’ strike planned for this morning is just one of the possible crises city officials are ready to manage during the National Arts Festival, from 3 to 13 July.

In an interview with Grocott's Mail on Wednesday 2 July director of infrastructure Thembinkosi Myalato outlined plans to keep the city running at full throttle, even under pressure.

He said Grahamstown had systems in place to support the more than 100 000 visitors who attend.

The city’s most recent water troubles are under control, Myalato said.

A five-day water outage in high-lying areas last week, on the eve of Festival, sparked fears that the city was unprepared.

Myalato said the technical issues leading to the outage had been resolved. “But there’s always the ‘what if’,” he said. “If something does go wrong we’ve got water trucks on standby and Jojo tanks ready to install where they’re needed. We’ve also got plumbers on standby.”

He said the city’s bulk water supply was secure. “Both water treatment plants have a standby pump that’s functional and commissioned.”

He emphasised that Amatola Water were still managing the plants. Commenting on the water utility’s shock announcement last Thursday that they were pulling out of bulk water management in this municipality, he said he had received nothing in writing to say this was their intention.

“I will say categorically that as Makana Municipality, we have signed a five-year contract with Amatola. That has not changed. They are on site right now, working.”

Teams were also working around the clock fixing the many water leaks that have sprung up in the past few months as a result of dramatic variations in pressure on the ageing infrastructure.

And to prevent the dramatic temporary increase in the city’s population leading to blocked sewers, mainline pipes in busy areas such as New Street will be flushed using high-pressure hydraulic jets.

“That way we shouldn’t get any overflow spillages,” Myalato said, emphasising that all the city’s plans applied both to the CBD and the township.

“And we’ll have warm bodies on standby to unblock drains.”

Myalato said all the city’s electrical substations had been maintained and would be able to meet the increased demand.

“We’ve brought in extra staff, and extra material,” he said. “There are local contractors on standby.”

“And you’ll see our festive lights are working.”

For the Festival Myalato’s infrastructure directorate sits on a joint operations structure with Festival management and the city’s cleansing, traffic, disaster management and community safety authorities.

He said plans were in place to manage this morning’s strike by municipal employees from the South African Municipal Workers Union and the Independent Municipal and Allied Trade Union.

The protesters will gather at 9am at Jackie’s in Dr Jacob Zuma Drive and march to the traffic circle on the station end of High Street.

Other security plans were in place, he said, and potholes were being fixed both in the township and the CBD.

Myalato is excited about the Festival closing concert, a first for the Festival. Taking place at JD Dlepu stadium in Joza, it will feature some major rap and hip-hop acts.

“We’re going to make sure everything goes right for this top-class event,” he said. We’ll be providing extra water tanks, enough toilets and security.”

The official opening of the 40th National Arts festival was last night.

Tthe first event on the programme today is the drama, Undermined, in the Princess Alice Hall at 10am.

At midday a theatre piece about veteran rights activist Ben Mafani, The Ghost of Glenmore, will be staged at the Masonic Front. It's written by stage manager at the Port Elizabeth Opera House Khaya Voko, who was moved by Mafani's years-long struggle for justice and personal peace.

“Don’t worry, Festival will be a success,” Myalato said.

If something does go wrong:

Previous ArticleFest 2014: The fun has arrived!
Next Article Talented rugby on show