‘I’m not going to be ashamed’ 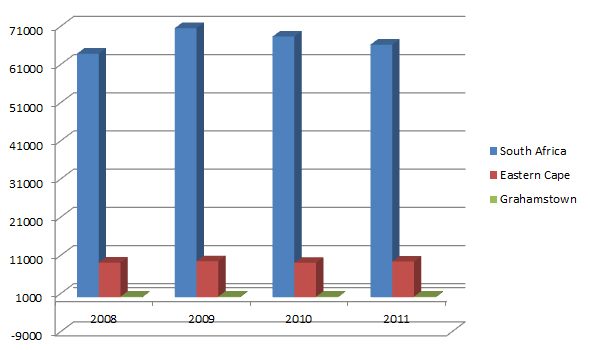 Just over a year ago Hlalani township resident Nosiphokazi Fihlani was stabbed and raped because she was a lesbian. She didn't report this to the police, but has decided to speak out to give hope to other women who have suffered sexual abuse and to show that corrective rape can't change her.

Just over a year ago Hlalani township resident Nosiphokazi Fihlani was stabbed and raped because she was a lesbian. She didn't report this to the police, but has decided to speak out to give hope to other women who have suffered sexual abuse and to show that corrective rape can't change her.

Here she tells Grocott's Mail her story.
In the early hours of Saturday 4 June 2011, Fihlani was heading home alone from a night out with friends when a group of men accosted her, taunting her and making homophobic remarks. As their insults and behaviour became more violent, she tried to escape but one of the men chased her and cornered Fihlani in a public bathroom where she had no choice but to fight back.

“He tried to hold my hands so I couldn’t hit him and when that didn’t work he hit my head against the wall,” she said. “I tried fighting back but he had a knife and he started stabbing me.” The scars are still visible on her hands and back.

The man eventually struck her hard enough to render her unconscious and when she woke up naked some hours later, she realised she had been raped and her clothes had been stolen.
“They raped me because I’m a lesbian. They think it will change me,” she said.

Because Fihlani is one of very few women brave enough to speak out about corrective rape, it is impossible to know how many lesbians have been raped because of their sexual orientation.

But instances of corrective rape in South Africa are increasingly being highlighted by local and international media with CNN and the UK’s Channel 4 featuring some of the most recent shocking cases.

“I want people to know what happened to me, Fihlani said. “If I keep quiet these men will continue raping lesbians. People need to know that raping me is not going to change who I am.”

These statistics, available on the SAPS website, reflect all sexual crimes but without distinction between rape or corrective rape.

Although these figures indicate a decline since 2009, they only reflect reported cases and are not a true reflection of all the sexual crimes committed in South Africa.

In a statement issued by the South African Human Rights Commission in 2011 it was explained that: “Unlike in other countries, South Africa’s crime statistics do not provide for a separate category for hate crimes, this means that it is hard to gauge the levels of hate crime in the country. Many incidents are likely to have gone undetected.”

This limitation in determining the amount of corrective rape cases in South Africa poses a serious legal problem in prosecuting suspects. The cases are not regarded as a hate crime and therefore efforts in recognising and limiting the violence committed against gay people are restricted.

The Equality Act, passed in 2000, specifically prohibits discrimination and hate crimes against people because of their association with a specific group.

However, non-profit organisation ActionAid released a report on corrective rape stating that “in practice the only cases that have been brought to trial are on the basis of race and gender. A legal and criminal justice system that is largely unresponsive to the problem means that attackers are rarely brought to justice”.