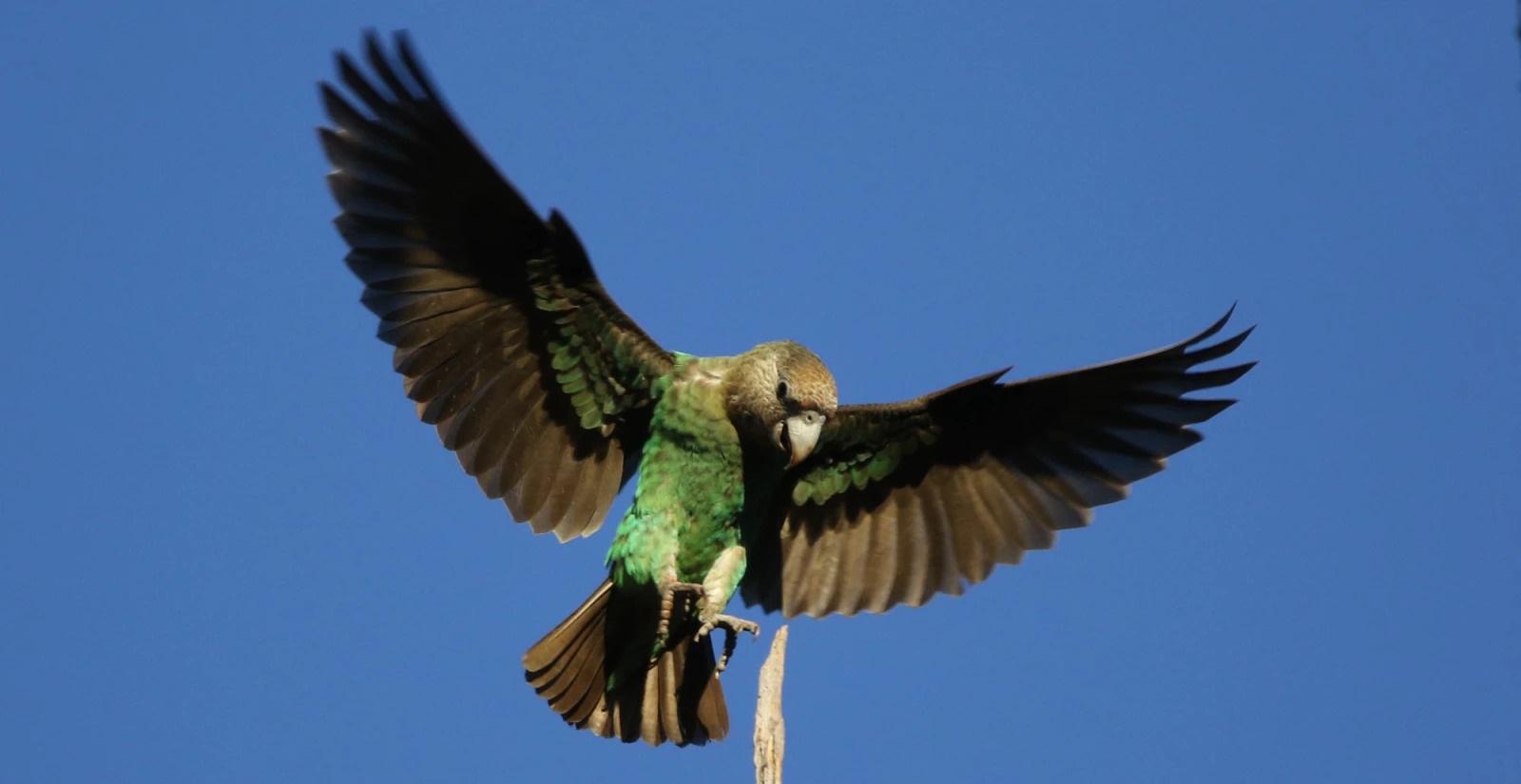 Cape parrots are a critically endangered species. Endemic to South Africa, the Cape parrot finds its home in the hollows of the yellowwood tree, which has been a victim of deforestation. The Cape Parrot Project is looking to restore the yellowwood and thus the home and population of the Cape parrot. Photo: Cassie Carstens

A partnership project is making solid efforts to conserve the critically endangered Cape parrot, increasing the means to sustain the birds and their natural habitat while empowering the surrounding community.

The partnership between the Cape Parrot Project, the Wild Bird Trust and Fairtree has embarked on an initiative to restore yellowwood trees, the preferred habitat of the Cape parrot, the only endemic parrot species in South Africa.

Operating around the Eastern Cape’s Amathole Mountains in the Hogsback areas of Sompondo and isiKhululweni, the project upskills the surrounding communities by establishing local tree nurseries, with community residents as custodians of the trees.

Communities collect, plant and germinate seeds and nurture the trees until they have grown large enough to be planted in the surrounding restoration sites where habitat and land have been degraded. Once the seedlings reach a planting height of 40cm, they are bought by the Cape Parrot Project, providing a source of income for the 28 growers.

Dr Kirsten Wimberger, the director of the Cape Parrot Project and a trustee of the Wild Bird Trust, told Our Burning Planet the project had three objectives: researching the birds (as little is known about them), reforestation of their habitat, and empowering the community.

“[The parrots’] habitat was destroyed 100 years ago when historical logging happened in these forests — we go about restoring these forests to try and provide a habitat for them that we’re going to see in 50 to 100 years because it takes so long for these yellowwoods to grow.

“And community is the thing that holds everything together. We find the community aspect of the project so important and is the only way we will be successful in our conservation efforts,” Wimberger said.

The project kicked off with micro-nurseries where yellowwood seedlings were grown in community members’ yards, with the Cape Parrot Project repurchasing the seedlings once they had sprouted. But the threat of water security meant the project was remodelled by building community nurseries where groups worked in an area with JoJo tanks to mitigate water shortages.

Yellowwood trees provide a home for Cape parrots — a population of just under 2,000 — and nutrition for the birds from the fruit. While the project has empowered the community through the seed buy-back initiative and upskilling them in conservation, results for the threatened Cape parrot population are likely only to be seen more than 50 years from now.

The project conserves the numbers of parrots as it helps manage the relationship between the community and parrots and minimises poaching — the second biggest threat to the Cape parrot after infection and mortality caused by disease, the South African National Biodiversity Institute states.

“There were some poaching incidents at the pecan orchard in Fort Hare, and this is where the community’s involvement was foremost; we can’t conserve something if people are not on the same page. It’s people’s heritage, and we had to have the involvement of everybody,” said Wimberger.

Alton Mayekiso from Sompondo started working with the Cape Parrot Project in 2017. He is a manager on the project and ensures that the work at nurseries is done according to regulations while achieving the project’s goals.

“This project is important to the community because it teaches them to look after nature; they should not burn pastures, not cut down trees that the parrot is dependent on. So it helps to educate the community on that,” Mayekiso said.

He said the project had taught the community the importance of indigenous plants and trees and their role in maintaining the balance of nature.

The project also fulfils the Department of Forestry, Fisheries and the Environment’s (DFFE’s) mandate of monitoring forests and ensuring that “we don’t see forest destruction in our lifetime,” Wimberger said.

“Maybe in 100 years we can start to see the benefits, so everything is all long term, but the trees we plant provide a lot of diversity, and we plant a lot of yellowwood that provides nests and food for the parrot.”

Susan Wishart, project manager of the Cape Parrot Project, said the project would initiate a pilot study that would be expanded to areas where parrots are found, as well as identifying priority forests for parrot conservation in the future in areas such as Limpopo.

“The initial process for the reforestation is that we ordinarily get funded to do projects. In addition to our experienced team, we always hire additional people from the community … and we hire some on a contract basis,” said Wishart. “We don’t only plant yellowwoods because there aren’t just yellowwoods in the forest. We restore the forest as it should be.”

In addition to forest restoration, the project facilitates environmental camps, forest walks and educational programmes for the community and schools to empower them further to look after their environment.

Said Mayekiso: “People see this as an improvement in development because they can see that help can come from their hands and that help can also conserve the [Cape parrots].”

This article first appeared in The Daily Maverick’s Burning Planet.