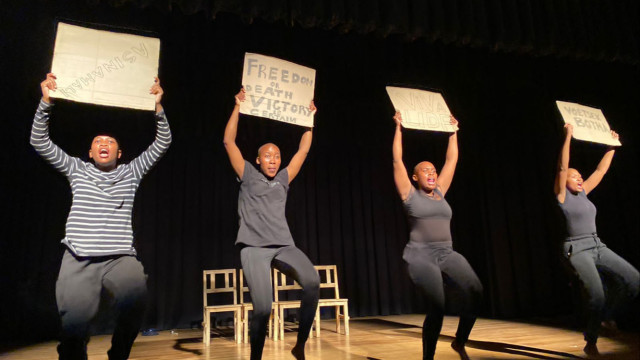 By STEVE KRETZMANN, Cue arts editor and The Critter editor

Festival’s halfway mark has slipped by in a haze of plays, exhibitions, conversations, drinks, meals, and occasional showers as concepts and ideas stack up, interlinking and winding their way into every facet of life, layering the mundane and prosaic with meaning.

During the compressed, concentrated existence within the Festival, small talk involves exchanging thoughts and observations on theatrical and artistic productions and discussing what is next to see on the programme. As Fest barrels toward the final weekend, there is always the Fear of Missing Out lurking on the sidelines, no matter how much you’ve seen or plan to see. A list of potential highlights to tick off helps keep the FOMO at bay, but it cannot be banished altogether. Perhaps there’s a sleeper hit on the Fringe, maybe even something off the programme altogether that we won’t get to hear about until it’s over. Who knows? But in the simmering pot of creative expression that is the National Arts Festival, word is quick to get out. Eavesdropping and engaging with your fellow humans (a skill we’re all relearning) is essential.

But we do what we can. Here’s a list of suggestions for your last four days. Take some chances; it is merely a guide, not a map.

Mbongeni Ngema is a big name, not just in South Africa. His 1987 musical Sarafina is world-renowned. Lesser known is the work which brought him the acclaim that gave him the platform for his musical about the student uprising of 1976. Asinamali, first performed in 1983, is about the violence, forced separation, and racism experienced by five prisoners. Amidst a programme featuring numerous plays dealing with gender-based violence, Ngema’s hit musical is being performed by a cast of women – a first. It runs from 30 June to 2 July.

While Asinamali deals with apartheid atrocity, Marikana – 10 Years On reveals how the horrific post-apartheid massacre of 34 miners in the platinum belt has affected the families of those killed and the lives of those who survived. On 30 June (today), there’s a walkabout of the exhibition of work created by widows and survivors in art therapy workshops conducted by Khulumani workshops, as well as photos by Paul Botes, with a panel discussion on 2 July. The work is a culmination of ten years of documentation together with the people directly affected by the event, which shattered our rainbow nation notions of a state that would never again turn against its people.

Left of field and perhaps reconnecting us with the absurd is the Dr Hokaspokas Show, a play based on a reality TV show in which a remedy must be found for the King to regain his ability to laugh and so save his health and marriage. It could be great fun, or so bad it’s good.

A general sure-fire crowd-pleaser is Urban Circus which gives us all the thrilling acrobatics and oohs and aahs of hard-to-believe physical feats packed into a theatre show on the massive Guy Butler stage in the Monument. Directed by Daniel Buckland, who was part of global awestrikers Circe du Soleil for a good while, it’s an all-ages celebration of the spectacular.

For more intellectual engagement, there’s an intriguing play written by Frantz Fanon, so oft-quoted and misquoted in the decolonial project. The Drowning Eye reveals a seldom-considered side to the celebrated social philosopher: love and surreality. A philosophical treatise on love as an act of resistance conceptualised by Stacy Hardy and Tamara Guhrs, with Guhrs directing performers from the KwaSha Theatre company. The play is acted within an installation.

With love and resistance in mind, there’s Waya-Waya, at the artist’s studio, where the everyday act of picking through the mounting detritus of our capitalist-driven consumerism and estrangement from natural production is practised by Nyaniso Lindi.

In the arresting, thoughtful, quiet work of Clara Delorme, in which every movement is a suspense, we see the body come apart from itself, our very limbs discovered anew. That’s just the first performance. The second part of this captivating double bill sees her reclaim her own art and agency in the face of patriarchal views of sexuality. There are two shows today, after which you might have to visit France to see her again.

Bassist and former SBYA winner Benjamin Jephta, who can push Marcus Wyatt on a trumpet solo, is a treat at what is now the National Jazz Festival, but be warned: Standard Bank pulled out of this Festival of incredible music at late notice, and while the venue is the same, it doesn’t look the same. There’s no stretch tent and bar outside. Inside, however, the hall is warm and filled with sound and newly dressed, with a surprise bonus: no corporate banners that have come to define jazz shows in South Africa and the world.

Île is a lovely show; Sophie Joans is entertaining and full of expression. It’s funny and well-made, with Rob van Vuuren directing it towards his signature blend of comedy with a touch of physical theatre and a generous dose of staging. It’s professional and enjoyable and avoids cliché.

There’s the use of the body as a means of expression and conceptual communication, with Samuel Beckett’s Waiting for Godot inspiring Standard Bank Young Artist Award winner for dance Kristi-Leigh Gresse’s work Purgatory – “A Working Title” in what promises to be an eviscerating take on the state of the country.

Or you could watch Rob van Vuuren, possibly the only comedian who can make you cry in Still Standing.

It’s live, alive, and will never happen in the same way again. Come play. Even the weather is predicted to play along.