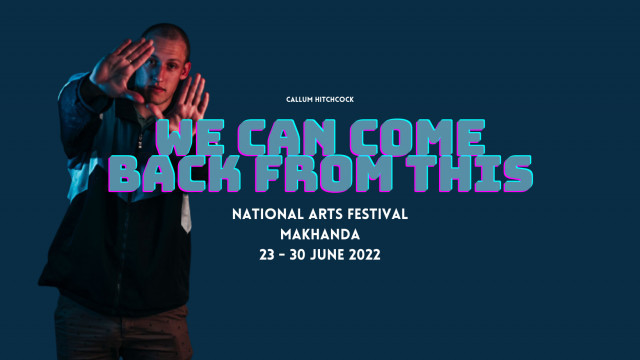 COMEDY: We Can Come Back From This
Review by CASEY LUDICK

Most parents avoid the topic of sex altogether, never mind offering to buy sex toys while driving home from school.

The anecdote formed the opening of Abrahams’ opening set in We Can Come Back From This, the banner title for a selection of comedians playing at the National Arts Festival.

The show’s headliner, Cape Town comic Callum Hitchcock, welcomed guests at the door, trying to pass on a free ticket, saying, “Do you wanna see some standup comedy?” while nodding in the way a parent would when encouraging a toddler about to pee in their pants that they should go to the toilet. With only eight people in the audience, it was no wonder freebies were being foisted on passers-by. Things were looking bleak.

Yet, Hitchcock delivered punchline after punchline, leaving the eight of us in stitches. He created a safe space for everyone but farmers as he recounted stories of his teenage years in East London while plying us with suggestions on how “we can come back from this”. ‘This’, being two years of lockdowns.

The tech crew were not on form, what with faulty microphones at play. However, we still got the acerbic commentary on the tonal differences between South African cities, the Cape Town cool guy aesthetic, and half-cooked jokes about Hitchcock’s romantic relationships.

Hitchcock and his mates presented a blend of sarcasm and self-deprecation, although some lean more towards vulgarity than comedy. Hitchcock himself oiled the wheels with punchy anecdotes and relatable stories and managed to comment on South African politics without sounding too much like a white saviour.

We Can Come Back From This has its last show on June 27 at 4 pm.