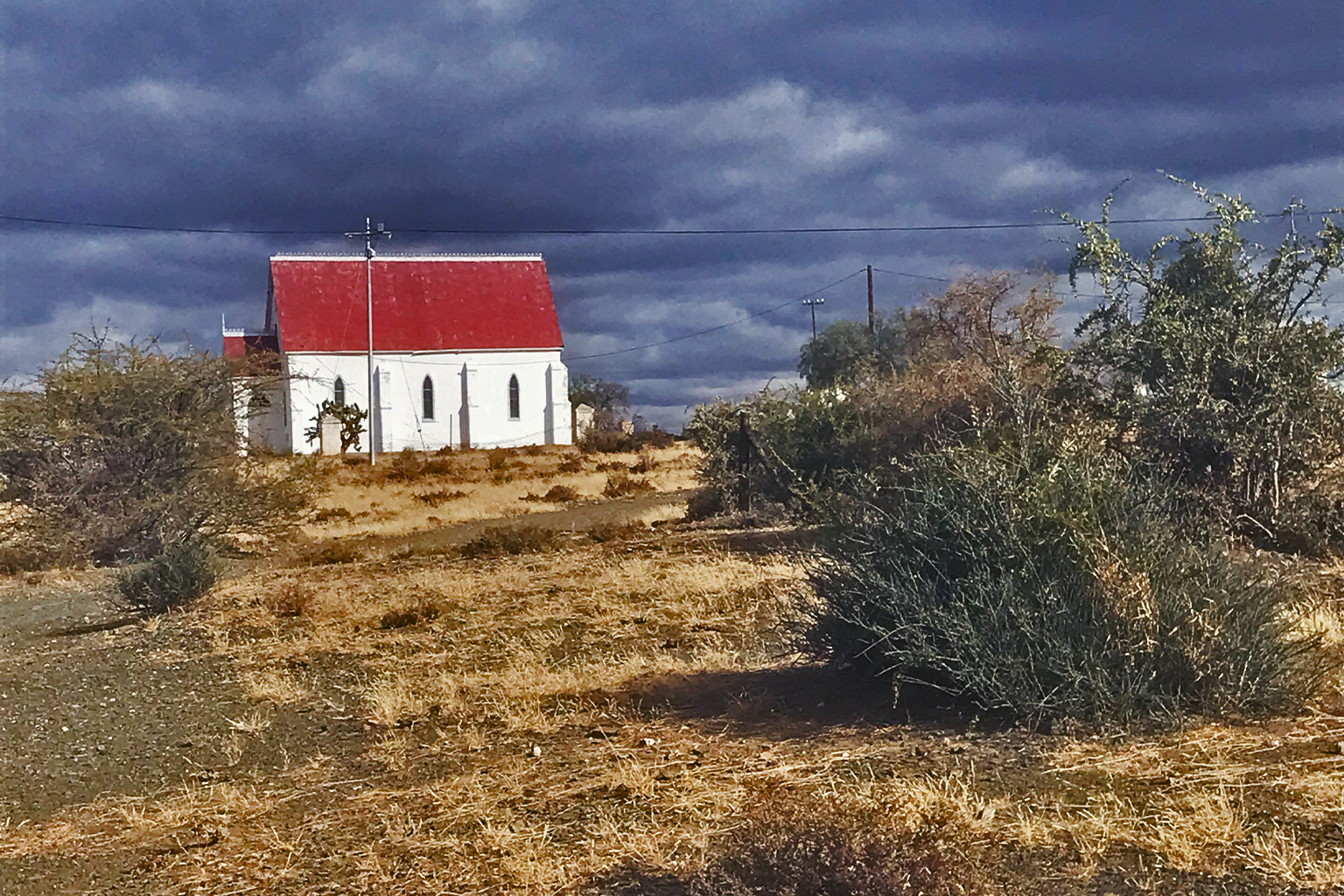 Large parts of this region were previously covered in spekboom. AfriCarbon wants to use the sale of carbon credits to fund the restoration of the thickets. Image courtesy of Anna Majavu.

About 80 km inland from the coastal city of Gqeberha, a brilliant patch of green stands out against a landscape recovering from six years of drought. The rudimentary fence of wooden poles and chicken wire surrounding it has been knocked over in places by kudu, steenbok and other local antelope species, as well as neighbouring farmer’s goats, all eager to get at the dense stands of an indigenous succulent: spekboom.

This fenced-off area on the Steenbok Vlakte game farm is one of 300 similar plots of spekboom (Portulacaria afra) scattered along 800 km of South Africa’s Eastern and Western Cape provinces in a million-hectare band that was once dominated by mixed thickets of this remarkable plant. In a restoration project launched in 2009, botanists from Gqeberha’s Nelson Mandela University tried out 13 different methods of planting spekboom in plots measuring 50 by 50 meters (164 by 164 feet), intended to assess how to restore the entire strip.

Underneath each of the now-12-year-old plants in the test plot, the branches that grow laterally along the ground have sprung roots wherever the plant’s leaves touch the ground, birthing hundreds of new spekboom, what the botanists fondly call the skirt of the plant. The plot is so successful that the farm’s owner, Johannes de Lange, has planted another 9 hectares (22 acres) of his land with cuttings he and his workers took from the plants on the trial plot.

Spekboom is often dubbed a climate change “wonder plant” for its ability to sequester large amounts of carbon. For decades, it has been cleared away by farmers and overgrazed by livestock and wild game, and only 200,000 hectares (494,000 acres) of the indigenous thicket remain in the Eastern Cape.

Duker says overgrazing by sheep, cows and goats has led to soil erosion and the degradation of indigenous plants in the area. Many farmers saw antelope as an alternative, able to thrive on sparser grazing. But they soon realized that “game still trashes the plants,” Duker says.

“When land is bare soil, with less than 20% vegetation cover and receives less than 300mm of rain a year, by definition, it becomes a desert,” he says. To continue carrying herds of goat or antelope, much of the veld (land) must now be rested for 11 months. This means that large farms must fence off sections of land to allow it to restore itself anyway, meaning they may as well use that time to restore the spekboom thicket.

Spekboom regeneration is also vital to preventing soil erosion. The soil in the region is prone to developing a hard and impermeable “cap,” which means that when rain does fall, it can’t soak into the ground. Instead, it runs off, washing soil away along suddenly bursting channels.

“Everyone is pleased when the dams are overflowing, but this is very often a product of the soil being so capped in the catchment. If there were proper infiltration, there would be a steady water supply, and you wouldn’t get boom and bust on the dams,” Duker says.

At Steenbok Vlakte, Duker sinks his hands into the ground beneath one of the plants and pulls out a handful of rich soil filled with worms, snail shells and insect carcasses.

“The key to spekboom’s soil-restoring properties is in the skirt. It creates a nice cool little microclimate underneath it, enabling a spontaneous return of biodiversity,” he says, explaining that droppings from birds containing native tree seeds germinate and grow in the moist microclimate.

“So just by putting one species — spekboom — in, you get a whole bunch of animal species returning and other tree and shrub species that are indigenous to the thicket. You can get 100 species coming back and restore the whole ecosystem,” he says.

The government has planted 50 million cuttings on 2,000 hectares (4,900 acres), but Dukker estimates 5 billion spekboom cuttings will be needed to restore the thicket across its former range.

Duker and fellow botanist Keith Steunenberg also work for AfriCarbon, a South African company that generates carbon credits from restoring degraded thicket, mainly with spekboom. Neither can see where funding for restoration of spekboom across its historical range could come from other than carbon credits. The project they’re working on now received some philanthropic funding to set up the test sites, but Steunenberg says that’s not enough. “You need to attract outside investment where people get a return, and the carbon market opens up that opportunity. It speeds up restoration of ecosystems.”

The botanists estimate that ten years after planting, a hectare of restored spekboom will sequester between 5 and 10 metric tons of carbon dioxide per hectare per year. Current prices would earn the landowner $100 per hectare (R1550).

Wide-scale restoration of spekboom could also create thousands of jobs in the Eastern Cape’s rural areas, where the unemployment rate is estimated to be as high as 85%.

Doing much less well across this region are isolated towns such as Klipplaat, population 9,000, surrounded by commercial farms and little else. Severe drought — and, more recently, the COVID-19-related lockdowns — has seen employment on these farms dry up and unemployment and hunger escalate so much that residents depend on food aid from charities.

With no public recreation areas, shops, banks or government offices, and the nearest town is 35 km away and only accessible by expensive private transport, “Klipplaat is a sad town,” Duker says.

“Yet there are farms that were covered in spekboom years ago that could be planted again. If you scaled up to 5,000 hectares [12,400 acres] in that area, that’s 500 people being employed — pretty much all of the unemployment in Klipplaat would be ended for at least the two-year duration of the project,” Duker says.

Because the planting can’t be mechanized, Duker says he’s confident that this work would pay above the minimum wage, and there would be at least some permanent employment in jobs monitoring the success of the thicket growth.

The Eastern Cape Water Caucus, an umbrella group of small-scale farmers and environmental activist organizations in the province, agrees that there’s potential for jobs planting spekboom to help revive prospects for residents of rural areas.

The caucus coordinator, Ntsika Mateta, says rural communities could also benefit from growing spekboom in villages and on communal land in the province, not for carbon credits, but for their own use.

In many villages across the Klein Karoo, families own small herds of livestock that bring in a vital income when sold at the end of the year. Spekboom could be grown as a drought-resistant fodder and also help protect other vegetation from being overgrazed, Mateta tells Mongabay.

And people could also eat spekboom themselves. “Our society is faced with multiple chronic illnesses due to all the unnatural food dumped on us by commercial farmers, retail corporates and pharmaceutical industries who are greedy for profit at the expense of people’s lives. This plant comes with many benefits and is already used in many Southern African communities as a source of food in salads, as a raw vegetable, and in juice,” Mateta says.

Researcher David Hallowes from the nonprofit environmental justice organization groundWork says that rewilding, soil restoration and land conservation must be kept separate from “selling credits for some polluter somewhere else.” While emissions are certain, measurable, and occurring now, spekboom rethicketing as an offset measure is “highly uncertain since the spekboom may easily be cleared or lost again,” Hallowes says.

He points out, too, that the assumed carbon sink in spekboom farms would be delayed over the years of the plant’s growth.

Restoring thickets to offset greenhouse gas emissions doesn’t have a solid basis in science, Hallowes tells Mongabay, explaining that “living” carbon, which circulates between land, air and ocean in a fast carbon cycle, isn’t exchangeable with “dead” carbon from the much, much slower geological cycle of carbon circulation.

“Land restoration can compensate for past damage and carbon loss on that land. It does not compensate for — or offset — emissions from burning fossil fuels,” he says.

Duker and Steunenberg say the carbon market is about to take off. They would rather see barren land restored with spekboom thickets than attempts to establish monoculture plantations of other potential carbon-sucking vegetation.

Near the test plot on Steenbok Vlakte is a lonely jacket plum tree (Pappea capensis). These slow-growing trees also form part of the Eastern Cape’s indigenous thicket. Jacket plums can live for several hundred years, but they, too, have been overgrazed.

This tree’s seedlings only germinate and survive under spekboom’s protective skirt, Duker says. “If you take spekboom out, these trees start to die, and they cannot come back without spekboom in the landscape. So these are the last remnant trees of the thicket, gradually dying out. If we don’t plant spekboom, most of these trees will go and eventually, you will have a completely barren landscape.”

As the land goes, so do the people. Erosion and desertification caused by almost a century of commercial agriculture and increasingly frequent drought mean that many of the farms in South Africa’s Klein Karoo may have few better options than to restore spekboom thickets if they are ever going to be able to carry herds of livestock or wild antelope again.

This article was first published by Mongabay.com

Previous ArticleHow and what should children be taught about sex and sexuality?
Next Article Reaching for a citizen-centred community journalism