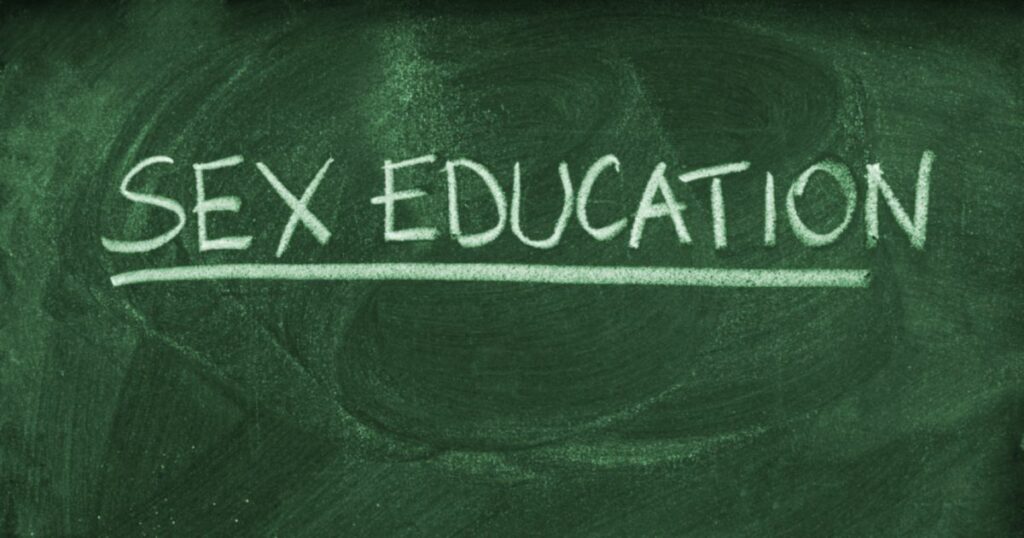 CSE was a government syllabus developed over 20 years ago. But resistance from organisations, parents, and educators meant that only 5% of South Africans schools were teaching sex education by 2016.

Opposing organisations, such as STOP CSE and Concerned Young People of South Africa, have accused the CSE syllabus of teaching promiscuity, promoting contraception and “alternative” (homosexual) sexual practices, and exposing children to pornographic content. This, they argue, encourages engagement in sexual activity and experimentation and disregards parental and traditional values.

Yet, we have seen some of the highest recorded numbers for teenage pregnancy, gender-based and sexual violence in the last year.  Between April 2021 to end of June 2021, 10 006 cases of rape were registered in South Africa.

The Eastern Cape remained among the highest provincial teenage pregnancy rates, at 16,7%  from 2019 to 2020.

This may show that teaching fear and trauma-based abstinence and sexual health, stigmatised contraceptive methods and conservative views on sexuality may not be helpful.

CSE promotes consent, bodily autonomy, communication, honesty, awareness of rights and responsibilities, sexual health maintenance, planning and accountability. Yet many educational institutions and parents have chosen to disregard this syllabus after the Basic Health Minister announced in 2019 that it was no longer compulsory.

Instead, youth continue to receive sexuality education from unsupported sources that have potentially damaging consequences for developing their sexual health and identity.

A fear tactic used in schools to promote abstinence includes showing pupils severe graphic images of sexually transmitted infections (STIs). Instead of teaching, for educational purposes, what realistic symptoms of STIs may appear as in early stages of infection, so they may be recognised and treated early, images of cystic hepatitis and tertiary-stage syphilis are shown instead. This leaves pupils unable to identify early-stage symptoms, placing them at risk of developing more severe infections.

Students in Johannesburg year after year attend a sex education camp run by Love Matters, which hosts multiple school groups at the Johannesburg Bosco Centre. Love Matters states on their website that they aim to “bridge the gap in sexual reproductive health information between young people, sexual health experts, educators and services.“

Yet, multiple students who were previously encouraged by their schools to attend this sex education camp revealed what it actually taught them.

One year, a class of 15-year-olds were shown an outdated video of a third-trimester abortion in graphic detail, causing trauma and confusion for them. It failed to outline the safe medical abortion options for those who may need one in the present or the future.

A student who attended the camp in 2016 said, “It’s misleading and just traumatising!”

Another student shared how the doctor hired to teach the program shared homophobic and transphobic sentiments, claiming that homosexuality and transgender identities were wrong and did not make sense based on “our biological genitalia.”

Very often, all examples in sex education pertain to a heteronormative sexual relationship, leaving LGBTIAQ+ youth excluded. This limits students and may cause students questioning their sexual or gender identity to feel further outcast.

“They take us away from everything we know, our comfort zones like our families and our schools for a week and indoctrinate us so that we can’t go home at the end of the day and ask questions,” a student who attended the camp in 2018 says in retrospect.

After a week of camp, students are encouraged to sign a celibacy pledge publicly. This practice further polarises the groups of students as the majority often resort to signing after a week of fear-based learnings which are not fully comprehensive.

“I’m still scarred from having to sign an abstinence pledge in front of the whole grade. Initially, I didn’t want to sign one because I didn’t want to hold myself to that, but I felt pressured to do it ’cause everyone was watching and judging the people that didn’t go do it,” explains a student who attended in 2018.

By providing youth with censored education about their sexual rights and health, they are left vulnerable and may seek out answers in spaces that are not safe, such as from older persons who may take advantage of them.

Love Matters was approached several times for comment but failed to respond.

Sex education often places the burden of responsibility on girls and young women. Interviewees shared some of the messages they had received during sex education lessons.

These include: “Keep the R10 note between your legs safe, ladies!” and “Don’t wear promiscuous clothing!”

Behind these phrases is always the justification or argument that it is being said to keep them safe. Still, there is a fine line between safety and not holding boys and young men accountable for their role in sexual health, pregnancy, and violence.

If it is not the comments and education that hold girl children accountable for sexual violence, pregnancy and health, it is the inverse lack of education and acceptance of sexualisation of young ‘boy’ children.

It is the lack of acknowledgement of relationships between young ‘boys’ and older women or men, as paedophilic. Instead, friends and peers often reward these instances for having sexual experiences early and for channelling their ‘natural’ sexual desires.

Sexual desires are a natural occurrence for everyone, and there are healthy ways to manage and express them. Yet when it is left undiscussed, we may see harmful expressions of sexual interest become habits.

Youth will continue to explore their sexuality and gender with or without guidance. Despite concerns from parents and educators about exploring topics of sexual rights and health encouraging irresponsible sexual activity, there is no evidence to support this.

“In fact, the opposite is true. Young people who understand their bodies and feel empowered to access sexual and reproductive health services are more likely to delay sexual debut and more likely to practise safe sex if sexually active,” Macleod responds to these concerns.

Comprehensive Sexual Education has the potential to educate South African youth to protect themselves better and respect others through stages of sexual and self-exploration.

There is no linear and straightforward solution to eradicate issues of sexual violence, STIs, and teenage pregnancies, but engaging in conversations that hold accountability, empower and protect our youth as concerned parents, educators and friends is a good place to start.

Previous ArticleWhat does it mean to create safe spaces for the disclosure of abuse?
Next Article A community response to gender-based violence