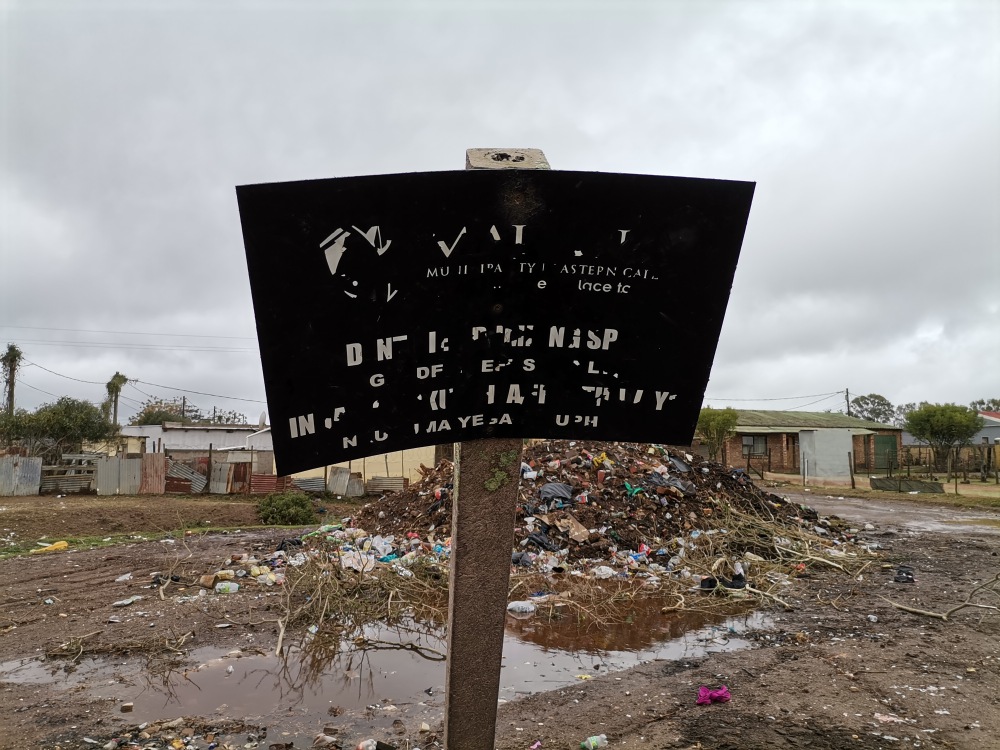 The ruling party has ignored protests and court orders, leaving the Makana in a state of collapse. The Makana Citizens Front (MCF) is offering an alternative to party politics, writes Anna Majavu of New Frame.

The Makana Citizens Front (MCF) believes it is racing against time to save the city from total collapse after the municipality ignored yet another high court order to eradicate seven informal dumping sites by 29 September. The municipality managed to clear away only two.

Makhanda’s townships have no regular garbage removal services. Residents are forced to pile up waste in open areas while businesses dump their rubbish illegally.

Some MCF councillor candidates, such as Zongezile Wellington Tsotsa of ward five in Joza, have worked for years with their neighbours to devise schedules to burn their garbage. “It is terribly unhealthy for us, but we have no other choice. I clean here every single day early in the morning, but when I come back from work, it looks like that, especially when the wind blows,” Tsotsa says, gesturing to the garbage that has blown up against his fence.

Mary Waters High School and Ezihagwini Street Committee, represented by the Legal Resources Centre, won a high court order against the Makana municipality in mid-September, compelling the municipality to clean up all dumpsites within 14 days and provide garbage bags to every resident.

But within a week, residents contacted MCF interim convenor Lungile Mxube alleging that when they went to interviews for “piece jobs” to clean up the garbage by hand, they were asked to pay municipal officials R1 000 to secure the work.

The rubbish is just one of many problems MCF’s ward councillor candidates have identified, along with corruption, hunger, sewage leaks, crime in derelict municipal buildings, gender-based violence and a lack of clean water.

There are 14 ward councillor candidates who have decades of free service to the community under their belts. They include a law student, youth workers, marathon runners, two popular religious leaders, activists who campaign against gender-based violence, the leader of a local hiking club, the administrator of the ratepayers’ association, several people who coordinate township sports foundations, and several women described by residents as “servants of the community” for their work in food kitchens, water provision and in caring for the vulnerable.

The MCF’s proportional representation list is full of similar community-minded individuals, including a former school principal, advocacy staff from a local non-profit organisation and citizens who run food kitchens in a town plagued by hunger.

Mxube is a former ANC and South African Communist Party leader who was fired from a few municipalities for blowing the whistle on corruption. Now working in the office of Gqeberha mayor Nqaba Bhanga of the Democratic Alliance (DA), Mxube was instrumental in brokering a deal earlier this year between the United Front, the African Christian Democratic Party, the Congress of the People, the DA and the United Democratic Movement to take control of the Nelson Mandela Bay municipality.

Unemployed Peoples’ Movement leader Ayanda Kota, who led the successful high court case to dissolve the Makana municipality in 2020, plans all the campaign activities of the MCF while Rhodes university computer science lecturer and councillor candidate Philip Machanick spends hours on Electoral Commission of South Africa (IEC) paperwork, making sure everyone is registered correctly and doing media for the campaign.

A community collective
With just a month until the elections, the MCF still has no funding. An activist prints two banners on credit, a sympathiser pays for 120 T-shirts, and some of the town’s residents photocopy 800 flyers. But what the Front lacks in money, it makes up for in human resources. In the four weeks since it launched its campaign, the MCF has attracted over 200 volunteers for unpaid party agents’ roles and another 300 volunteers who go door to door every day, convincing residents to vote for the MCF.

The coalition is highly organised, conducting workshops with dozens of councillor candidates, party agents and volunteers almost every week. Former ANC leaders in the MCF provide inside information on how election results can be skewed. Most of the IEC officials are ANC party agents, they allege. At one workshop session, it is agreed that each voting station needs eight volunteer party agents who can work in shifts so that four will be available during the night after the votes close, which is allegedly when votes for other parties “go missing”.

Public meetings are held on patches of open land. Without fail, residents of the town express disgust at the ANC. “Why do they have to steal everything? Why not just take a small amount for themselves and use the rest for the community?” is the most common refrain.

One night, ward 10 councillor candidate Mxolisi Ntshiba and Kota drove around Tyantyi township with a loudhailer, inviting residents to a meeting. A group of angry residents approached the car shouting, “Voetsek ANC, voetsek [go away]! You are so cruel! We don’t want you here.” But when Kota put his head out the window, the group ululated and shouted, “We will vote for you, Kota!”

There are no ANC posters in the town and very few public meetings, which annoys residents. “You see how the ANC takes us for granted? They think they don’t even need to campaign,” said residents in Vukani at one of the public meetings.

On voter registration weekend, an MCF party agent who asked not to be named was assaulted by two ANC party agents in full regalia at a registration table. A video of the assault circulated widely, prompting an apology by the ANC and a comment by the sole EFF councillor, Siyamthanda Dyantyie, that the assault was “service delivery at its best. Phof!! They are planning a march against GBV.”

Evidence of dysfunction
On the campaign trail, the stench of leaking sewage fills the air. At the public meetings, garbage blows onto residents, who inhale toxic dust.

Negligence resulted in the death of 13-year-old Asenele Qomfo, who drowned on 25 September after falling into a 1.8m-deep trench dug the day before by contractors, who had accidentally burst a water pipe, filling the trench to the brim.

After Qomfo’s death, the trench remained filled with water until the time of publication. MCF councillor candidates spent three hours on 28 September trying to dig channels to release some of the water.

The 2019/20 Auditor-General’s report into Makana municipality found that the municipality did not account for all property, equipment and land wasted over R900 million on irregular and unauthorised expenditure, and was being investigated by the police for financial misconduct. Tenders were awarded, but there were “under achievements” on the projects. This is a town that does not have a single playground in any area.

This is life in a “captured municipality,” says Jonathan Walton, fieldworker at the Black Sash’s Makhanda office and a supporter of the MCF. “The evidence of the dysfunctionality is in the different reports … there is weak management in place or incompetent or unqualified managers or staff or councillors who were elected from the ruling party or the opposition who have not done their jobs to ensure that the decisions the council took are consistent with the constitution and the rule of law,” says Walton.

“Unfortunately, the media did not pay too much attention to municipal capture as the focus was more at a national level, yet there is a lot of corruption and fraud in municipalities, especially around procurement and awarding of tenders.

“Makana Municipality has conducted itself outside the law. There is no transparency, there is non-compliance with the law, and you can call it delinquent or a habitual lawbreaker.”

The ANC seems to have little regard for the people of the municipality. The high court ordered the municipality to dissolve itself in January 2020 for failing in its constitutional obligations to provide services – the first municipality ever ordered to do so. But this has been delayed for the past 20 months after the Eastern Cape premier Oscar Mabuyane – an important President Cyril Ramaphosa supporter – appealed the judgment twice, using public funds.

Kota frequently speaks of the “rot” in the ANC, which has led to the municipality failing to maintain basic infrastructure, much of which has now collapsed.

Power of the people
Dozens of MCF party agents piled into borrowed bakkies on Heritage Day to go with ward 13 councillor candidate Reverend Milo Geelbooi to Manley Flats. In several public meetings, Geelbooi has promised to donate half his first month’s salary to buy food parcels for needy residents. He attracts dozens of residents to his campaign meetings in a corrugated iron room that serves as his church. Former farm dwellers at Manley Flats speak of how the government bought them two farms and gave them 10 shipping containers to live in but did not provide toilets, electricity, or any other amenities apart from a minimal supply of drinking water.

They have lost hope in all political parties, they say. Geelbooi explains: “The MCF is not a political party. We are not like the ANC. It is an organisation of the community. You are known for not casting your vote. But you must never be silent again. The pain you have is the pain we have too in [Makhanda]. You work hard here for a living. You don’t get tenders. The MCF is not the ANC. With MCF, we will all be equal.”

Mluleki Mtjizana of the Yendela Community Property Association – a farm bought by the government for farm dwellers – describes life in this area as “terrible, really”.

“We were born in these mud houses, and we live here still. The democracy they’ve been talking about, we see that in the towns. On our farms, we are still struggling; we don’t have anything here. I am glad if … this new party can resolve all the sufferings because we suffer here [for a]long time,” Mtjizana says.