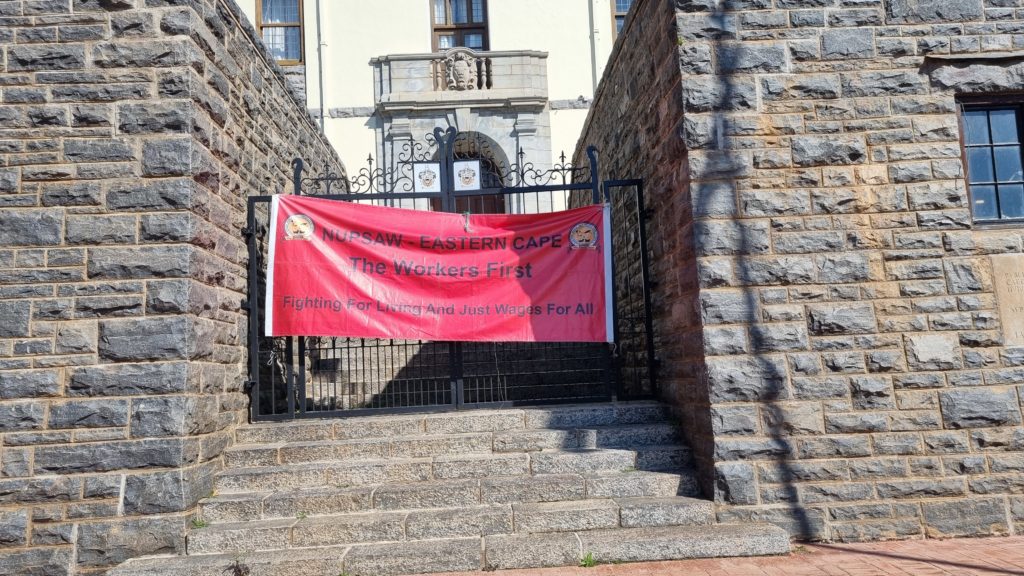 By Rod Amner and Bianca McLean

“No work, no pay” is Rhodes University’s response to a week-long strike by over 100 workers affiliated with the National Union of Public Service and Allied Workers (Nupsaw).

Nupsaw and Rhodes are locked in a dispute over whether the union is sufficiently representative to qualify for organisation rights on campus.

When asked why the university would not recognise Nupsaw, Rhodes acting Director for Human Resources Susan Robertson said Nupsaw had not complied with the provisions of the Labour Relations Act as outlined in Section 21(2), which states that the union must supply “the facts relied upon to demonstrate that it is a representative trade union”.

Robertson said that after receiving a letter from Nupsaw on 29 April seeking organisational rights, the University consulted its records against the list with the names of staff members that Nupsaw indicated had joined them.

“The University’s records showed that the majority of the staff members on the list submitted by Nupsaw were members of the South African Liberated Public-Sector Workers Union (Salipswu), and as such there was no evidence as per section 21(2)(b) of the LRA of the facts relied upon to demonstrate that NUPSAW was a representative union or that staff had joined NUPSAW,” Robertson said.

The Labour Relations Act does not prescribe the percentage of members a union needs to be “sufficiently representative”, nor does it allow employers to simply reject unions.

After Nupsaw referred the matter to the CCMA for conciliation, the university agreed to a verification process to establish whether Nupsaw is sufficiently representative as they claimed.

Nupsaw rejected this proposal, and a certificate confirming that the dispute remains unresolved was issued.

Nupsaw began the strike on 10 August, and Rhodes again met with Nupsaw on 13 August in a failed attempt to resolve the matter. A “no work, no pay” rule continues to be applied to the striking workers.

Explaining why she joined the strike to New Frame reporter Ann Majavu last week, a laundry worker, who asked that her name be withheld for fear of disciplinary action, said, “I have been working here for 15 years, but I am still on the same grade. I was a casual for eight years. Actually, there is no staff development here. You can stay on the same grade until you … reach your 65th birthday. We are not treated the same. If you ask how to get promoted, you won’t get any answer. There is no transparency.”

Another worker on the Nupsaw steering committee, also interviewed by New Frame, said transformation and a lack of staff development are key problems. “If you are a cook and you are asked to work as a supervisor for three years, the university will not make you permanent. They will hire someone from outside and say you don’t qualify even though you did the job for three years. Another thing, when you have a grievance against your manager, the university will listen to the manager, and you will get a letter saying you will be in trouble if you proceed with the grievance. In this place, there is no transformation or staff development.”

In response, Robertson said promotional opportunities this is not part of the dispute. “All support staff have the opportunity to apply for posts at a higher level. Several posts are advertised internally to facilitate advancement opportunities for staff.”

Robertson said the University had not infringed on workers’ rights, including freedom of association; it was merely requesting that Nupsaw complies with the provisions of the LRA as outlined in Section 21(2) of the Labour Relations Act.

She said that following the 13 August discussion, the CCMA had circulated a revised proposal for picketing rules.

Robertson said the university had not yet had a response from Nupsaw to confirm that they are in agreement with the proposal.

“With no picketing rules in place any protesting by its members on our premises is unlawful,” she added.