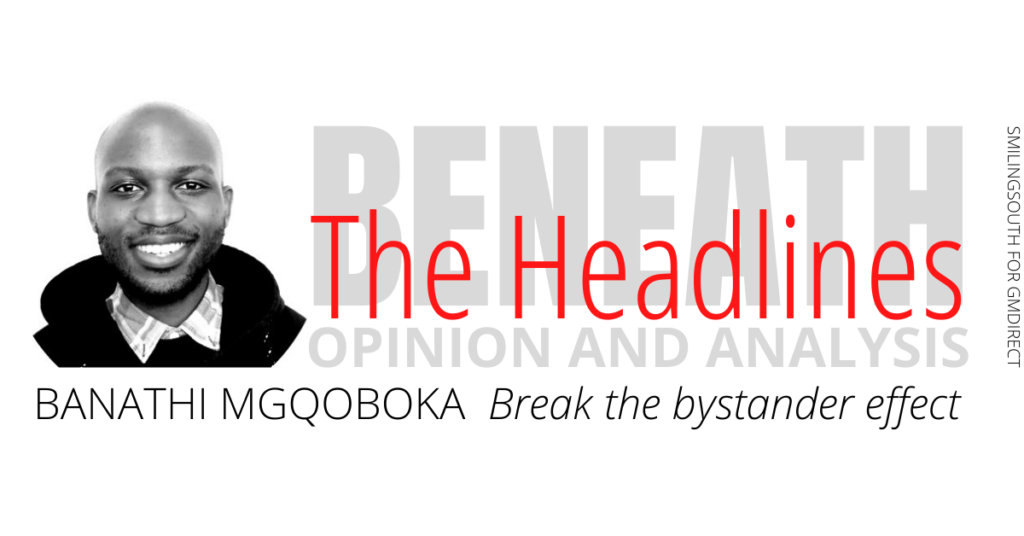 Don’t keep quiet: there are many ways to act against sexual misconduct that you witness, writes BANATHI MGQOBOKA

The act of bystanding during occurrences of sexual misconduct towards women and girls is a deeply problematic social issue. Acts of sexual misconduct which imply harassment, violence, assault or abuse are at a growing in South Africa. Between January and March of 2021, 12 133 sexual offence cases were reported as reflected in the fourth quarter 2020/2021 South African Police Service (SAPS) Crime Statistics. Within this tracking, the Eastern Cape alone recorded 2 024 cases. These sexual offence cases are explained by the SAPS to include rape, sexual assault, attempted sexual offences and contact sexual offences. Such sexual doings are not consented to and they frequently make a victim feel uncomfortable, afraid and vulnerable.

Too many of us are silent bystanders to sexual harassment. Why are we afraid to speak out? Or do we think it’s just far more expedient to mind our business? Mentally, this form of human behaviour might signal that we could suffer from the ‘bystander effect’ during such moral quandaries. According to psychological research, the solution to breaking these ranks of silence is to encourage helpful bystander responses.

“Often the focus is just on the perpetrator who’s the one committing the violence and the victim who’s the one receiving the violence. But what this specific theory draws attention to is actually how bystanders respond to the violence, whether they allow it to happen, intervene or encourage it. That is crucial to whether this violent interaction continues and perpetuates and even reproduces itself in other relationships or whether it stops,” said Young.

The relationship between the bystander effect and masculinity is a linkage that is essential to make when addressing issues of unsolicited sexual advances towards women and girls. Lindsay Kelland, a senior lecturer in the Allan Gray Centre for Leadership Ethics at Rhodes University’s Philosophy Department asserts that there’s an enabling culture among males in general to acquire sexual access.

“I think there’s something much deeper that’s added to that general kind of bystander effect phenomenon which is the meaning given to masculinity, particularly to sexual access – the relationship between sexual access, sexual activity and masculinity. A lot of cisgender men: men identifying as cisgender, have kind of a vested interest in not breaking ranks with the brotherhood. There’s kind of a sense of being responsible for one another in terms of not snitching on one another. But also getting into a culture where you’re more respected I think as a man if you do have access,” Kelland declared.

She [Lindsay] says conformity and the ‘power of the group’ plays a crucial role in the bystander effect. “The bystander effect is very much related to issues around conformity and the research has shown that we conform far more easily than we would want to if we were on our own. There’s something about the ‘power of the group’. If we don’t have a culture of speaking out then the perceived costs of speaking out are going to be very high.”

In order to cultivate a culture of fearlessly ‘speaking out’, it is significant to understand that the role of the bystander is central in stopping any inappropriate or violent interactions. Kathleen Dey, who is the director of Rape Crisis Cape Town Trust, a non-profit organisation that provides a safe space of support and empowerment for survivors of rape and other sexual offences states that rape and other forms of sexual misconduct and violence are designed to inflict helplessness to the person who’s receiving it.

“The helplessness extends to the bystanders and so what happens is the bystander doesn’t know exactly what to do. They feel paralysed, they feel trapped and, in some instances, they even want to turn away. Or you have that other effect where they actually enable.

“The first thing you have to do as a bystander is be conscious that what is happening around you is something you can change. There are so many ways you can intervene that don’t necessarily put you in danger because that’s one of the biggest fears of bystanders Is that they will suddenly become the target of whatever is going on that’s violent in front of them,” Dey says.

She offers us four bystander intervention methods that can encourage people to be active bystanders when they witness an act of sexual misconduct in front of them:

“Distracting the person or causing an interruption, any kind of interruption in whatever it is that they are engaged in.”

“To either move towards the victim and take her out of that situation. The most difficult decision would be to challenge the aggressor and call that person out which is not necessarily always the best thing to do because the big fear is that the aggressor will turn to you.”

“Call the police and draw attention from other people around If it happens to be a crowded area. But if there’s no one else around your options are then quite limited. But leaving the scene and calling the police is definitely a bystander intervention.”

Offer support to the victim

“Offering support to the victim is the last bystander intervention. This will make the victim or survivor of that incident feel safe, contained, supported and helped.”