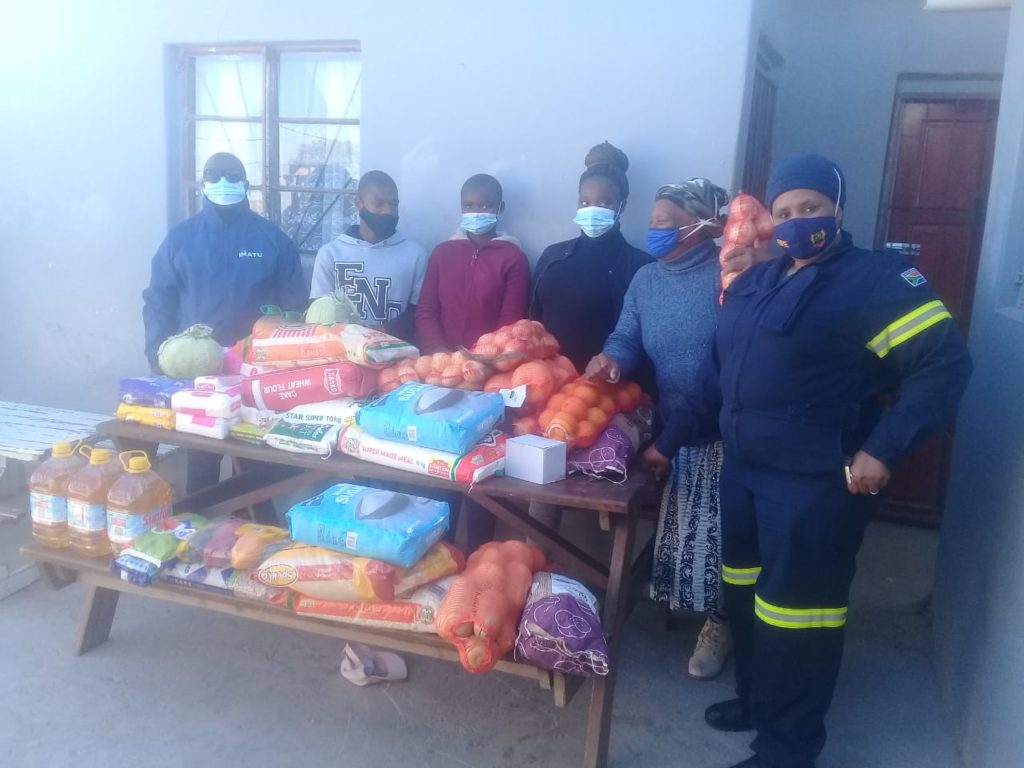 The Chairperson and Branch Secretary of trade union IMATU, Ntsiki Ntlanjeni and Thembinkosi Mashiyi, led a group of members to Joza children’s home, Home of Joy, where they made a donation of both perishable and non-perishable food. House Mother Margaret Ncanca was very grateful.

The Chairperson and Branch Secretary of trade union IMATU, Ntsiki Ntlanjeni and Thembinkosi Mashiyi, led a group of members to Joza children’s home, Home of Joy, where they made a donation of both perishable and non-perishable food. House Mother Margaret Ncanca was very grateful.

The Lulama Covid-19 Support Team Soup Kitchen served close to 500 people, thanks to donations they received. They also distributed clothes people had donated. SANCO conducted a cleanup campaign and collected items for recycling

Sanco conducted a cleanup programme and contributed to the local economy by collecting waste for recycling, thus assisting communities to start their own businesses. The Mandela Day programme started on Friday with Sanco’s Friday cleanup programme. Sanco Chairperson Xolani Simakuhle writes, “On Sunday we were led by pioneer youth with the elderly who share their support for the role played by Madiba. The week-long programme is in the Ward 5, Extension 4, 8, 9, 10, Transit Camp and Phumlani areas. I am Nontokozo Mchunu, a second year MA in JMS student at Rhodes University. After working on a film in and about Makhanda, I realised how much of a bubble I have been living in and I hated it very much.

I felt like this whole idea of pursuing success (whatever it may be) does not make sense to me if it does not benefit God’s people (the community I live in.) I could not fall asleep because of my conviction to do better and be a better person through using the skills I have to help make other people’s lives progressive.

I do not believe in charity, but rather progressive and empowering participation in and with the community. I had to act on my conviction and do something on Nelson Mandela day and I thought of painting a classroom in one of the schools in the township.

I then raised the funds by asking for donations from people I know.

My friend’s business Backyard Braai, a tshisanyama in Joza, offered to help with the preparations and making sure that everything is a success.

My church, River of Life Church and a running club called Sole Sisters donated all the paint, while other people donated money and painting equipment.

If it was not for Covid-19, I would’ve involved the learners at Samuel Ntsiko in the painting. A special thank you to the principal, Mrs Nombulelo Koliti, who welcomed us and the idea warmly.

I want to specifically, and on a very special note, thank the people who donated towards this because it would not have happened had it not been for them. There are so many of them – I pray blessings on them. I still have plenty of paint and funds left and I would like to paint a classroom at another school. Please email me (Nontokozo Mchunu) via community@grocotts.co.za – they will pass your details on to me.