K9 Sammy – from happiness to heartbreak… to joy 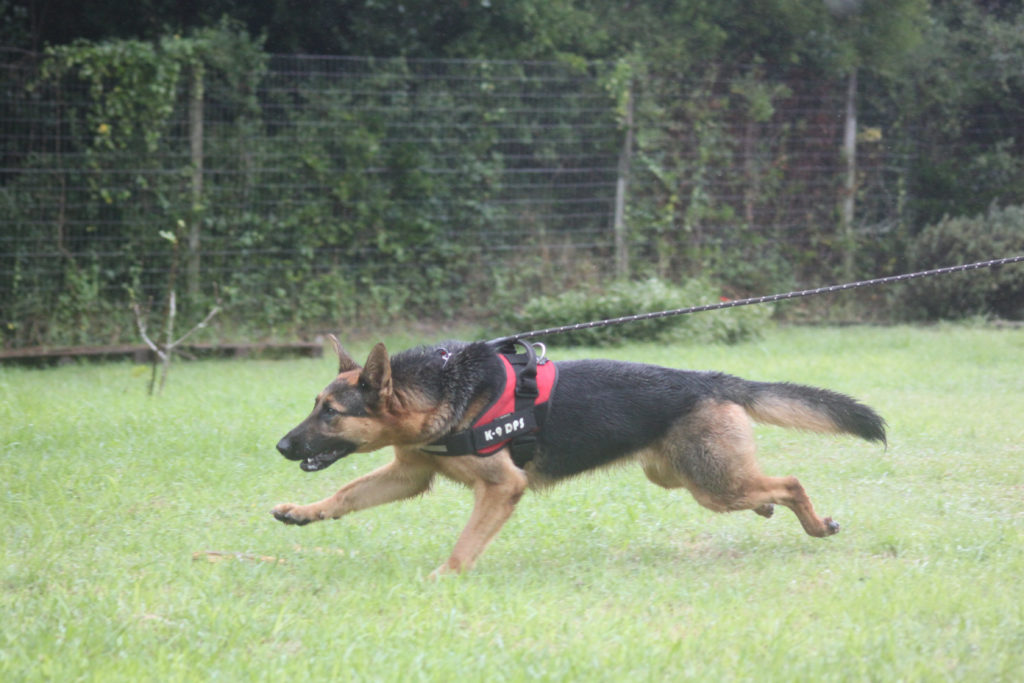 We published the heart-warming story of anti-poaching dog Sammy’s retirement in GMDirect, the weekly PDF edition. As we were about to publish it online a few days later, the news came that Sammy had been lost. Read here first about Sammy’s well earned rest at her new home, the heartbreak of losing her… and the joy of finding her again. All stories and photos courtesy Amakhala Game Reserve and the Chipembere Rhino Foundation.

After more than six years on the frontline of rhino conservation, K9 Sammy has retired. She is the Eastern Cape’s (EC) first Anti-Poaching Tracking and Apprehension Dog funded by an EC-based NGO and played a significant role in the local Anti-Poaching Units (APUs) and community patrols safeguarding our wildlife.

Sammy, a German shepherd, joined Amakhala Game Reserve’s APU in 2015 as a live wire 18-month-old. She was partnered up with wildlife protection K9 handler, Azola – a professionally trained and accredited K9 specialist. For a number of years, they shared a special bond forged during countless hours of training, patrolling, working and living together. Well-trained in human tracking and apprehension, bite-work and obedience, Sammy’s outstanding tracking and apprehension skills significantly enhanced the efforts of APUs across the Eastern Cape and was a catalyst for many other reserves in the region to appreciate the vital importance of having a well trained K9 component as part of an effective anti-poaching team.

Sammy’s deployment was a private initiative by the Chipembere Rhino Foundation (CRF), with funding from the local Mastertons Tea & Coffee Specialists raised through the sales of their specially-crafted Chipembere Coffee Blend that is ‘Roasted for a Cause’. For every 250 grams of Chipembere coffee purchased by retailers and coffee-loving rhino supporters, R5 is donated to the CRF’s conservation efforts.

“The unwavering support and assistance from donors such as Mastertons Coffee and Tea Specialists empower the APUs dedicated to protecting our rhinos,” comments Brent Cook, founder of CRF, a local registered non-profit organisation established to protect and preserve rhino in Southern Africa. “Our heartfelt thanks to Mastertons and their coffee-loving clientele for helping us over a number of years to continually protect our rhinos on the ground where it counts!”

“Sammy has been a valuable member of the anti-poaching team and is truly a special dog. We’re privileged to have been part of her journey in the field. She has certainly earned her retirement and the chance to take it easy! We wish her our very best and continue to do our part in the fight against rhino poaching,” says Ryler Masterton of Mastertons, which also continues to fund the newest addition to the Amakhala Game Reserve K9 APU: Nassua, a 2-year-old black German Shepherd.

Sammy has been adopted by the Howarth family, located not so far away from the Reserve. Azola still pops by to visit her. “I have no words at all – it’s like losing a child,” he says. “The bond that Sammy and I share, is a bond that will never end. But at the end of the day, I know that Sammy is going to be happy with her new life and enjoy every minute of retirement.”

Sammy now gets to be a regular dog and do regular dog things. “Sammy loves to ride on the back of the bakkie and running alongside the quad bike, but her favourite thing is to be indoors with us!” says Mandy Howarth about their newest family member.

“K9s like Sammy are making a huge impact in safeguarding Africa’s wildlife and as a working dog, even in retirement, she will always be heralded as a dedicated conservation warrior” concludes Cook. “We wish Sammy and her new family all the best – it is a well-deserved retirement for a brilliant K9, whose work protecting our wildlife will never be forgotten.”