Munis need a reset – but not at the expense of lives: Moseneke 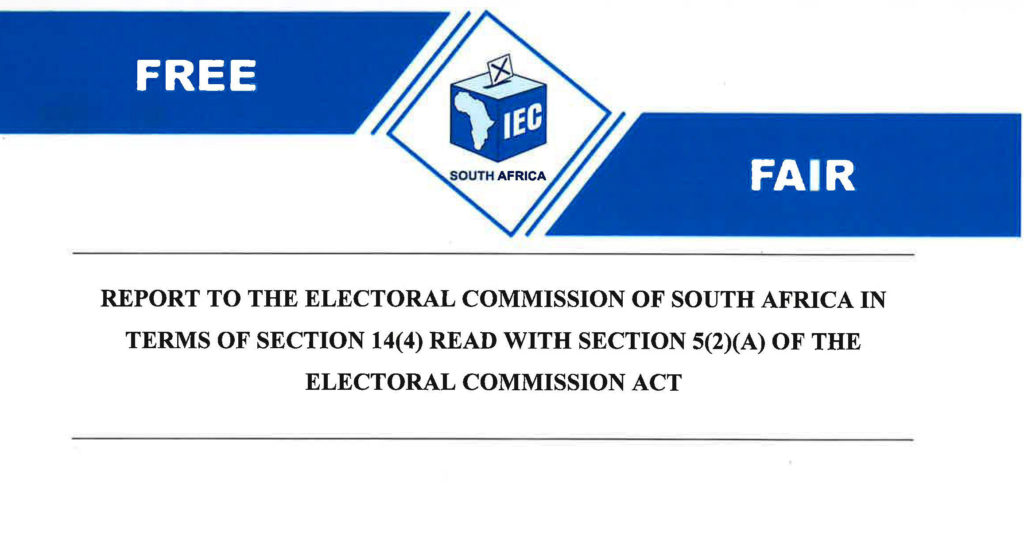 The Electoral Commission says it will provide an update on its consideration of the report of the Inquiry into Ensuring Free and Fair Elections during Covid-19 compiled by Justice Dikgang Moseneke. The media briefing is on Friday 23 July 2021 at 2pm.

Former Deputy Chief Justice Dikgang Moseneke has recommended that South Africa’s local government elections be postponed to February 2022 to decrease the risk of Covid-19 hospitalisation and death. The Electoral Commission says it will urgently study the report before making final decisions on its implications, and will make an announcement in the next few days.

The Commission in June 2021 appointed Moseneke to lead a process to evaluate the impact of Covid-19 on conditions conducive for the holding of free and fair elections on 27 October 2021. The Inquiry is in line with Section 14(4) of the Electoral Commission Act (51 of 1996). The report was presented to the Commission on 20 July 2021. The Moseneke Inquiry has significantly contributed to the national conversation about what constitutes freeness and fairness of elections, the Electoral Commission says.

The report acknowledges the many submissions to the Inquiry flagging the “governance devastation” in most South African municipalities.

“At a local government level, South Africa is due for a reset and, ordinarily, local government elections would be that reset button,” the report says. “We acknowledge that elections should be held soon. But it cannot be at any cost. On all expert medical evidence, many, many lives are likely to be lost unless we reach a certain level of community immunity.”

The inquiry consulted nine of South Africa’s leading medical experts and scientists in drawing the conclusion that the nearest point of safety will be February 2022, when there is likely to be a high level of community immunity.

However, said the Judge, “The postponement should be no longer than is strictly and reasonably necessary to save lives and limbs.” The report’s conclusions take into account both scientific data and prognoses about the pandemic, and the Constitution and other electoral law.

The scientists agreed that large group rallies and marches were super spreader events and avoiding them was non-negotiable.

The report acknowledges that many of the current municipal councillors should be given not one day more in office “if citizens are to be spared more bouts of unaccountable government, inept and dishonest financial accounting, and downright failure to observe the law that governs municipalities”.

Underscoring the need for an urgent local government “reset” was the Auditor-General’s finding that most municipalities are in a worse position than at the beginning of the current administration’s term in 2016-2017.

“The concern of the Commission is justified that under a state of national disaster, and with restrictions in place on the movement of persons and gatherings, political parties and independent candidates will not be able to freely participate in the forthcoming local government elections and voters will not have the opportunity to exercise rights that are essential to the conduct of free and fair elections,” the Inquiry report said. “The concern is heightened if South Africa is placed under an alert level that imposes more severe restrictions during the run up to, and at the time earmarked for, the local government elections.”

if the elections were to proceed as scheduled, most of the acts required to be performed in accordance with the draft timetable would not be reasonably possible, “starting with the face-to-face registration of voters who do not have access to electronic registration, the provisional and final certification of the voters’ roll, and the finalisation of the nomination processes for registered parties and independent candidates”.

This is because the subsisting lockdown restrictions will stand in the way of parties and independent candidates of accomplishing acts prescribed by the timetable and electoral laws.

“In our democratic order, elections must not only be regular, but they must also be free and fair,” Moseneke said. “Elections that are not free and fair, even if held regularly, are not democratic elections at all. They are a nullity. The two requirements must co-exist and be co-present at every election held under our jurisdiction.”

“We have readily conceded that deferring elections might be an unwelcome dent to our nation’s democratic resolve and psyche. And yet we hope we have shown that we are in exceptional circumstances that pose a real, direct and collective threat to our lives, bodily and psychological well-being and, might we add, to our livelihoods.”

Conducting elections in February-March 2022 would certainly save more lives than in October 2021, because of the higher levels of vaccination and related immunity. Even if community immunity, at 67 per cent of South Africa’s population, were not reached in February-March 2022, there would be far less risk of hospitalisation and death than there would be in October 2021.

An additional benefit to keeping the deferment to February 2022 was that it woukld allow the newly elected municipal councils to approve the annual budget for the new financial year.

The annual budgetary cycle would start before elections are held in February 2022; however, the newly elected municipal councils would be in place to consider the annual budget to be tabled in April 2022, and to approve it before the start of the new financial year on 1 July 2022.

In examining the report, the Electoral Commission said it would also consult with key stakeholders including political parties via the Political Party Liaison Committee system, as well as various state roleplayers.

“The Commission is cognizant of the very limited time available to make a final decision,” the Commission said.

Next weekend the Electoral Commission has scheduled a national voter registration weekend on 31 July and 1 August. Thereafter on 2 August, the Minister of Cooperative Government and Traditional Affairs Dr Nkosazana Dlamini-Zuma is expected to proclaim the elections which will trigger an 86-day election timetable.

With this in mind the Commission expected to make a final announcement on the way forward within the next few days.

“The Commission is extremely grateful to Justice Moseneke and his team who conducted this Inquiry under extremely tight timelines necessitated by the Constitutional requirement to hold Local Government Elections before 1 November 2021,” the Commission said. “Despite these pressures, in just 61 days Justice Moseneke and his team managed to conduct a thorough, comprehensive, transparent and highly inclusive investigation into whether free and fair elections can be conducted under the current COVID-19 conditions.

“What is clear is that the Moseneke Inquiry has significantly contributed to the national conversation about what constitutes freeness and fairness of elections. The Constitutional complexities involved – including balancing the legal and social aspects of our democracy – have clearly emerged during this process.”

The Electoral Commission says it will provide an update on its consideration of the report of the Inquiry into Ensuring Free and Fair Elections during Covid-19 compiled by Justice Dikgang Moseneke. The media briefing is on Friday 23 July 2021 at 2pm.

“The announcement follows the careful studying of the report and its recommendations, as well as extensive consultations with key stakeholders to arrive at the decision,” the COPmmission said in a statement. “The Electoral Commission will also share its proposed actions on some of the recommendations.”