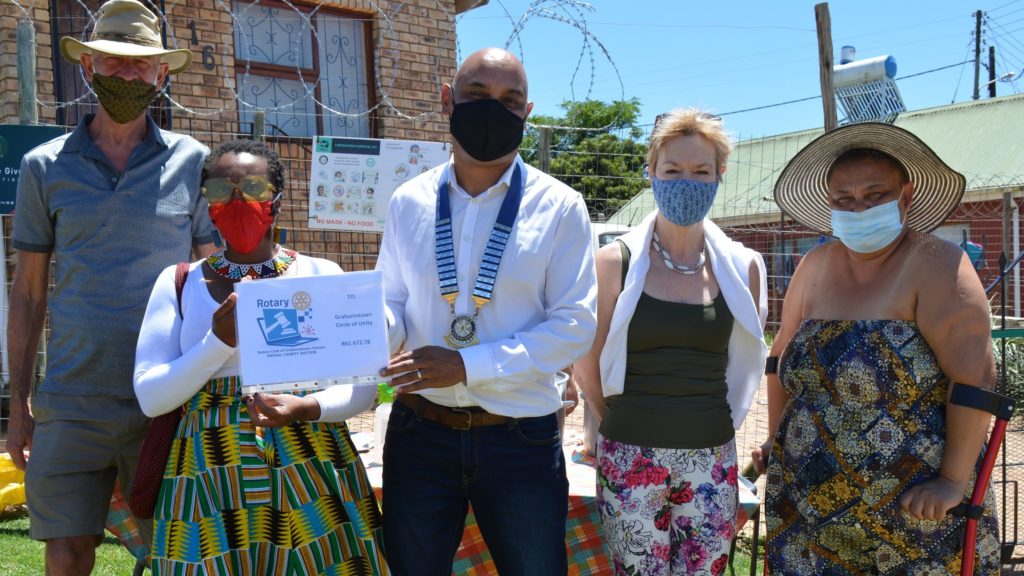 The Rotary Club of Grahamstown Sunset handed over in excess of R61 000 to the Makhanda Circle of Unity this week, to be used for the community kitchens that have been operating since the start of lockdown. The handover took place at the home of Dianne Oosthuizen at the top end of Currie Street, where a long queue of bemasked children waited patiently in the heat to collect their meal of rice, soya mince and carrots. It was humbling to see the gratitude and disciplined behaviour of the children, who promptly sat down on the lawn to eat, many bowing their heads in private thanksgiving for their meal.

Dianne, and her team of volunteers feed more than two hundred people twice a week, cooking the food in a makeshift kitchen in her garage. Feeding children and adults who have been the victims of job losses and income erosion since the lockdown began, Dianne says she started distributing soup to a few hungry families in April, and became aware of the need. She started cooking in her home, but the many people needing food forced her to expand into her garage. With the help of the Circle of Unity and other donors, she cooks in giant pots on gas cookers and has the support of many community members who come to assist with peeling vegetable, cooking and dishing up.

Dianne says, “I realised after sitting down to a Sunday roast lunch last year that I had so much, and many people had so little. And that inspired to me to start feeding the hungry people in my community.” This empathy and generosity has meant the difference between starvation and survival for many families.

Dianne’s kitchen is one of several operating around Grahamstown. Tim Bull from the Grahamstown Resident’s Association (GRA) estimates that the community kitchens have produced about 500 000 meals since April 2020. Funding has been received from various sources, and local resident and GRA member Sally Price-Smith has been championing the kitchens, even running the equivalent of the 56km Two Oceans Marathon in her garden in April for sponsorship. She raised over R50 000.

“But the need is never-ending,” says Price-Smith who spearheads fundraising for the kitchens with support from Tim Bull. Funds are handled by the Makhanda Circle of Unity and coordination is provided by Ntuthu Blow, Administrator of the Grahamstown Residents’ Association.

The Rotary Club of Grahamstown Sunset pledged the proceeds of both its annual Mountain Drive Half Marathon and the Charity Auction to the Circle of Unity community kitchen project.  Club President, Javier Martin said, “It was a learning curve for us to have virtual fundraisers, but we have managed to raise almost R75 000 using the web platform developed for us by new member Robyn Cooper. This meant that people from all over the country, even the world could participate. We are grateful to the donors of our auction items, and especially to our bidders, some of whom were from the UK. People bid generous amounts on the auction, and we were blown away by the support from local residents and faraway donors. Now that we’ve mastered the virtual format, we will be launching further fundraisers like this.”