Getting ahead with golf 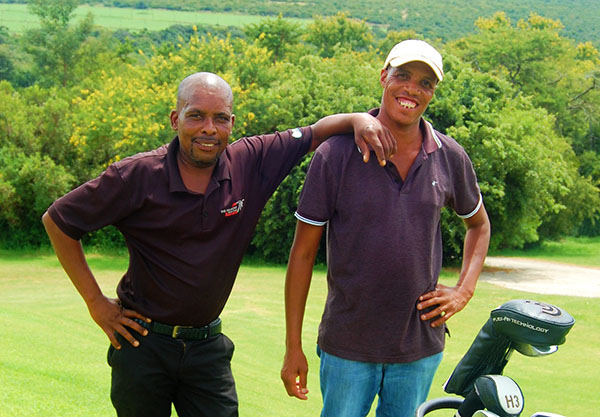 “My wish for the youth who sit idle at home or on the streets is to receive a chance like I did, to learn how to play golf and receive training from experienced golfers so they can change their lives for the better,” says Belmont Golf Club Caddie Master, Bongani Nkohla.

Makana Tourism’s first ever golf tournament, The Makana Sunshine 2 Day Golf Classic, is set to provide a launching pad for other aspirational caddies and golfers. It will be raising funds for the Belmont Caddie Academy and the Royal Port Alfred’s equivalent with the help of golf enthusiasts, who will be spending a weekend at Eastern Cape’s top golf destinations, The Belmont Golf Club and Royal Port Alfred Golf Club on 27 and 28 February 2021.

Nkohla, 42, was born in Port Alfred and boasts a golf handicap of 5 – achieved after several years of hard work and dedication to the sport. He immediately fell in love with the sport when he started working as a caddie at the Royal Port Alfred Golf Club.

“I have been playing golf for 16 years now after I was taught by another caddie at the Royal Port Alfred Golf Club.”

“It is unfortunate that most people in Grahamstown do not know much about golf,” he said.

“Golf is a great sport where you can challenge yourself. It is a sport that doesn’t bring arguments, it changes lives for the better and does not cause any trouble among players,” Nkohla said.

“It was not easy to learn this sport and took many years of hard work to get me to where I am today, but fortunately had mentors to show me the way.”

Nkohla would like for other young people in Makhanda to receive the same life-changing opportunities that came for him through playing golf.

His colleague Sivuyile Makile, 40, who is from Makhanda said, “Grahamstown only has 10 caddies. So you can only imagine how rare this sport is among Grahamstown residents, especially in the black community.

“But since I am coming from that community, my wish is to see youth spend their time wisely during the school holidays and get involved in golf,” said Makile. “The nice thing about caddying is that you get to meet new and different people from around the world.”

Makile said he is the golfers’ first impression of the Belmont Golf Course and Makhanda, as he spends a lot of time with the golfers and answers their questions about the Club and his home town.

Makile has a golf handicap of 14 and started playing the game in 1998 at The Belmont Golf Club’s previous golf course on Cradock Road in Makhanda. He  was taught by the then Golf Club Manager.

“Before I became a caddie, I used to work at the driving range where it was my job to collect the golf balls. My manager then asked me if I had an interest in playing golf and I said yes.

“I was scared at the beginning that people would make fun of my shots,” said Makile.

“I would like to encourage the youth to take up the game of golf and improve themselves. Golf is one sport that requires honesty because you can’t cheat or lie. It is just you and the ball,” he said.

The Belmont Golf Club Captain, Warren Henry said their golf club was privileged to be one of the hosts for the golf tournament. “We are very pleased to showcase our course to the rest of the Eastern Cape community,” he said.

Henry said that The Belmont Caddie Academy is an initiative put forward in 2015 to develop caddies’ playing skills and give them potential career prospects. “We would like to have as many caddies trained as we can.” Henry said he was very proud of Nkohla and Makile, who will soon be teeing off at the Fish River Sun Golf Course in Port Alfred to challenge their skills at the  exclusive golf tournament. He wished for more good stories to come out the Academy, but said consistent funding was a crucial aspect. “We need ongoing funds to be able to provide professionals to come in and train them,” Henry said.

Makana Tourism director, Sue Waugh, is excited for yet another opportunity to give back to the Makana community. “Caddying is becoming a scarce skill. So having the chance to groom new caddies who will eventually be able to use this skills for their own self-development is truly inspiring.”

Waugh said businesses can also join this life-changing community drive by committing their staff to sign up for the Makana Sunshine 2 day Golf Classic or sponsor a hole or more on the golf course and give away promotional prizes for value-added marketing. For more information, interested businesses can simply visit the Makana Tourism website or email director@grahamstown.co.za.