Fury as residents face day 5 with no water 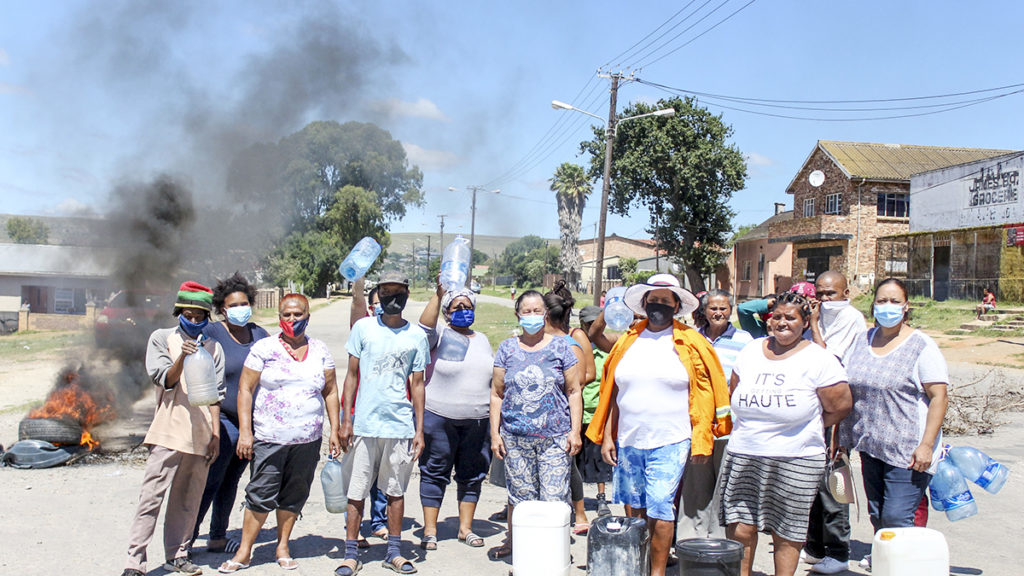 Scotts Farm residents , fed up with no water for five days, stage a protest in Albany Road. on 21 February 2021. Photo: Sue Maclennan

Scotts Farm residents put up a barricade of burning tyres and branches at the north end of Albany Road on Monday 22 February, in frustration after five days without water in their taps. Their fury was triggered around 10am when a municipal water truck arrived to dispense water, but left before everyone in the queue had a chance to fill their buckets and bottles.

“There were less than 10 people here,” said Scotts Farm resident Chrissie du Plessis. Only about half the people had got their water and already the truck was leaving,” she said.

“They told us there was a water protest up in Hooggenoeg so they must go and take water there.

Another resident, Lorraine Covis said, “This is not fair. We must now go and buy water with our pensions.”

All the shops in the area had run out of water by Friday afternoon.

“We hired a taxi to go and buy water from town,” Covis said.”But when we got there, Pick n Pay and SPAR both didn’t have any water either.

“There’s no money in this community,” Du Plessis  said. “People have been retrenched from their jobs because of Covid. “And now this.

In the bigger picture, this was a relatively small problem, Du Plessis said.

“But these small problems remind us of the bigger problems.”

The previous day, residents at the opposite end of Scotts Farm broke into Kuyasa Special School and took water from a tank on the school’s grounds.

“We want to see the Mayor,” residents said.

“We have ordered a water tanker and we won’t go until it arrives,” the residents were assured.

In addition, they were promised  a 500-litre water tank, where residents could come and fill up with water in their area. This would be delivered on Tuesday 23 February, Mpahlwa told them.

A community meeting together with the area’s ward committee, would take place on Wednesday, the Mayor said.

Meanwhile, up the road in Hooggenoeg, residents waited in groups with buckets and bottles for the water truck.

“The truck last came on Friday,” one residents said. “We haven’t had anything since then.”

Residents were sitting and waiting in small groups, but the signs of an earlier protest below the electricity department remained, with stones and other objects used to barricade the road still lying next to the road.