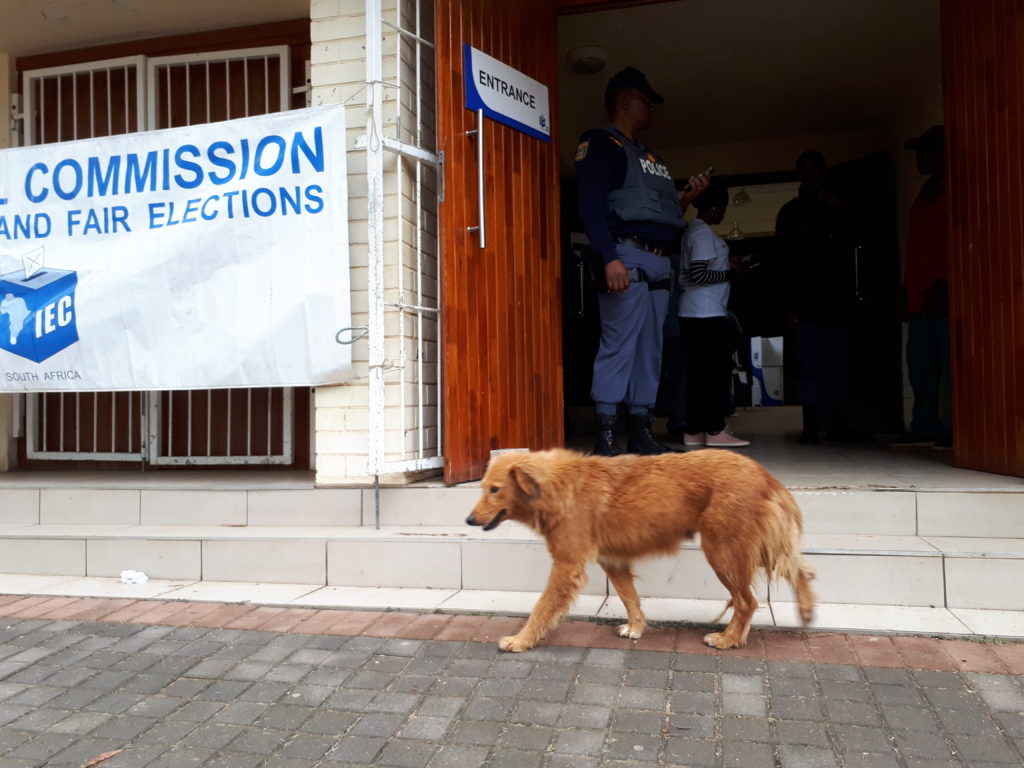 A dog ambles past the entrance to Alicedale town hall on election day in 2019. The IEC says it will not be the watchdog of political parties when the political funding act somes into effect on 1 April. Photo (May 2019): Sue Maclennan

Chair of the Electoral Commission (IEC), Glen Mashinini, has announced that his organisation will be ready to implement the Political Party Funding Act from 1 April 2021. At a media conference on Friday, he assured journalists that this is no April Fool’s joke.

The date was chosen because it coincides with the start of a new financial year for the public sector and political parties.

The purpose of the Act is to improve transparency around political party funding ahead of local government elections due to be held between August and November this year. Greater transparency is deemed necessary because according to the old maxim, he or she, who pays the piper calls the tune.

Mashinini said, “Transparency and information is a foundation for free and fair elections and this Act will go a long way in providing information to voters, the media, civil society and all other stakeholders on how political parties are privately funded”.

It is therefore clear that the objectives of the Act is to enhance democracy by letting the public know who is calling the shots in the political parties. Voters want to know which company is sponsoring that party’s conference; who is paying for the upkeep of their headquarters and how can a party leader afford such expensive Italian shoes?

Who is calling the tune?

The new Funding Act is a good thing. It must be because South African political parties have always touted their commitment to transparency and denounced the other parties for their lack of the same.

Transparency and democracy go hand in glove with each other. You can’t have one without the other and our politicians claim to be passionate about democracy.

If all parties are so enthusiastic about transparency why has it taken so long to draft and eventually implement the Political Party Funding Act?

Deep concerns about the funding of political parties predate the advent of democracy in 1994. It was however, only in 2004 that the Institute for Democracy in South Africa (IDASA) launched a court case attempting to force the four main political parties at that time to disclose the sources of their funding.

The parties countered with concerns about losing donors if their contributions were revealed to the public. After much legal argument, the High Court decided that political parties were private entities and therefore not required to disclose information about their donors.

Nevertheless, in private conversations, the DA said they were willing to reveal the sources of their funding if the other parties did the same.

The ANC called for greater transparency in party funding in resolutions at both the 2007 and 2012 elective conferences.

In spite of broad agreement on the need for such legislation, it was only promulgated in 2018 and then the professionals took another two years to draw up appropriate regulations for the implementation of the Act.

Having good legislation is wonderful, but it will not change anything if it is not implemented properly and in good faith. South Africa has many excellent Acts and an outstanding Constitution, but the laws are often poorly adhered to and sometimes completely disregarded by those who are supposed to apply them.

Chief Electoral Officer of the IEC, Sy Mamobolo, appeared to be mindful that the implementation of the Act depended more on the integrity of stakeholders than anything else.

The regulated will be their own regulators.