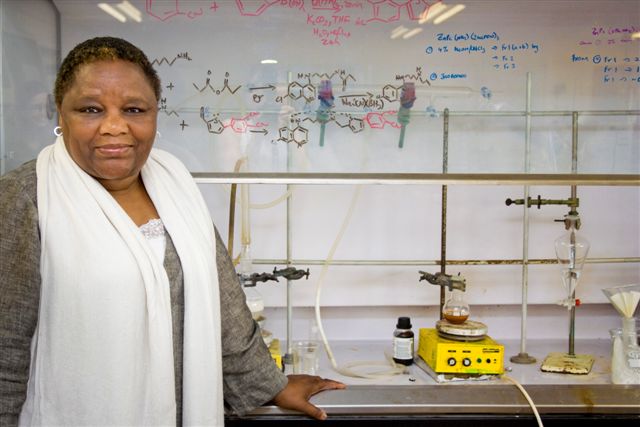 A young girl’s dream from the rural areas of Lesotho was simply to have shoes on her feet and food on the table. She spent most of her first eight years alternating between primary school and tending sheep, never imagining that one day she would be recognised by an international scientific organisation.

Rhodes University’s Director of the DST Institute for Nanotechnology Innovation, Distinguished Professor Tebello Nyokong, has been named an Honorary Fellow of the Royal Society of Chemistry.

Each year, the Board of Trustees of the Royal Society of Chemistry celebrates excellence in the chemical sciences by inviting a few eminent individuals to become an Honorary Fellow of the Royal Society of Chemistry (HonFRSC). Around 100 recipients have thus far been admitted in recognition of their unique achievements ranging from public engagement to distinction in research.

The President of the Royal Society of Chemistry, Tom Welton said: “I have the greatest pleasure in informing Professor Nyokong that she was nominated and the Board of Trustees has agreed to invite her to be admitted as an Honorary Fellow in recognition of her distinguished and groundbreaking contribution to the chemical sciences and as an influential leader. We will organise an appropriate occasion and location for her to receive this special award.”

Nyokong said her appointment to the Royal Society of Chemistry is testimony that poverty has no power to stop anyone from dreaming and realising their dreams.

“I am being recognised with the best of the best in chemistry and other fields, including people who are Nobel Prize winners. As an African woman working in the rural city of Makhanda, it makes me wonder how I got on the list.

“I like the fact that one of the attributes mentioned is being an influential leader. Many of us think, when they are in leadership positions, it automatically means they are influential people; however this is not the case.

“I also want to emphasise that one does not have to hold a big title to influence society. I appreciate that the Society recognises that I can influence the world even without the big title such as Dean of this and that,” she said.

Nyokong acknowledged the team she works with, saying she would not have been noticed without them.

The recognition showed that Africa “is not just about diseases, suffering, pain and murder” but produces excellence.

“This also recognises Rhodes University, because most people believe that everything good happens in the big cities. I am here to show them that you can be in the rural areas and make it. It shows why Rhodes University is among the best in the country in terms of research.

“I have always told my students that I am not going to settle for anything less than excellence. This shows that we have excellence in Africa, in the Eastern Cape, in Makhanda and most importantly at Rhodes University,” she added.

Nyokong encourages students from rural areas and from poor backgrounds to believe in themselves.

“Some of these students feel fearful of even coming to Rhodes University. They ask themselves questions ‘Will I be accepted? Will I make it?’

“Then when they get here, I send them overseas and they begin to see that there is a world of endless possibilities out there. Their perception about life changes,” Nyokong said.

“We need to change perception, give people hope and make them believe that they can make it,” she said.

Nyokong graduated in 1977 from the National University of Lesotho, having spent her spare time doing research on the role of chemistry in everyday African life, and obtained a Canadian International Development Agency Scholarship to undertake post-graduate studies. Four years later, she graduated with an MSc in Chemistry, and after further study received a PhD from the University of Western Ontario in 1987. She then applied for and was given a Fulbright fellowship for post-doctoral study at the University of Notre Dame in the United States.

On her return from abroad, Prof Nyokong taught briefly at the University of Lesotho before joining Rhodes University in 1992 as a Lecturer. Impressed by the quality of her work, the Foundation for Research Development (now the National Research Foundation – NRF) soon provided her with a rating which allowed her to set up a research laboratory at Rhodes University. It was the start of a rapid climb to the positions of Senior Lecturer, Associate Professor and fully-fledged Professor. She is currently engaged in ground-breaking research on a new cancer diagnosis and treatment methodology called photo-dynamic therapy which is intended as an alternative to chemotherapy.

Nyokong has successfully supervised more than 120 PhD and MSc students and published more than 820 manuscripts (including patents, a book and book chapters).  Her H index (an index to quantify an individual’s scientific research output) is 65 (ISI). She has received many awards and recognitions for her research including: African Union Kwame Nkrumah Scientific Award; Unesco Medal for Contribution to Development of Nanoscience and Nanotechnologies; invitation to be a part of United Nations Secretary General’s High Level Panel (HLP) of Experts on Technology Bank and Science Technology and Innovation supporting Mechanism dedicated to the least developed countries; The World Academy of the Science (TWAS) for outstanding contributions to science and technology; South African Chemical Institute (SACI) Gold Medal; Top 10 Most Influential Women in Science and Technology in Africa; Order of Mapungubwe: Bronze by the then State President of South Africa Mr Thabo Mbeki; winner of  SABC2/Shoprite-Checkers Woman of the year 2004 in Science and Technology.

Having received all these awards, the 69-year-old Professor said before she can even think of retirement: she would like to develop drugs that can help people in Africa. “I want Africans to see that you can be poor but you can influence the world. That is my mission,” she said.

“We are incredibly proud of her contribution to the research output of the University and all her achievements. She has very few equals in her area of specialty. She is making a huge contribution to our country and to the whole world and as the University we are delighted to have academics of her caliber teaching our students, supervising our postgraduate students and contributing to knowledge,” he said.