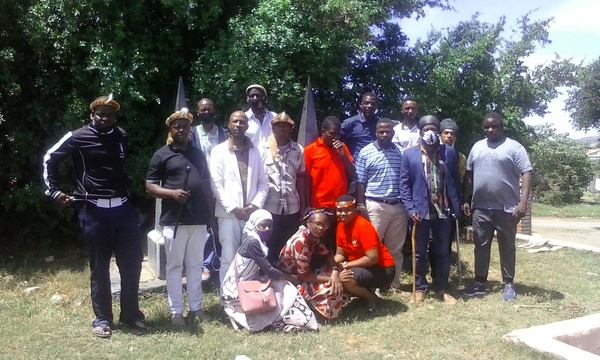 The King Lobengula Foundation had an opportunity to welcome an entourage from Uqweqwe luka Mthwakazi, a Non-Profit Organisation which was founded in 2019 in Johannesburg with the aim to assist to work for the restoration of Mthwakazi. The group wants to align their objectives with those of the King Lobengula Foundation, also campaigning for the unity of African people.

Mthwa is an Nguni name for Bushman. When Mzilikazi founded the Ndebele Nation, some Bushmen people came also looking for shelter under his newly founded kingdom. The name given to this unity was AbaThwakazi (plural) and singular, uMthwakazi. These people spoke a language the Nguni did not know. The name actually means “we are in the land of the Bushmen”.

The Uqweqwe luka Mthwakazi had an opportunity to experience one of the Heritage Tour Routes in the Sarah Baartman District, the “The Long Walk to Discovery” which takes Tourists to experiences such as the Princess  Zila Lobengula Cultural Village in Fingo Village; the Lobengula Heritage Gravesite, where A.N.L. Mzilikazi is laid to rest next to his son Prince Njube R. Lobengula and his lovely wife Nombina Rosamund Lobengula; it then continues to Queen Victoria Cemetery, where some of the Veteran Soldiers of World War 2 are buried and forgotten to this day. The tour finishes at Mount Zion (Makana’s Kop), in Makhanda.

The visitors were taken to see the gravesite of Alban Njube kaLobengula kaMzilikazi at Kwa-Ndancama (“Place of lost hope”). After that they met the descendants of Prince Njube Rhodes Lobengula at the Princess Zila Lobengula Museum (see picture).

In the 1.5km Long Hidden Walk to Discovery, tourists get the chance to meet the locals and interact with other cultures. Organisations such as the King Lobengula Foundation and Uqweqwe luka Mzilikazi should work together and strive for the restoration of African pride.