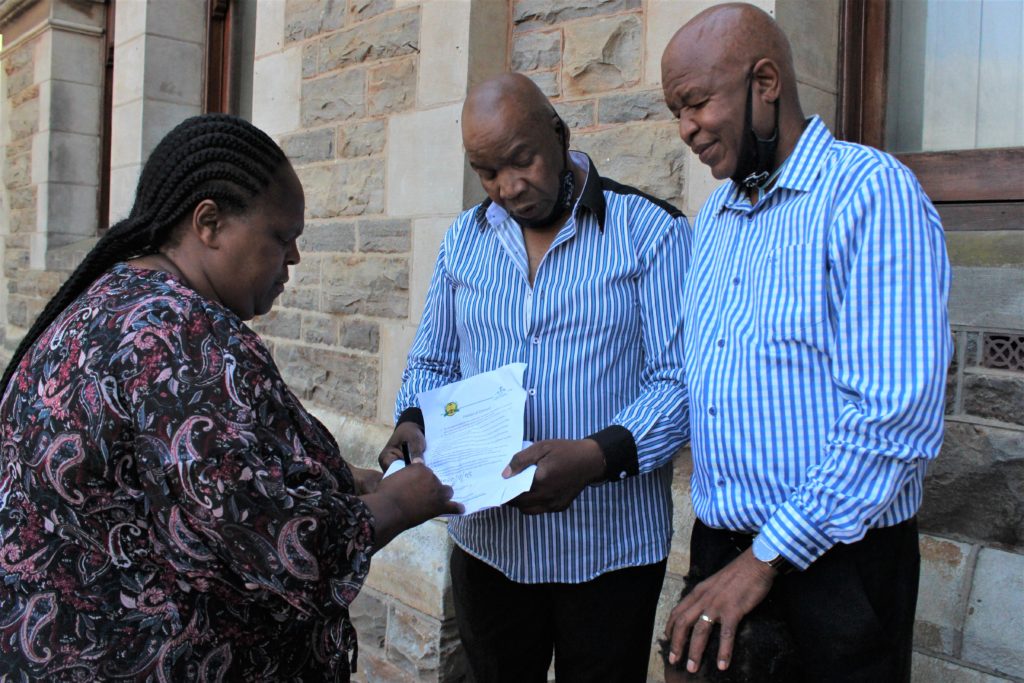 Noluthando Santi, personal assistant in the Speaker's office, signs receipt of a petition from the Makhanda Legends, handed over by Sky Albany (centre) and Archbishop Nkosinathi Ngesi on Thursday 8 October. Photo: Sue Maclennan

Members of the Makhanda Legends group, Sky Albany and Archbishop Nkosinathi Ngesi, on Thursday 8 October handed over a petition to the Office of the Speaker at Makana Municipality.

A week ago the group, in alliance with the South African Council of Churches anti-corruption campaign, held a silent protest outside the City Hall. Among the concerns they expressed was the unresolved issue of outgoing Corporate services Director Nomthandazo Mazwayi’s allegedly irregular salary hike. Mazwayi resigned and this week starts a new job as municipal manager at Sakhisizwe Municipality.

This week, Albany and Ngesi, who is the Archbishop of the Ethiopian Episcopal Church, handed over a list of demands.

“We the Makhanda Legends born and bred in this Makana Municipality are concerned about [its]continued maladministration…” they write.

“This municipality used to be the best managed… municipality in the Eastern Cape… We have a moral and ethical responsibilitiy to hold those in office accountable,” say the grouping of anti-apartheid Struggle veterans and church leaders “born and bred” in the town.

Their demands include that Mazwayi repay the amount by which she was allegedly overpaid; that managers stop the abuse of municipal vehicles after hours and on weekends; that companies appointed for Covid-19 related services be published and that there be transparency in the recruitment and selection of staff.

The list of demands was signed for by Speaker Yandiswa Vara’s personal assistant Noluthando Santi.