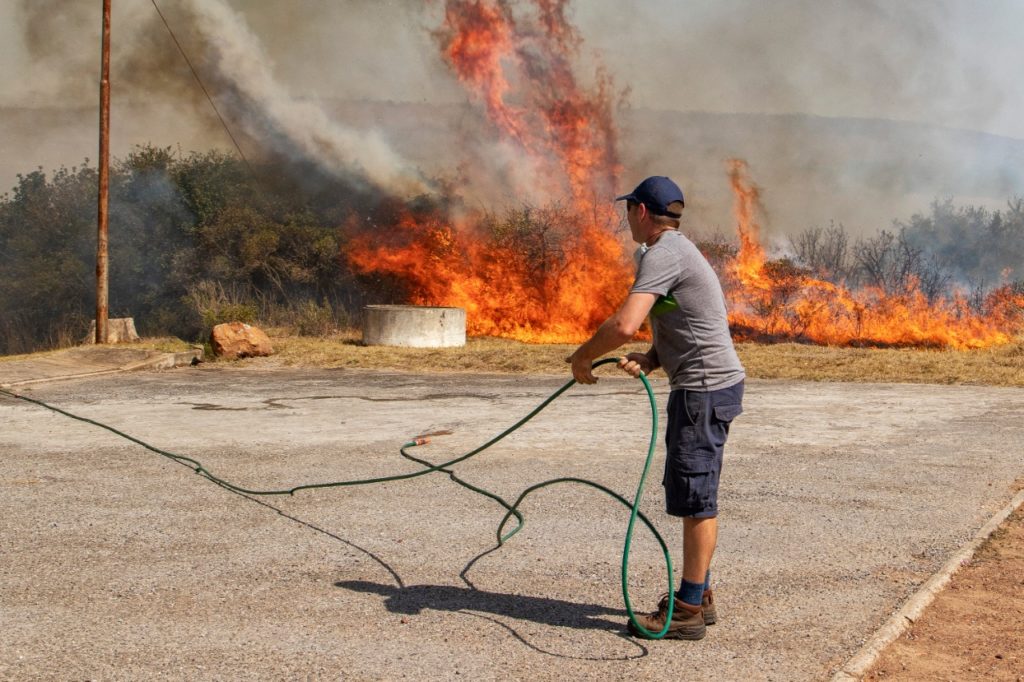 A resident who battled to defend his home from a veld fire last Saturday warns that poor road access, failure to maintain  firebreaks on municipal land and low water pressure make a dangerous combination for residents on the edge of the municipal commonage.

Jay Kruuse was speaking to Grocott’s Mail after a fire came dangerously close to houses in Hillsview Road on Saturday 26 September, forcing residents to fight flames at their back fences. And it was Déjà vu for PJ Olivier, as the fire was stopped short of the school’s garages, where the school bus was parked. The school’s computer lab was razed in a fire in 2012.

Just two days earlier, on 24 September, Hill 60 residents had fought a fire that swept across the Industrial Area towards the suburb.

Manager of Fire Services in Makhanda, William Welkom, said around midday on Saturday 26 September, a fire spread rapidly across the veld near PJ Olivier. It was eventually contained near the N2 bypass.

A standby crew was called in as eight fire fighters and six vehicles battled a large area of burning bush and grass, fanned by a strong wind. Welkom said the cause of the fire was unknown.

Kruuse, supported by his neighbours, family, staff and tenant fought the fire directly, from below PJ Olivier.

He says a maintained firebreak would make the area much safer for residents and easier for the Fire Services to protect.

“Whenever a fire breaks out behind Hillsview, my immediate frustration is that there is not a firebreak that is maintained by the municipality,” Kruuse said. There cannot be an expectation that commonage needs to be maintained by residents. This is the third fire that’s occurred since 2012. Had it not been for the fire-break that I have maintained behind my property, the fires would’ve threatened both the houses and residents.”

Accessing the veld between PJ Olivier and the houses in a vehicle is difficult. Previously, Kruuse said, access from a road leading off the N2 side was easy; however, an Armco barrier had since been installed, closing off the entrance.

Grey Dam was now the only entry point to the area. However, the road was only suitable for 4-wheel drive vehicles, and inaccessible for fire trucks.

Another access point, off Robinson Street, has been compromised by a missing inspection cover. The road is also a service road to access power lines.

“Maintenance of the road would better enable access to the Eskom electrical substation,” Kruuse said.

The 2015 fire in which houses at Stones Hill had burnt down had been caused by an electrical fault at the substation, Kruuse said.

“We have a substation that’s vulnerable, an area that cannot be adequately accessed by the municipality and the firebreak isn’t maintained. There is no fire-break, other than those that are maintained by residents. It’s a recurrent concern.”

“What will it take before the municipality responds meaningfully?”

The large fire-trucks cannot access the area via residential properties because the driveways are narrow, steep, and not designed to take a heavy-duty vehicle.

“It’s an all-round difficult situation, and when the municipal water supply is low, then you’re further frustrated by the inability to use water to fight the fire, to protect your home,” Kruuse said.

“Residents have to throw money at the problem, to invest in pumps and infrastructure to house water.”

Even with scarce resources, Kruuse said, “If you introduce fire-breaks, and maintain them, then your ability to fight fires is greatly enhanced.”

Two days earlier, residents in Hill 60 had a similar experience as a fire on the western commonage tore across the back of the Industrial Area towards their homes. They struggled to keep flames at bay with hose pipes – an almost hopeless situation as low water pressure resulted in a trickle.

“We’ve had big fires last season,” he said. “Fortunately, schools, businesses, neighbouring municipalities and district municipalities assisted all they could with vehicles and equipment to put that fire down.”

In July 2018, a fire that began west of the airfield spread rapidly across the veld, threatening homes west of Constitution Street and approaching Somerset Place retirement home and Settlers Hospital. A fire in December 2018 threatened homes above Grey Street. And in July 2019, a fire approached Rhodes University residences before spreading westwards towards Hill 60.

Welkom reminded the community that Makhanda is in its fire season when the risk of fires is higher because of little rain and dry vegetation.

“I would like to advise the community not to start unnecessary fires, as it could lead to loss of life and property. Any fires noticed are to be reported immediately to the Fire Department through 046 622 4444 or 080 111 4444,” Welkom said.

IN THE LINE OF FIRE

PJ Olivier Hostel Superintendent Ronelle Eygelaar got a call around midday on Saturday to say there was a fire behind the hostel.

“By the time I arrived at the rugby field, Wade Mayes was connecting the irrigation system’s garden hoses,” she said.

“The strong wind was pushing the fire closer and closer to the school grounds,” Ronelle said. “Unfortunately, a part of our fence needs to be replaced. Our biggest concern was that the fire would reach the carport where our bus was parked. It was a close call.” She says the fire brigade helped to control the fire, coming again on Sunday to check on smoldering tree stumps.

Amanda Hlobo was home at her student digs in Hillsview Road. “We were chilling inside the house when suddenly we saw smoke. We got out of the house to see what was happening.”

“It was too dark to see, but you could tell that there was a fire. So we walked up the property to check it out and we saw a big fire. A scary fire, I’m telling you.”

She and her housemates took their clothes and most important possessions, deposited them near the swimming pool, and evacuated to the bottom of the road, calling for help from a neighbor.

“It was too scary,” Hlobo said. “I’ve never seen anything like that before. I don’t know how it was for other people, but I was scared.” She says other residents helped keep the fire back.

Sunnyside resident Charlotte Jefferay drove up to see what was happening.

“People said flames were behind the houses.”

She and a friend returned with containers of water and went on to the hillside to douse hot spots.

On the road below was Hi-Tec Security, Shmart Security, a Guardmed ambulance and people with Jojo tanks and pumps.

“It was hard to know where the fire brigade was because every time I asked they said, ‘they’re already there’,” Jeffery said. “But it was difficult to ask anybody because they were so busy.”

Photos from the commonage fires

Images below are from a resident fighting the fire at Hill 60 on 24 September, captured by Simon Pamphilon. The Makana Firefighter pictured as well as the burning landscape photograph were taken in the Hillsview road area on Sunday 27 September, by Veer Bills. 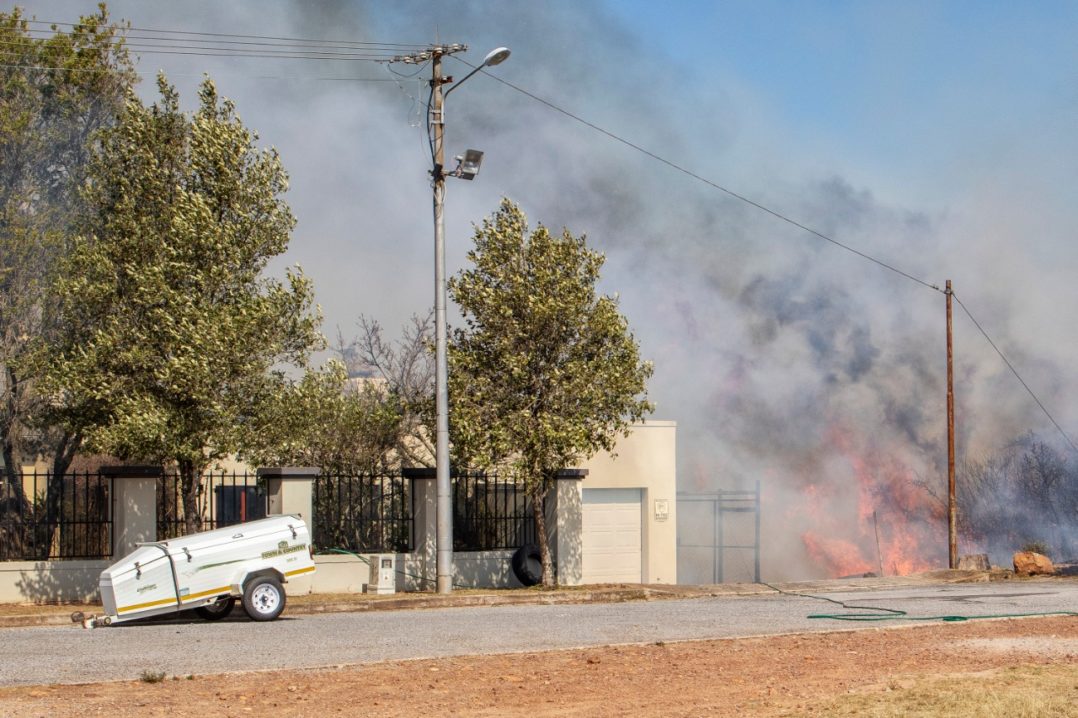 A Hill 60 resident battles flames behind his property during a fire on the western commonage on Thursday 24 September.
Photo: Simon Pamphilon 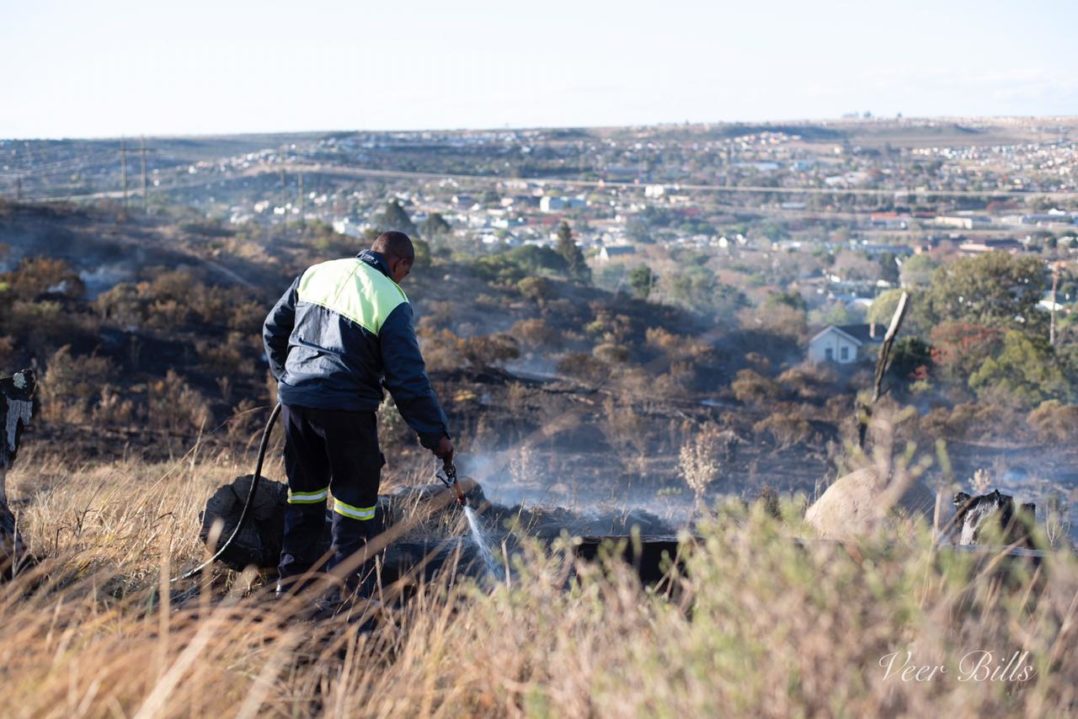 A Makana Fire Fighter extinguishes flames during a veld fire on the southern commonage on Sunday 27 September.
Photo: Veer Bills 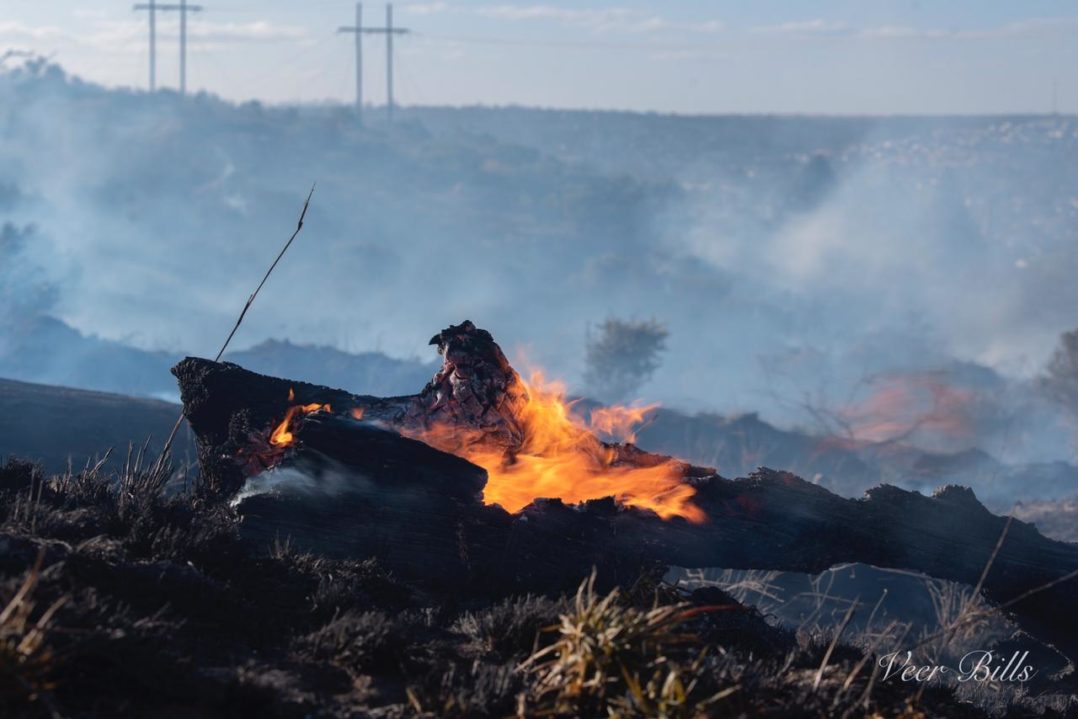 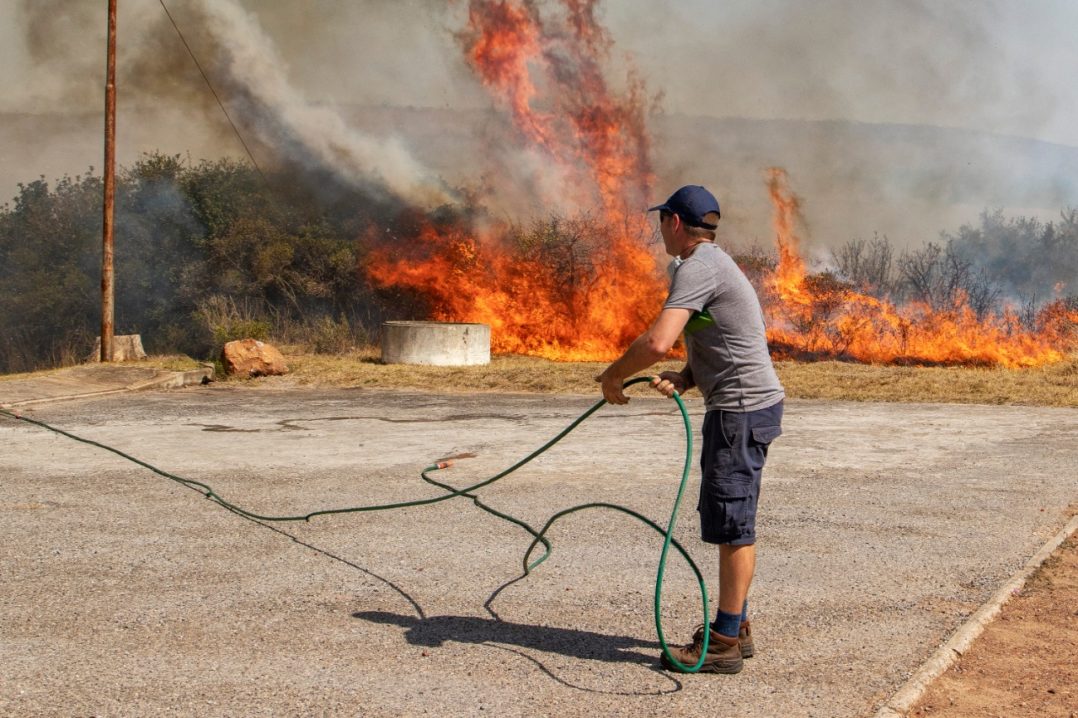 A Hill 60 resident battles flames behind his property during a fire on the western commonage on Thursday 24 September.
Photo: Simon Pamphilon
Previous ArticleBring on that bucketing rain, please
Next Article Rhodes student in semis for Miss Earth SA