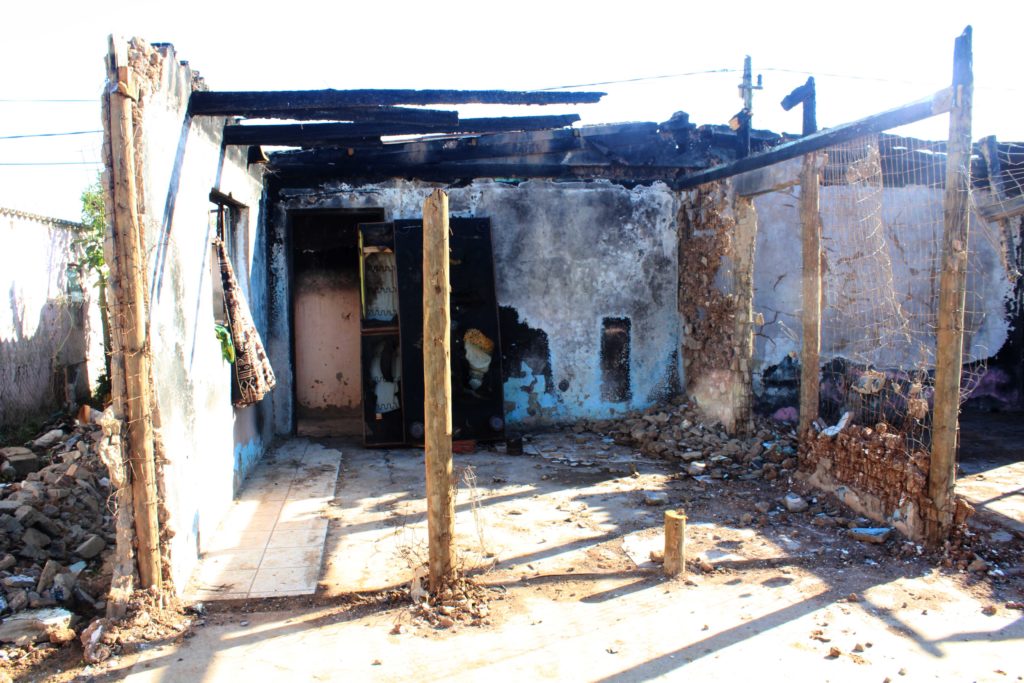 By Sinazo Alungile Novukela
Two fires have left the Mbunge family home in Joza Phumlani, Extension 3, in ruins. In 2016 half of it burnt down. In 2018, a second fire destroyed what remained of the structure. Melikhaya Mbunge was inside when it happened, and was lucky to survive – although scarred by burn wounds. The family says it was never established what caused the fires.

Melikhaya’s sister, Ntombizanele Mbunge, lost everything in the fire, including all her important documents. She reapplied for her children’s birth certificates and is still without an identity document.

She sought temporary shelter for herself and her three children with the father of her youngest child.

Of the structure, the old bathroom remains, roofless and with no windows. Melikhaya sleeps on a half-burnt mattress placed inside the old bathtub.

Ntombizanele says her brother refuses to leave what to him is home, even though family and neighbours have offered him a place to stay. Neighbours were especially concerned about his living conditions after he was discharged from hospital for burns. Concerned relative Nomalanga Mbungealong and neighbours, Sipho Kiti and Phindile Mthuthi, took it upon themselves to find help for the family. They sought support from the municipality via the ward councillor.

However, concerned that nothing was being done, Kiti and Mthuthi, took it upon themselves to follow up on the matter. They contacted Sarah Baartman Disaster Management and were referred to the relevant officer in Port Elizabeth. They were informed that Makana had approved temporary housing for the family.

All the necessary material for the temporary housing was provided and was delivered to the old Fire Station at Joza Extension 6.

Neighbours hired contactors to remove what remained of the front half of the house and place the rubble outside what was once the gate to the family home. But in order for the prefabricated temporary home to be put up, the site needs to be cleared completely. Neighbours believe this task should be undertaken by the municipality and said they’d asked the ward councillor to facilitate this.

In response to questions from Grocott’s Mail, Ward 5 councillor Luyanda Nase said he was the one who had arranged delivery of the prefab house. He said he was liaising with municipal officials about having it erected. However, he did not say when the site would be cleared in preparation.

The family relies on food parcels from Red Cross and the Department of Social Development. Neighbours say they help where and when they can. But they worry about the family in the cold and rain.