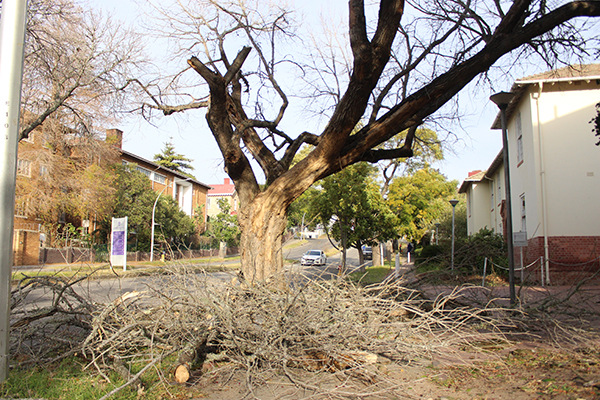 Winds of up to 75km/h combined with overgrown vegetation wreaked havoc with power lines on Thursday 9 July with five teams from Makana’s Electricity Department expecting to be out well into the night restoring power across Makhanda. The South African Weather Service predicts less destructive 27km/h north-westerly winds for Makhanda Friday, with gale-force winds moving into other parts of the Eastern Cape interior.

When Grocott’s Mail spoke to Makana Municipality’s electricity manager Mzomhle Radu after 7pm on Thursday night, he was still at work, co-ordinating five teams plus a cherrypicker and crane and didn’t expect to be home until well after midnight.

It was branches and sometimes entire trees that caused much of the day’s damage.

“It’s been a challenge today,” he said. “Conductors are down, poles are down and trees have fallen onto lines. The wind caused chaos, really.

“Branches blown by the wind bring conductors in contact with each other causing lines to short circuit,” Radu explained. This in turn triggered the fuses in substations and caused them to trip, leaving all the streets in that area in the dark.

In one street, a section of someone’s roof blew off on to the lines and short-circuited them.

Radu didn’t think he’d be leaving work before midnight, with more than 50 fuses needing replacement and trees being trimmed as the electricians reached each site. By 8.30pm Thursday night, several parts of town were still without power.

Sources say vegetation control (or tree-trimming) has not been carried out by the municipality for months.

Also on Thursday, a tall gum tree blew over on to the busy N2 opposite Waainek Water Treatment Work. Provincial Traffic officials regulated the traffic while Makana’s Parks Department and an Eskom team cut and removed it.

Another tree fell on to the R67 at Stones Hill and had to be removed, Traffic Chief Coenraad Hanekom reported.

The wind made for a worrying and destructive three days for residents on farms and smallholdings south-west of Makhanda, beyond Mountain Drive.

Makana Fire Chief William Welkom confirmed that a fire started between Stone Crescent Hotel on the N2 and Mountain Drive around 8km from Makhanda on Tuesday. Fanned by a strong wind it quickly progressed eastward along Featherstone Kloof.

By sunset on Wednesday, it was metres from Mountain Drive Manor and crews kept the blaze from the landmark building. The wind turned on Wednesday night, blowing the fire back up the valley.

Fire teams battled the fire throughout the night and by Thursday 11.30am, it was reported out, with a few stumps smouldering in the burnt area. Fire crews remained to monitor the area for any flare-ups.

Temperatures in Makhanda are predicted to drop to a chilly 2-15C on Saturday 11 July with snowfalls are expected over high lying areas of the province on Saturday. Sunday only two degrees warmer, from 2-18C.

“At the moment the chance of snowfall is on Saturday, accumulations are still on the light side,” Garth Sampson of SA Weather said.

Localised flooding, gale force winds and high sea conditions were some of the extreme winter weather phenomena expected from the well developed cold front moving across the interior. High seas with wave heights of 6 to 8 m were expected in Port Alfred on Friday,10 July into Saturday, 11 July 2020.