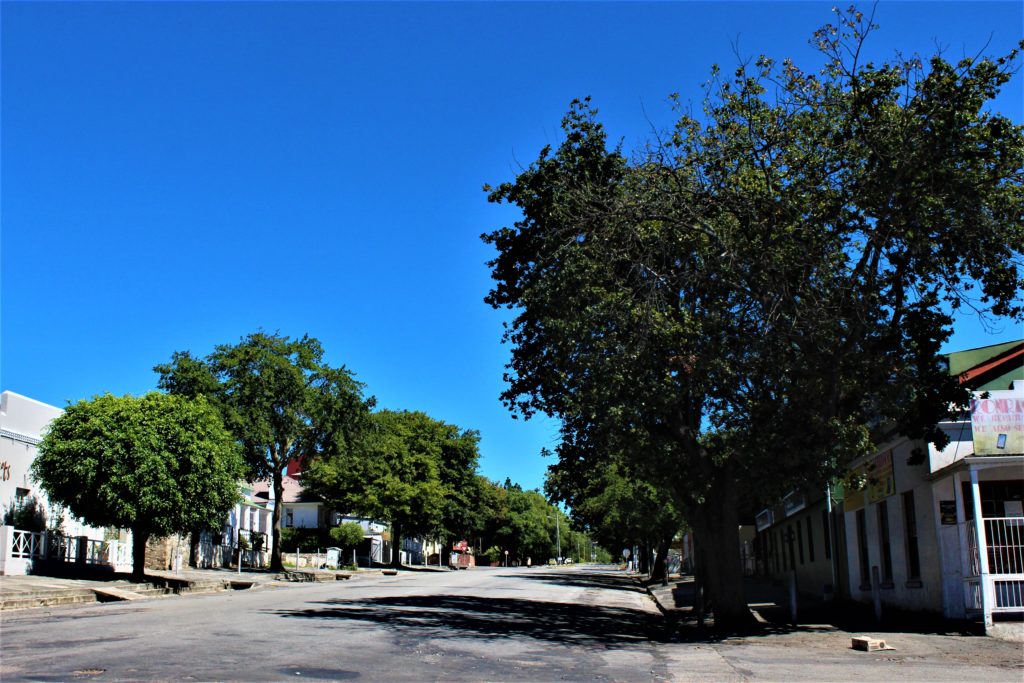 The New Street entertainment precinct, usually abuzz with students, completely empty on day one of the national lockdown, Friday 27 March. The future of food outlets remains uncertain, even as the lockdown levels lift. Photo: Sue Maclennan

The streets of Makhanda, usually alive with Rhodes students,  became especially quiet at the start of the national lockdown on 26 March as students in residences returned home. The university campus remained closed as the country moved down to lockdown level 4 and as local restaurants open for deliveries and take-aways, they are feeling keenly the students’ continued absence.

On 1 May, South Africa entered level 4 of the national lockdown, allowing fast-food restaurants and other dining establishments to open for deliveries and take-aways, among other liberties. After five weeks of the stringent level 5 regulations, many South Africans were excited at the prospect of ordering food from their favourite local restaurants. But the economic impact of the lockdown means many local restaurant owners  are having to carefully consider whether it’s worth their while.

The combination of the Covid-19 emergency laws prohibiting dining in and the sale of alcohol, as well as the absence of their substantial student clientele, are among the problems that local restaurant managers have to tackle.

One of the businesses that has remained closed under level 4 is the local Mugg & Bean at Pepper Grove Mall. Franchise owner Craig Foord said it would not have made financial sense for the establishment to reopen. Much like other restaurants, opening for business would create an obligation to pay overhead expenses that owners aren’t sure they can meet, consideringthe absence of their student regulars.

“It’s been a very tough time… there are people finding themselves in positions that they have never been in before,” said Foord.

Unfortunately, a lot of food also had to be discarded or given away. This is because Mugg & Bean has stringent food requirements. Much of their stock has short life cycles. Baked goods, for example, have a 24-hour shelf-life.

After the initial spike, the few food establishments that have opened their doors have reported a gradual decline in demand. The majority of owners have had to negotiate with their suppliers, creditors, and landlords in order to stay afloat.

Manager of Major Fraser’s Craft Bar and Eatery, Mongezi Plank, says because lockdown laws forbid the sale of alcohol,  approximately 30 litres of craft beer will have to be discarded due to its short shelf life.

“Craft beer and other alcoholic beverages make up about 60% of our monthly turnover,” Plank said. He estimates the establishment has achieved only 8% of it’s usual turnover and this is putting strain on their ability to pay their overheads.

Dudu Nyakotyo, who manages The Rat and Parrot, said  they’ve had to discard a large quantity of alcoholic beverages, baked goods and food products.

Sikhokhele Blom, who manages several fast-food franchises, has called the new circumstances “a completely different ball game”. The Debonair’s Pizza Manager said he has been able to open only two out of seven franchises.

The majority of restaurant employees are now at the mercy of the unemployment insurance fund (UIF) and the Covid-19 relief fund for income. Many are grateful to be earning a percentage of their salaries working in the kitchens or doing deliveries.

Though each of the managers face unique difficulties, they all agree that their future is dependent on what the government decides about lockdown restrictions.

Meanwhile, they ask the public for their support and patience.