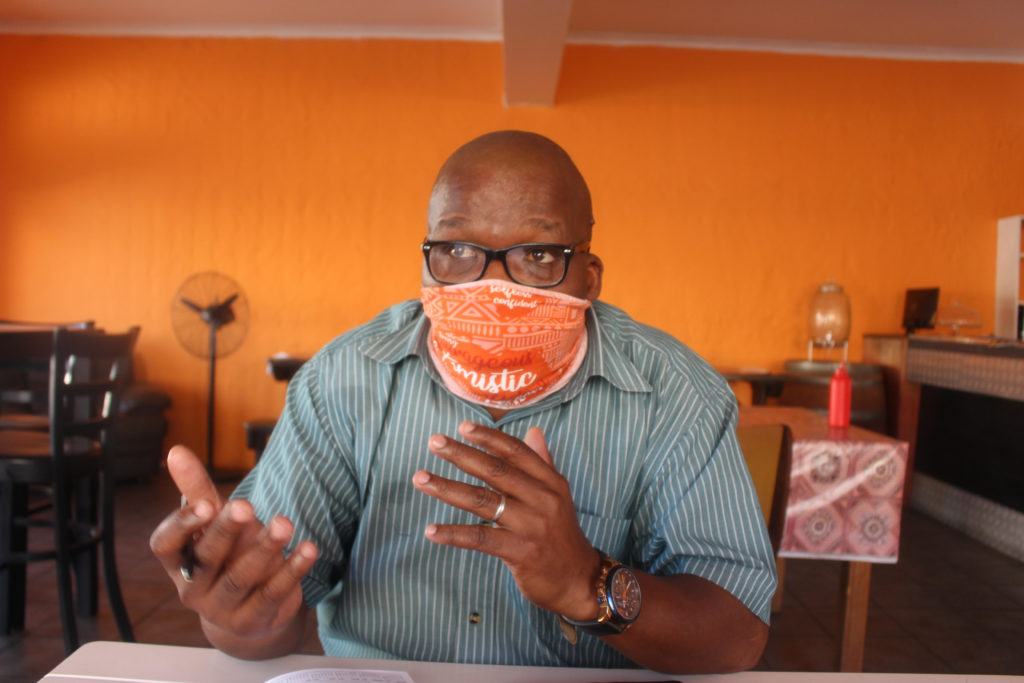 Simphiwe Xako, born and bred in Makhanda, is watching his dream of owning a thriving Tshisa Nyama restaurant going up in smoke due to the coronavirus lockdown. His need to leave a legacy for his children could be derailed. His restaurant is not the only one in our town as six other owners are feeling the pinch and possible closure for good.

“I can’t pay the rent, electricity, my suppliers and my staff. The economic impact has been extremely detrimental. It’s been very, very negative for businesses. I can’t believe I am facing this,” said Xako. He is grateful to his landlords, both at the restaurant and at his home.

“They have shown kindness towards me, even though they have come knocking on the door every now and then.”

Paying his children’s school fees depends on his making a profit and this worries him.

We are sitting in his little restaurant. It is quiet as we talk, a few passers by see his vehicle and pop their heads in to ask when he will be back in business. Politely, he points out that he can’t serve any hot meals during level 4 of lockdown. He could do deliveries, but can’t afford to as he has no money to pay suppliers, his staff and electricity.

Barely six weeks ago, Tshisa Nyama was abuzz with locals and students from Rhodes University and EastCape Midlands College.

“I wanted to provide people with a meal from home, from where they came from, especially the students who I know is probably tired of eating hostel food. And I can relate,” he said. “I am an alumnus from Rhodes University’s School of Journalism, where I graduated with a BJourn in 1996. I know the food we use to eat at campus and that’s why I started making and selling wholesome food for the student market today.”

Xako worked for the Daily Dispatch and later Business Day in Johannesburg, before setting off for Cape Town with one suitcase, eager to conquer the world.

“My wife and I returned from Cape Town after being there for 22 years, me as a young journalist working for the Business Day as a parliamentary reporter, to eventually being the communication manager of the Department of Correctional Services.”

“I employ four staff members. Every one of them had been without work for years. To see the pride when they received their wages was what made this worthwhile. They had dignity, they had pride and now it has been taken away. I feel for them, they are in the same boat as me, waiting patiently for some debt relief,” said Xako.

Xako has taken up the offer of government to provide a debt relief fund for small businesses. The fund came into effect on 24 March 2020. It aims to assist small businesses to pay off existing debts, payments of suppliers, operational costs, payment of labour and acquiring raw materials. To be eligible, all applicants have to show the impact, or potential impact, of Covid-19 on their business. The debt relief fund is administered by the Department of Small Business Development under the leadership of Minister Khumbudzo Ntshaveni. Small businesses must also be registered on the SMME portal www.smmesa.gov.za.

Xako has liaised with the local economic development office at Makana Municipality for assistance and they have helped him complete the online application.

“I have only received a reference number and was told that within 12 working days I should get an answer,” said a worried looking Xako. On day 12, Wednesday 6 May, he was still awaiting relief.

“To date, I don’t know of any restaurant that has received any assistance, despite numerous attempts. My view is that many won’t open again when the lockdown is over. Doing takeaways also isn’t always profitable or economical,” he warned.

Xako, an optimist, said he has faith in the system. “When we speak to each other, we always encourage one another. We know that any government process does take quite a long time. We are aware that most government departments are experiencing the same lockdown procedures which means not may staff are working and this could delay paying us. So, we are patient, and we hope our landlords continue to be patient.”