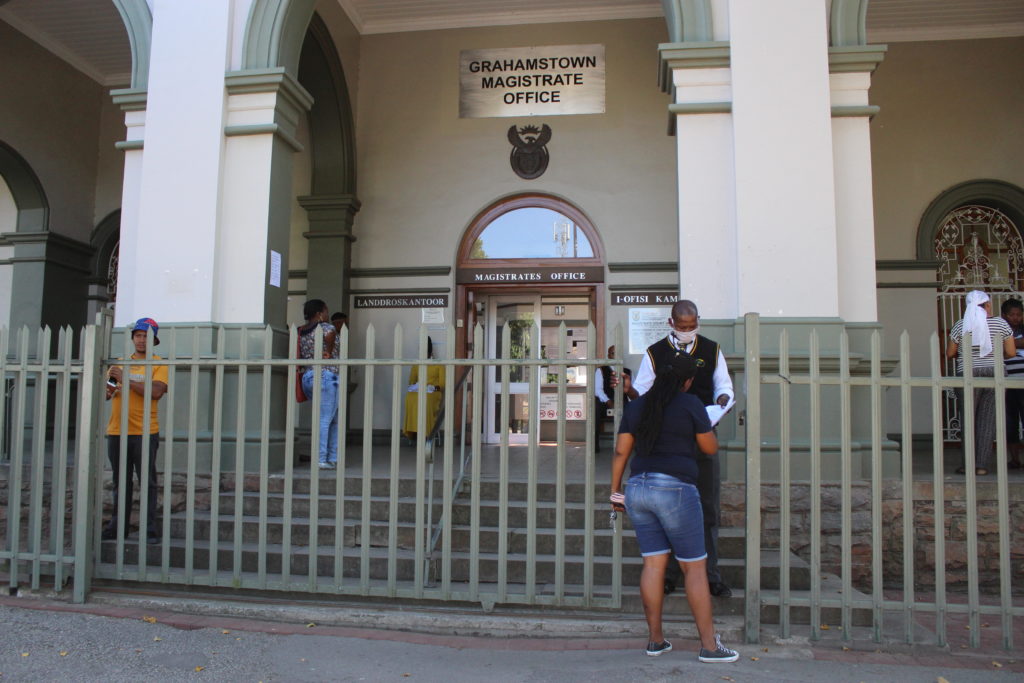 The Magistrate's Court in Makhanda. Dozens of mothers have waited as long as three months for child maintenance payments via government departments that are usually paid through the court. Photo: Sue Maclennan

A change-over in electronic payment systems is responsible for dozens  of Makhanda women not receiving maintenance payments through the Maintenance Court. The glitch, which an official says is a national problem, could be responsible for thousands of parents across the country failing to receive the money they need to care for their children.

Dozens of angry and frustrated women have contacted Grocott’s Mail in recent weeks, complaining that maintenance payments via the magistrate’s court in Makhanda have been delayed by up to three months.  All the women who spoke to Grocott’s Mail usually receive money deducted from the salaries of a parent (usually dads) employed by various government departments (e.g. Education, Defence, Health and Makana Municipality). They receive this via the Department of Justice’s third-party payment system.

But mothers waiting outside the Magistrate’s Court in Makhanda recently said they’d received nothing.

“My children are hungry,” said Nomakwezi Madikwa, furious. “How am I supposed to feed my family?”

Carmel Maartens said she’d been coming in every day for three days to try and get her children’s maintenance money, without success.

“They tell us there are systems problems, but we’re not used to system problems,” Maartens said.

Lona Mini said life under the Covid-19 lockdown was difficult enough, without there being this delay in payments.

“We don’t want to have to keep coming to town and standing in queues just to try and get our money,” Philippa Sauls said. “We know about Covid-19 and why we need to stay at home. Standing here in queues to sort out this problem is the last thing we need!”

Regional Court Head Dibuseng Mongoato said she had been made aware of the problem and had convened an urgent meeting with court managers.

“We are trying to resolve this problem,” she told Grocott’s Mail.

The Department of Justice was in the process of moving its third-party payments (payments made via the courts on behalf of individuals or organisations) from an old system to a new one.

According to Department of Justice documents, it receives and pays maintenance on behalf of maintenance obligors (employers and individuals) and beneficiaries, respectively.

“In this regard, it administrates these on behalf of the parties, which may include the employers of the defendants.”

In other words, they accept money received through it from defendants (or maintenance payers) and/or their employers by an order of the court and distribute it.

At the time of this report, the average turn-around time for receipts and payment was 3,6 days (including weekends and public holidays), according to the report.

During the 2016/17 financial year, the Department procured a new administrative solution, called MojaPay “to address the accounting and service delivery challenges of the legacy systems and inadequate management and administration of Third Party Funds”.

Mongoato said while most payments had been transferred to this nationwide system, there were a number still on the old system.

In addition, employers through whom maintenance payments were being made were now being asked to pay directly into the accounts of the end recipients, rather than via the courts.

It was in line with this new policy that the bank accounts for maintenance payments at al local courts had been closed.

“Some payments bounced back – others were locked in and we can’t access them,” Mongoato said. “So they were deposited into our accounts but we couldn’t pay out.”

Mongoato said the problem was emplyers’ reluctance to adopt the system of direct payment to end recipients.

“For example, in Makhanda, Makana Municipality used to make payments deducted from the salaries of 60 employees as a lump sum and that was manageable.

“But now that payments need to be made individually, like most government departments they are reluctant because of the extra admin involved.

“Others don’t trust the new system.”

In addition, not all files had been integrated into the new system.

Mongoato said they realised how serious this was for maintenance recipients.

“We have received various complaints and we are working very hard to resolve this,” Mongoato said.

One of the interim measures they would carry out was to open a new account in the new MojaPay system, “even if the account in the old system is not closed”.

“This is a national problem, not just in the Eastern Cape,” Mongoato said.