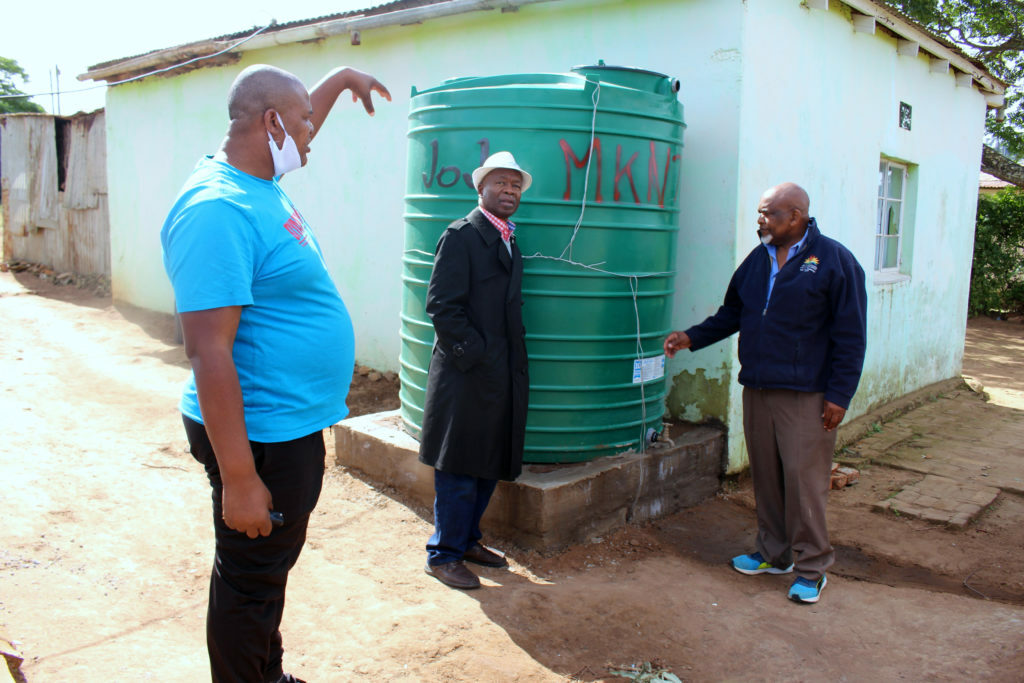 The sound of children playing and laughing as they drank water from the communal water tanks installed over the past two weeks greeted Makana Mayor Mzukisi Mpahlwa and councillors Luyanda Sakata and Ramie Xonxa when they inspected the tanks this week.

The councillors on Tuesday, 14 April 2020 visited several areas across Makhanda where some of the 144 water tanks were installed.

The tanks were donated by the national department of Water and Sanitation as part of the fight against the COVID-19 pandemic to assist communities that do not have water.

“The reason the government brings water to the people is to stop them from walking long distances during this lockdown,” Mpahlwa said. “l plead with everyone to stay at home all times.”

“Yesterday (Wednesday) we went back to them with a positive answer to their request.”

It is up to residents using the tanks to alert officials when they need topping up.

“Residents can alert their ward committee members or councilors [before]tanks are empty,” said municipal spokesperson Yoliswa Ramokolo. “As soon as they notice that they are almost empty they can report this to the councillors.

A water tanker will then be sent to replenish the tank..

The mayoral entourage found several water tanks neatly situated between houses and shacks. To ensure safekeeping, most of the water tanks were either situated in the middle of a group of houses, or within yards of members of the community. Most were set upon newly built brick and cement foundations, with wire wrapped around the tank to protect it from thieves. All the tanks were clearly marked as belonging to Makana Municipality. “The water tanks belong to the community and I expect the community to guard the tanks,” said the Mayor.

As the group left the Phola Park, they were met just below the graveyard by members of the community. They complained that Phola Park had been allocated too many tanks compared to their area. After a long discussion, the residents left.