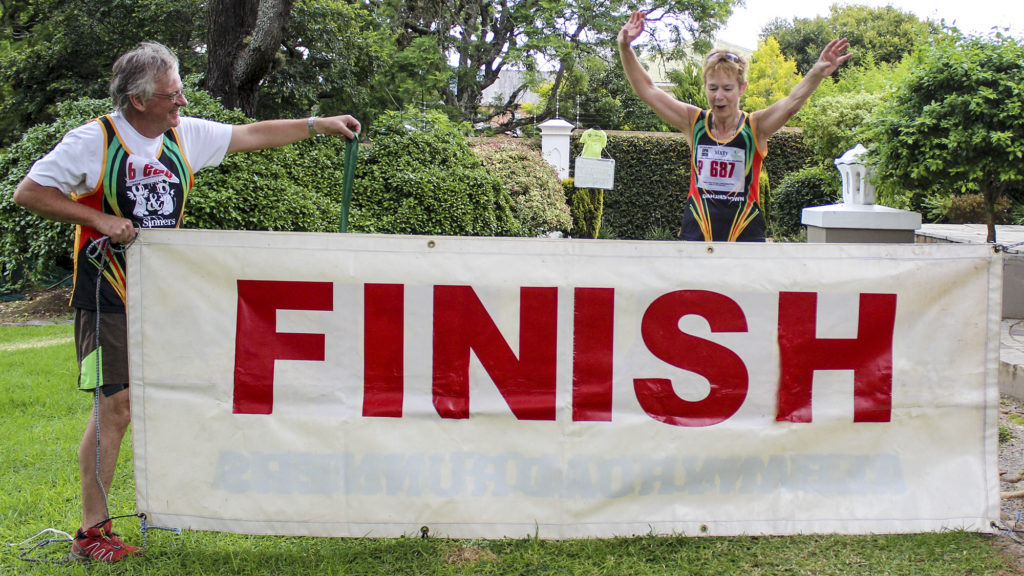 Colin Price-Smith holds up the 'FInish' banner with one hand and hands Sally Price-Smith her medal with the other as she completes 56km in the couple's back yard. Colin had earlier completed a half marathon. Photo: Sue Maclennan

“We will not be going ‘left’ again for a while!”

That’s what Makhanda couple Sally and Colin Price-Smith vowed after completing the Two Oceans Marathon – or at least the equivalent – in their back yard.

Sally set off at 6.10am on Saturday 11 April to complete the 56km ultramarathon.  Forty minutes later, Colin began his half-marathon.

Dubbed the ‘Two Streets Marathon’ because the couple’s property runs between two streets in Makhanda, it was far more than just a lockdown dare, however.

The ‘56km for Makhanda’, run at the couple’s home under lockdown regulations in 0.18km laps of the couple’s driveway and back lawn, had raised over R50 000 by the end of their run, with around R12 000 more in pledges still to come.

The money will contribute towards a relief fund for vulnerable people in Makhanda affected by Covid-19 and the lockdown.

The Price-Smiths had perfect weather for the event and Sally’s 6.10am start was to the strains of the national anthem, “under a stunning full moon”. She completed her 311 laps totalling 56km in seven hours and 41 minutes.

“Our loop preference varied with our legs and towards the end Sally was loving the “Chappies” down run and walk up more than the loops on the grass,” they posted on Facebook.

“Typically the 30-40km section was the hardest!”

The couple had entered the Two Oceans Marathon and would have run the Cape Peninsula event on 11 April. Chapman’s Peak overlooking Hout Bay is an iconic part of the race route and is one of the toughest sections. The couple named the short uphill section of their driveway “Chappies”.

What took them by surprise, they told Grocott’s Mail immediately after the event, was just how exhausting it is to repeatedly do sharp turns when you’re running.

“With all the sharp turns, the hilly driveway and having to negotiate around a pool, it took us a bit longer than anticipated,’ Sally later wrote. “We will not be going ‘left’ again for a while.”