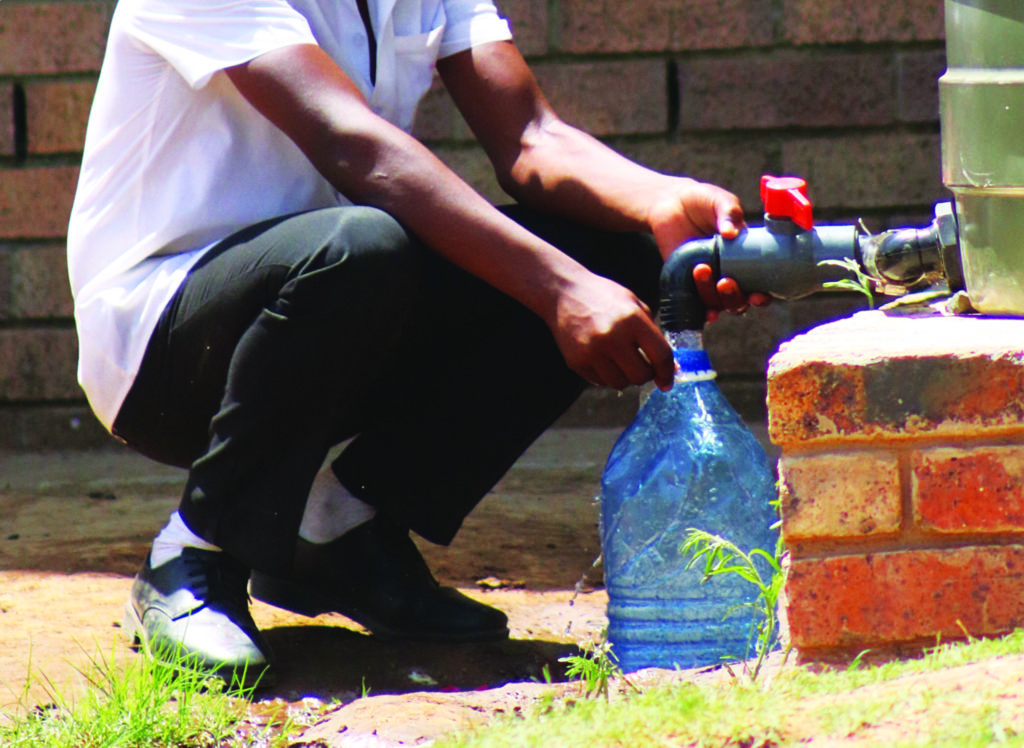 By Jacqueline Holloway and Nienke Botha

There are days when pupils at Samuel Ntsiko Primary have to relieve themselves in the bushes behind the school, and there are days when the school has to send the children home early. Along with water outages that last for days on end, the school is also faced with theft from its tanks from neighbouring residents.

The school has 527 learners and relies almost entirely on water from eight 5000-litre tanks tanks. This should be enough to see the school through a week or more without municipal water in the taps.

But when the town experiences water outages, desperate residents from surrounding streets  climb through the gaps to take water from the school’s tanks.

“That’s why we sometimes run out of water,” says Principal Nombulelo Koliti. “People come at night and steal water.”

The school, supported by the SGB, has tried to engage with the surrounding community, but to no avail.

The Department of Education intervenes by asking Makana Municipality to deliver water to the school.

Department spokesperson Loyiso Pulumani, said, “Depending on the rain, what the school has may last for the next two weeks. The water problem is now a national issue and the department has been communicating with schools, especially on saving water.”

When this reporter visited the school two weeks ago, it had been without water for four days already. Last year was even worse, but things had improved a bit, one staff member said.

“The problem with the toilets is infrastructural, but the plumbers cannot sort out the problem because there is no water,” Koliti explained. She said the learners sometimes had to relieve themselves in the bushes behind the school rather than using the toilets.

Samuel Ntsiko is one of the few schools that has not had high-security fencing installed.

“We have a problem with fences here,” Koliti said. “People living around the school bring their donkeys and cows to graze the school fields. To do that, they open a gap in the fence. Every time we close the gap, they open it again.”

The school is now on the priority list of the department of education to get proper fencing and Koliti says that they are hoping to instal security cameras in the near future. They are also planning to get a gatekeeper.

Koliti hopes this will improve the issues with security at Samuel Ntsiko school, and by extension their water shortages, since it would keep people from invading the property and stealing water from the tanks.