‘We’re not waiting another year’ – UPM 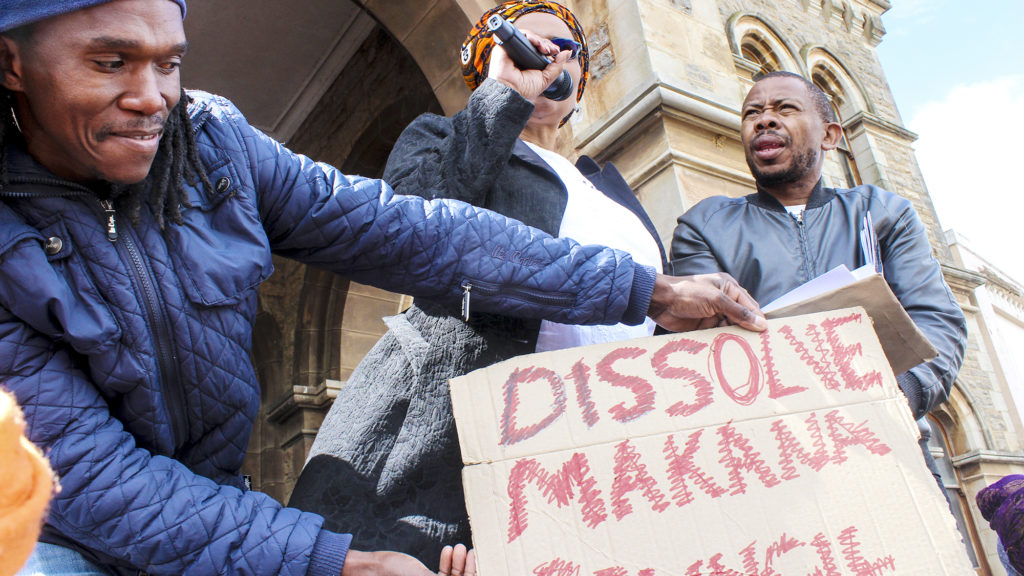 UPM member Sithembele Sithunda holds up a placard calling for the Council to be dissolved and Ayanda Kota looks on while Makana's Corporate Services Manager Nomathandazo Mazwayi signs a petition outside the City Hall in November 2017. Photo (2017): Sue Maclennan

The Unemployed People’s Movement (UPM) will oppose the government’s likely bid to stall the dissolution of Makana Council, the organisation says. This comes as Mayor Mzukisi Mpahlwa admits the municipality is living on borrowed time.

Hours after Judge Igna Stretch’s order for the Eastern Cape government to dissolve the Council and put the municipality under administration was handed down in the high court in Makhanda on Tuesday 14 January, the ANC’s Regional leadership indicated they would encourage the government entities among the 15 respondents to appeal it.

As Eastern Cape Premier Oscar Mabuyane later confirmed this would be the likely course of action, civil society organisations called on the government to instead accept and act on the judgment. The UPM’s Ayanda Kota said it would be a dark day for democracy were the government to oppose a court ruling.

Now the UPM has confirmed it will make a new court application to ensure the order is enacted immediately and cannot be delayed. An appeal could see urgently needed remedies delayed by up to a year.

The Judge’s two-page order said Makana had failed to provide services to the community in a sustainable manner, promote a safe and healthy environment, structure and manage its administration, budgeting and planning processes, prioritise the community’s needs and promote its social and economic development. Makana Municipality had breached sections 152(1) and 153(a) of the Constitution and was therefore declared invalid.

And she ordered the Province to immediately dissolve the Council, appoint an administrator until a new Council is elected and approve a temporary budget to keep Makana Municipality functional.

Attorney representing the UPM Brin Brody said the respondents – who include the Premier, the Co-operative Governance MEC and the President – have 21 days to apply to the Judge for leave to appeal. Should the Judge refuse leave to appeal, they can then apply to the Supreme Court of Appeal.

Commenting on Premier Oscar Mabuyane’s assertion that the process of an appeal effectively suspends the Judge’s order, Brody told Grocott’s Mail on Friday, “We are not going to allow that to happen. We are going to apply to court on the basis that the order must operate despite their appeal because of the very serious allegations of urgency in the papers – the environmental crises etc.

“The matter has already been delayed by a year and we can’t wait another year. Those are my instructions from the UPM.”

Spokesperson for the Premier Mvusiwekhaya Sicwetsha on Monday 20 January confirmed that the Province’s position remained the same as announced last week – i.e. that they were consulting with their lawyers and that the judgment’s effect would be suspended until the provincial government had decided how to respond to it.

Judge Stretch’s ruling is the first of its kind in South Africa. It sets a precedent that could have far-reaching effects for dysfunctional municipalities across South Africa.

Meanwhile, at the Makana City Hall, attitudes to the ruling vary widely.

Mpahlwa was speaking to Grocott’s Mail, hours after a briefing he and Municipal Manager Moppo Mene attended on Friday 17 January with Co-operative Governance MEC Xolile Nqatha.

“The MEC told us that the attitude of Provincial Executive is that they must appeal the decision.”

Asked whether Makana Municipality was likely to also appeal, Mpahlwa said if the Province appealed there would be no need.

“If the Province appeals, it means they’ve thrown Makana a lifeline and it survives. We cannot take a decision contrary to that: we just have to wait for a directive.”

He said on the basis the Province was appealing, there would be no need for a special council meeting [i.e. for councillors to decide on a response]. The Judge’s ruling would certainly be an item for discussion at the first full Council meeting of the year on 30 January.

However, the Mayor said it would definitely not be “business as usual”.

“We’re living on borrowed time, he said. “The Premier said this has to be a wake-up call for all municipalities. It can’t be business as usual.”

While nothing has changed materially at the City Hall, reactions among councillors, managers and ordinary staff at municipality have varied. The impact of the ruling was overshadowed by the untimely deaths of three staff members, whose memorial services were all held in the past 10 days.

One staff member, speaking on condition of anonymity, speculated, “Everyone is happy, even the ANC. Except the ones in control [the Troika].

“People are afraid to speak out, but I can tell you that most people in the municipality think this is a good thing.”

As for reactions outside municipal circles, one ANC Councillor said, “The Facebook crowd are very happy – but for ordinary people out there, they’re not celebrating.”

The South African Municipal Workers Union in Makana last week distanced itself from a statement issued by the union’s national secretariat, on the basis local membership had not yet been informed of the implications of the ruling, nor consulted on their response.

Secretary of SAMWU in Makana, Wandile Duruwe, did not comment on the content of either the judgment or the SAMWU secretariat’s statement. However, he emphasised that local members had not been consulted before the statement was issued.

“We are a mandate driven union and we did not get any mandate regarding the judgment,” Duruwe told Grocott’s Mail last week. “We still have to call a general meeting for our members and bring in a legal person who will explain the judgment. Then we will take a decision and release a statement.”

Grocott’s Mail’s reports on the court action have been followed avidly online, as well as by our print readership, since our first report on the UPM’s application in February 2019.

For example, within hours of sharing last Tuesday’s outcome along with Judge Stretch’s two-page ruling, almost 35 000 people had been reached via the Grocott’s Mail Facebook page, with the even more telling statistic of close to 9000 engagements.