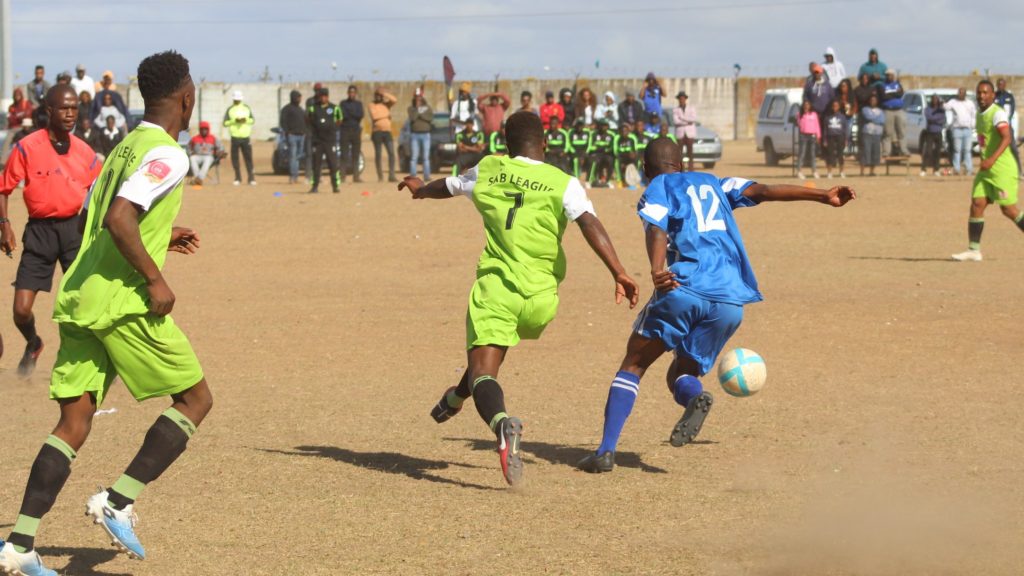 MARU and New Brighton Academy in action in the semifinal of the New year's Cup at JD Dlephu Stadium on 28 December 2019. Photo: Sue Maclennan

The New Year’s Cup Tournament brings something special to our town. Chris Totobela talks about what worked well – and what needs a rethink.

The launch of the 2019 edition of the New Year’s Cup finally got under way after a very long wait, which frustrated the delegates. It was so sad to notice that the defending champions were nowhere to be seen and it got people talking. There was a long list of speakers.

A noticeable change has been the new sponsor, Bettaway, in place of La Liga.

The draw was made without any hiccups and the local teams were drawn into very tough groups. Most of the group stage games were scheduled for the army base, some at Rhodes and only one or two scheduled for the home of local football, JD Dlephu Stadium.

Dlephu was scheduled to host only three or four group games, which is unusual considering the knockout games, including the final, would be played at Dlephu.

Our local teams had a very tough tournament and only one of them made it to the next round. I managed to watch New Seekers, Sophia Stars, Attackers and Maru.

One thing that we can applaud our teams for this time around is that they tried their best to work together. Sophia Stars and Attackers strengthened their teams with players loaned locally – a first step toward working towards one common goal.

New Seekers worked hard and I liked their never-give-up attitude.

Attackers had a very good combination of players who really gave their all, but lack of match practice prior to the tournament let them down. They also need a very strong technical team.

Sophia Stars did well, but fell on the last hurdle. With a strong technical team they could have done even better.

Maru, as I predicted just before the start of the tournament, proved the strongest of the home pack. They played with their own players, whom they’d been using throughout the year, and invited only one player from another team. This worked well in their favour.

Their aggressive style of play intimidated their opponents and it was just a matter of bad luck that they fell on the semis via a penalty shootout.

Coach Wandile Duruwe was brave and man enough to acknowledge the mistake he did by bringing on a defender in the later stages of that game while trying to close shop. The best coaches in the world make one or two critical mistakes, but the most important thing is to learn from them.

Most of the knockout games were played at JD Dlephu stadium, which was always packed irrespective who was playing.

The standard of this year’s competition was very high compared to the previous editions – an observation echoed by Bhisho Stars coach Shuuz Klassen.

“The standard of this edition has improved a lot. I have visited Makhanda for all the last editions and the football that has been played here this year was top class. The vibe of this Dlephu stadium is something that makes every player perform his level best,” said Klassen.

The standard of refereeing has also improved and I have seen very few blunders compared to previous editions.

Local coaches have varying opinions about the impact of this NYC in Makhanda.

Joza Callies manager Louis Ntlanjeni said, “I can’t really see what this tournament is doing for our local football and how it helps to improve the standard of our league.”

Sophia Stars manager Lindisipho Swaartbooi, however, said, “The timing of this tournament is perfect and our teams need to take it seriously. It would be better if more local people can be involved so that they can learn.”

CEO of the tournament Luyanda Papu, responding to some the concerns, said, “With regard to the defending champions having to vote to participate, we pay them a lot of prize money and we expect them to use that money wisely for the running of their clubs – not for any other thing. To them it will be a drop in the ocean to take R1500 and use it for voting.

“In terms of the impact of the tournament and what it does for local football, you must remember that this is a privately owned tournament. We only work with the provincial office of Safa and if there is anything that has to be done for the local football league, Safa EP and the region are the ones who will take care of that.

“We had a meeting with the regional executive and we also invited the Makana LFA chairman. We have left something there and I can’t mention it in the paper.

“We have acquired PSL accredited referees for this tournament and the delay before games was caused by the fields not being ready. We also had to wait for SAFA representatives to arrive before we could start the games.

“Lastly, we are the only tournament in the entire country that provides transport and accommodation for participant.s”

Papu was responding to many issues raised by coaches and officials, as well as the football public.

My worst moment of the tournament was seeing Dreamboat fans misbehaving in their quarterfinal clash against Peddie Legends, where they were beaten 3-1. They attacked an assistant referee and even threatened to invade the pitch. This is not something that the Dlephu crowd is used to.

My best moment of the tournament was when I saw the Dlephu crowd packing the stadium to the rafters in the final game – even though there was no local team involved. The love and support they showed to both teams showed their maturity and proved that they are really the true supporters of the game.

The 2019 edition has come and gone, but there are still a few things that I think need to be looked at.

If this tournament is more about developing raw grassroots talent, why not include our local referees and administrators to learn and develop their skills?

I found it strange that before the start of some of the games at Dlephu, players were introduced to some children who happened to be at the venue and there were a few Makana LFA officials present. There also many other local former football greats and personalities who could be used like TV Monaheng, Mnyamezeli Ngoqo and many more.

As much as the NYC is privately owned, I still think it would do no harm to leave a small amount of money for Makana LFA. The CEO knows exactly about all the struggles faced by our local football and surely should lend a helping hand.

The matter of the defending champions having to vote again to defend their cup needs to be looked at again, as it is an embarrassment not to see them automatically getting a chance to defend their title. Why not give them an automatic entry and then allow people to vote for the remaining 31 spots?

The municipality needs to come to the party and do something about the state of JD Dlephu stadium, which has been in a poor state for years.

The organisers need to hire mobile toilets – we noticed how women who came to enjoy the games at Dlephu had no way to relieve themselves at the venue.

It’s been proved for the past four editions that, bad as the conditions at Dlephu might be, players enjoy their games there, as it is always packed.

I also think the organisers need to get proper security for games. I only see one person trying to control the crowd. It’s impossible for one person to protect all those players and match officials.

Last, I have always said this is a great tournament. Our youngsters enjoy it so much and it helps keep them off the streets at this crucial time of the year when many of our youth find excuses to abuse alcohol.

If this tournament is really about fighting alcohol and drug abuse, then bring more games to the people and don’t take them far away where they won’t be able to afford to go.

The 2020 edition promises to be a great spectacle and we are looking forward to see how the 2019 NYC champions will fare.