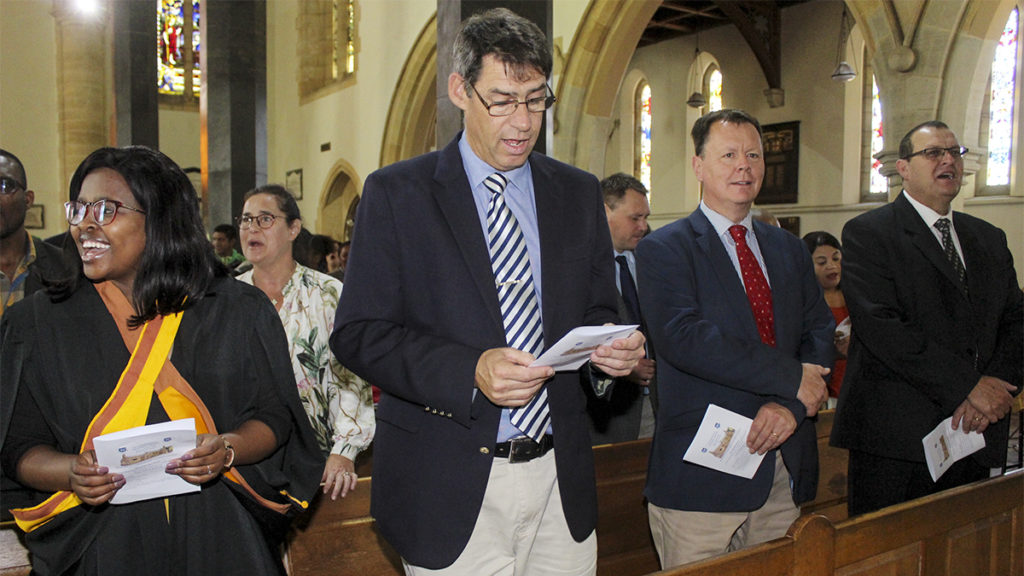 Principals from across Makhanda joined Good Shepherd Primary School in a special service to celebrate their 135th anniversary at the Cathedral on 4 october 2019. Photo: Sue Maclennan

Good Shepherd Primary School celebrated their 135th anniversary in a special service at the Cathedral on Friday 4 October.

Principals from schools across the city including St Andrew’s College, Diocesan School for Girls and Oatlands Preparatory filled the front pews alongside Good Shepherd Head, Manie Cronje. But it was clear that the real VIPs were the children: led by Reverend Claire Nye Hunter, the service began with a fun song that had children and adults alike jumping up and down in their seats, followed by a guessing game. Nye Hunter also delivered the Homily.

Headboy Alutha Botha and Headgirl Lunje Hoboshe did the scripture readings and speakers were SGB Chairperson Kwakhe Maramnco, Good Shepher Trust Chairperson Geoff Antrobus and school alumna Anesipho Klaas. Along with performances by the marimba band, there were also music items by the grades 1, 2 and 3 learners.

Built in 1844, the school caters for girls and boys from grade 1 to 7 and is one of the oldest schools in Makhanda.

The Good Shepherd School was established by Sister Cecile (later to become Mother Cecile), who founded the Community of the Resurrection of our Lord (CR) in October 1884.

At first, Good Shepherd was near the St Peters building on the Rhodes University campus. In 1918 the CR Sisters purchased the current building in Huntley Street (which housed the Cathedral Grammar School, forerunner to St Andrew’s College from 1849) and the Good Shepherd School moved into its current home.

Through funds secured from PetroSA in 2010 the new classroom block was built and the administration block refurbished. An Anglican School, Good Shepherd is now a ‘Public School on Private Property’, with the Good Shepherd Trust having stewardship of the school buildings and property.

The school’s learners come mostly from disadvantaged communities and so they have requested that any birthday donations go towards buying Number Sense Maths Teacher Training and learner Workbooks for next year’s grades 1-4. The cost is R26 000 and if you’d like to contribute towards that, please email the Good Shepherd Trust Manager Cathy Meiklejohn at g.trust@sacschool.com for banking details.