EMC students out on bail after protests 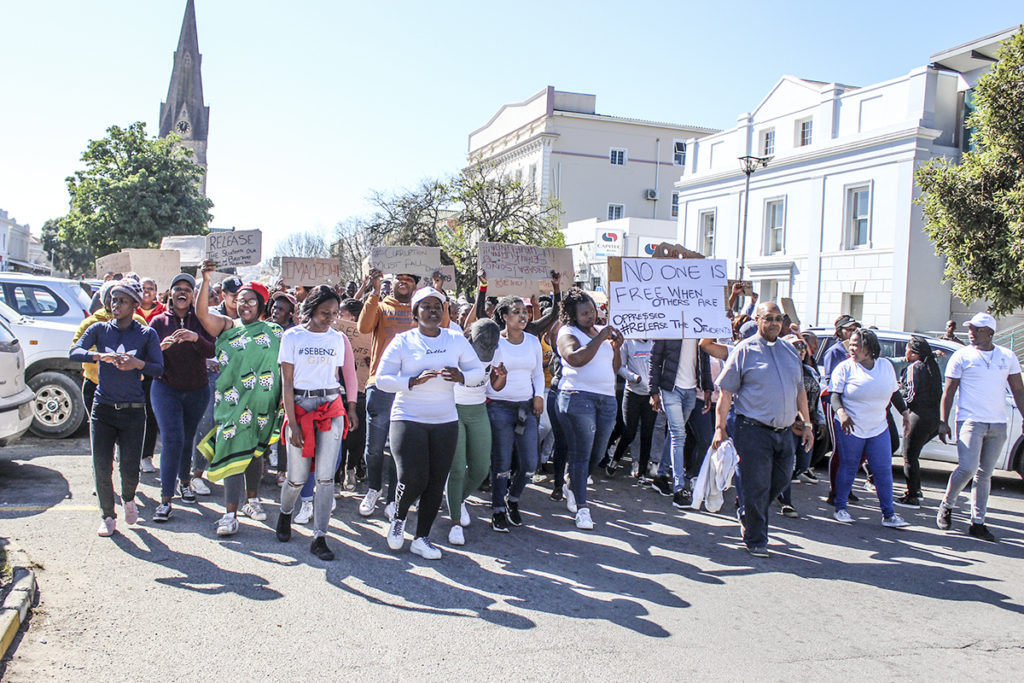 Eastcape Midlands College students march to the Regional Court in Makhanda (Grahamstown) in protest on Thursday 29 August 2019 against the arrest of 18 students the day before. They have grievances about NSFAS funding. Photo: Sue Maclennan

The 18 students were released without bail pending a court hearing on 18 October. They face the following four charges: public violence, offences relating to the Damage of Infrastructure Act, offences under the Gatherings Act and hindering the South African Police Service (SAPS) in the execution of their duties.

The protests began over several allegations: that the College refuses to pay out allowances; that there is a shortage of lecturers and that practical assessments and field trips continue to be postponed.

Unlike at universities, NSFAS does not distribute the student aid funds directly to students but to the TVET college which allocates the funds to students through a committee on financial aid.

Due to a technicality, students began their term at EMC halfway through the month. As a result, there was a misunderstanding over the attendance of students at their courses. The College allegedly refused to pay out students monthly allocations, basing their decision on student attendance, said Student Representative Council President and Sasco Convener Sabelo Madlala.

“There was no transparency about the process [to refuse to hand out allocations],” said Madlala. “Students can’t go to College if they don’t have funds for rent and transport.”

Some students complained that they had not been able to pay rent since March this year because of the College’s alleged delay in handing out the grants.

“Landlords are chasing us away. We don’t have food to eat,” said Tourism student Zikhona Mtiki.

The students say they qualify for NSFAS grants, but they have not received any allocation towards their rent and food, relying on friends and family to make ends meet.

Thuleka Norongo says she has not received her student aid from the College since she started in 2017. She lives with her grandmother, who has only a pensioner’s grant to support the two of them. She and several other students have been told that they owe the College money.

“How am I expected to pay off R8 674 when I am living with my grandmother?” asked Norongo.

The College responded that it could not comment on the arrest of the 18 students, as it had occurred outside of campus.

Regarding the protests and grievances, spokesperson for the College Kate Oladimeji told Grocott’s Mail: “Teaching and learning remains the utmost priority of the College, hence Management is committed to resolve all challenges raised by students.”

According to Madlala, the Public Order Policing unit from East London was called to disperse students who were protesting in front of the Makhanda (Grahamstown) campus on Wednesday. The Unit accused the students of blocking the road in and out of the campus.

**A student told Grocott’s Mail that the protest action outside the campus gates, which according to sources included the burning of tyres, was intended to alert campus management to their plight.

Following the arrest of the 18 students, Madlala along with his peers arrived at the Grahamstown Police Station searching from some answers.

“They had said we had 30 minutes to leave the police station or they would shoot. But our friends were at the station so we stayed,” said a student.

“Minimum force was used when the protesters failed to comply with an order to disperse,” said Govender. Minimum force may include the use of rubber projectiles and Govender later confirmed that reduced rubber rounds were used.

The student body has decided that it will keep protesting until the charges against its peers are dropped in their entirety.

* Police confirmation about rubber rounds added later.
** The student subsequently requested anonymity fearing repercussions and this has been accordingly edited.