Heat and grit… with a dassie, a tutu and a blunderbuss 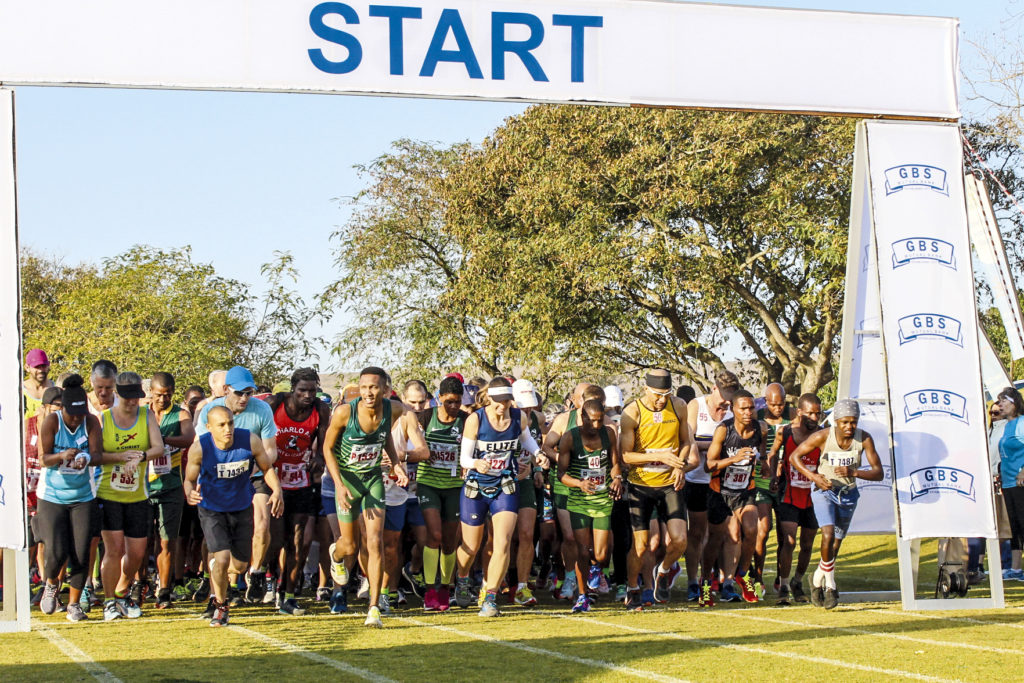 Runners set off from the Graeme College start of the GBS Mutual Bank Mountain Drive Half Marathon on Saturday 24 August 2019. The event hosted by the Rotary Club of Grahamstown Sunset is proudly local, with GBS as the main sponsor and Albany Saints and Sinners Multisport Club as organising partners. Photo: Sue Maclennan

With the day building up to a midday high of 32C on Saturday 24 August, it was just as well that organisers of the 2019 edition of the GBS Mutual Bank Mountain Drive Half Marathon had laid on an extra water table.

Bulelani Niwa from Ikhamva Athletics Club was the winner. Second and third overall were former Two Oceans winner George Ntshiliza and Anele Maliza, both from Nedbank Running Club. Ntshiliza was King of the Mountain.

Local runners Terri-Lynn Penney and Claire McCann placed second and third in the women’s race, with Terray Newcombe from Elite Athletics Club taking the title, as well as Queen of the Mountain. Penney won the women’s 40-49 category.

It was his second time to win this race – the last time was in 2017 – and Ntshiliza, who is his coach, was thrilled for him.

“I told myself I know I can do it, so I trained hard,” Niwa said.

“I didn’t go too hard because SA Cross Country Champs are in two weeks,” Penney said. “Actually it was one of my slower races.” Penney’s fastest time on the route is a blistering 92 minutes.

Category winners were full of praise for the race organisers.

60-plus women’s winner Avril Beyleveld said “It was very well organised. Even though it was very warm and the hills are tough, it was a fantastic race.”

Men’s 60-plus winner Alan Taylor said, “Well, we didn’t come here to take it easy and it’s not a race to achieve your PB. I had a tough first half and an easy second half.”

Men’s 50-plus winner Mzukisi Klaas overcame severe cramps on the mountain, to secure a top-10 finish in 1:29:14.

Legendary sports photographer Stephen Penney was still smiling at the top of the mountain and veteran runner and Polar Plunge co-founder Richard Foss managed a wave.

VGHS was well represented, with teacher Nadia Czeredrecki among those on the road, and the school winning the prize for the best water table.

Musician Susan Kunju’s family came out in full force to support her.

Two members of the Grocott’s Mail team braved the heat and dust: visiting journalist Chris Gilili popped up at the top of the mountain and Kathryn Cleary – clad in a blue tutu – managed a grin at the summit, despite a tough race.

“I knew going into the race that it wasn’t going to be pretty. I hadn’t trained as much as last year, and the weather was shaping up to be scorcher. But it’s always been a goal of mine to run a race in a tutu, and that’s what I did! So even though my running wasn’t pretty, my tutu was, and that’s pretty cool,” Cleary said.

It’s touches like this that give an event its own unique character, and the GBS Mutual Bank Mountain Drive Half Marathon has plenty – from Basil Mills’s blunderbuss to start the race, local artist’s Tori Stowe’s creation, Dash the Dassie as a race mascot to Rotary’s trademark kudu burgers at the finish.

Jaco van Dyk, chairperson of race partners Albany Saints & Sinners (ASS) multisport club marshalled on the day and said most runners had felt the heat as well as the hill. “Well, when this race was conceived it was originally known as the Mountain Drive Tough One! The weather was great but a rather hot day in the end,” Van Dyk said.

“It is difficult to start earlier, as we want to accommodate our out of town runners, but we’ll see if we can amend this for our 2020 event.”

The amended finish had added a few small hills as the runners entered Graeme College from the southern swimming pool entrance.

“However, we received feedback on the route distance being close to perfect,” Van Dyk said. “Two of our local ASS runners finished in the top 10 and over 50 local runners completed the half marathon.

Van Dyk said the organisers had learnt a lot from their second event and could only improve on it. “We hope to see you all again for the 2020 GBS Mutual Bank Mountain Drive Half Marathon!”

Race Organiser Tim Dold of hosts, the Rotary Club of Grahamstown Sunset, said they were delighted with the success of their second event.

“We managed to improve in areas that we identified for attention last year. We know that there are still aspects that we can improve for 2020 when we will again have the support of the GBS for the event.”

The Dassie Dash race would be revamped, “so we hope to see the serious and the not-so-serious runners here again in their numbers next year”.

“We’re grateful to all our sponsors and the many organisations that contributed to the success of the day.  The Rotarians had a lot of fun organising this event, and we are committed to making it something Grahamstown can be proud of.”