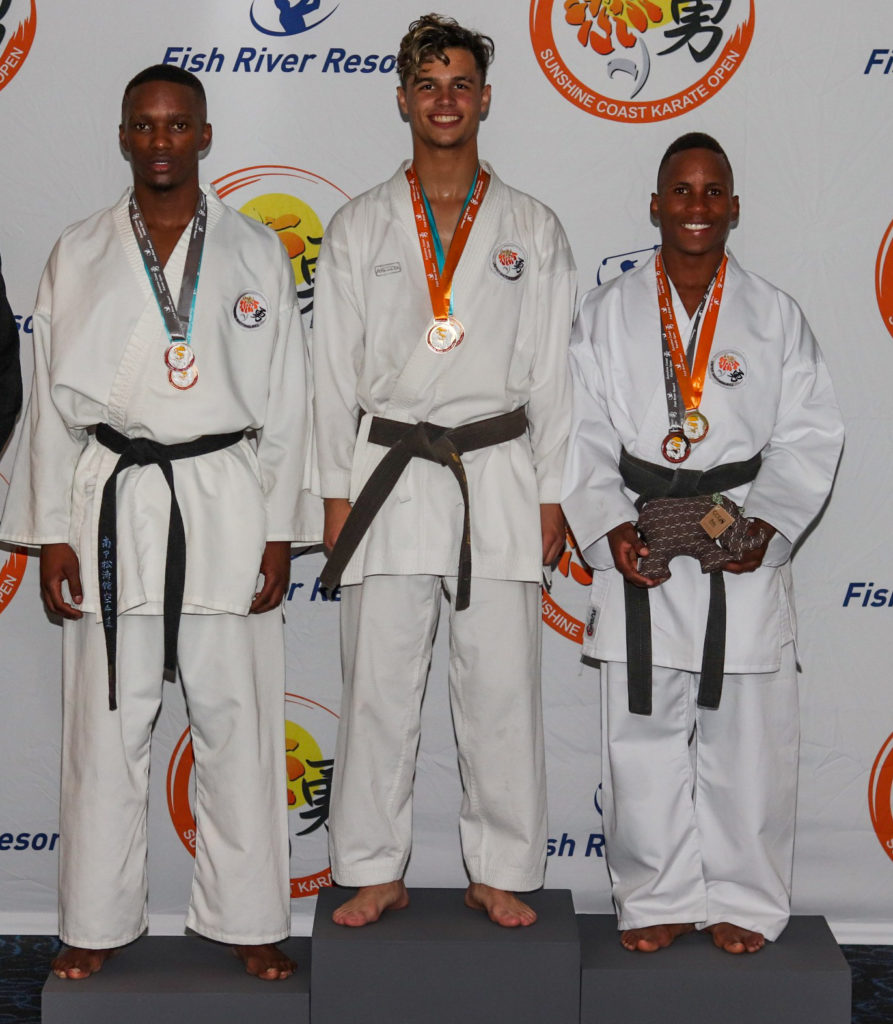 The Second Round of the 2019 Sunshine Coast Karate Open (SCKO) Championships was held at the Fish River Resort on Saturday 27 July. The Championship was organised by East Cape Shotokan-Ryu under the auspices of United Shotokan-Ryu. This was the 13th successive year that the Resort played host to the Championship.

Competitors from dojos across the Eastern Cape, contested the various categories which ranged from novice to elite level. East Cape Shotokan-Ryu (Port Alfred, Kenton on Sea and Makhanda) placed top of the overall medals table, with Joza Karate Club (Makhanda) in second place and ISKF East London in third place.

The top five positions were rounded off by Rhodes University Shotokan Karate Club and PE Noord in fourth and fifth positions respectively.

In the Senior Men’s Open Kumite, nineteen year old Rhodes University Karateka, Brent Smith claimed a convincing win over Thanduxolo Royi (Joza Karate Club) in the final match. Royi has been in excellent form of late, having won the bronze medal in the Men’s U65kg Kumite Category at the WUKF World Championship held in Slovakia in June.

The final score was six points to three in favour of Smith. In Smith’s third round match, he also clinched a solid six points to two victory against fellow Rhodes University Karateka, Lutho Singata. Singata went on to place third. Smith, Royi and Singata were all members of the United Shotokan-Ryu team which competed at the WUKF World Championship in Slovakia in June. In the Senior Men’s Open Kata Category Thanduxolo Royi won the gold medal with his performance of the kata, Unsu. Singata and Smith placed second and third respectively.

The Senior Ladies Open Kata and Kumite were both closely contested Categories. In the Kata Category, Juanne Van Zyl, Tanya De Villiers (both PE Noord) and Michelle Du Plessis (Algoa Bay Karate Academy) all finished with an overall score of 23.7. By virtue of having the highest, lowest remaining score, Van Zyl was awarded first place, with De Villiers and Du Plessis ending in an exact tie. In the rematch with involved both competitors having to perform a second kata, Du Plessis emerged as the silver medallist with De Villiers having to settle for the bronze medal.

The rivalry between De Villiers and Du Plessis continued into the Senior Ladies Open Kumite Category in a hard-fought final match. Once again Du Plessis had a slight edge on her opponent winning by 6 points to 5 in an exciting and action-packed final.

According to Organiser, Gary Grapentin, the Championship was a tremendous success with a number of excellent individual performances. This was also the final round of the Sunshine Coast Karate Open Series for 2019. The First Round of the Series was held on 4 May at the Boardwalk Hotel in Port Elizabeth. A total of 21 dojos contested the Series this year, including dojos from the Western Cape and Gauteng. The overall results from Rounds’ I and II are as follows:

Grapentin is looking forward to next year’s SCKO Championship and is hoping to further improve on the Series. For further details about the SCKO Karate Championship Series, Grapentin may be contacted at garyg@geenet.co.za.