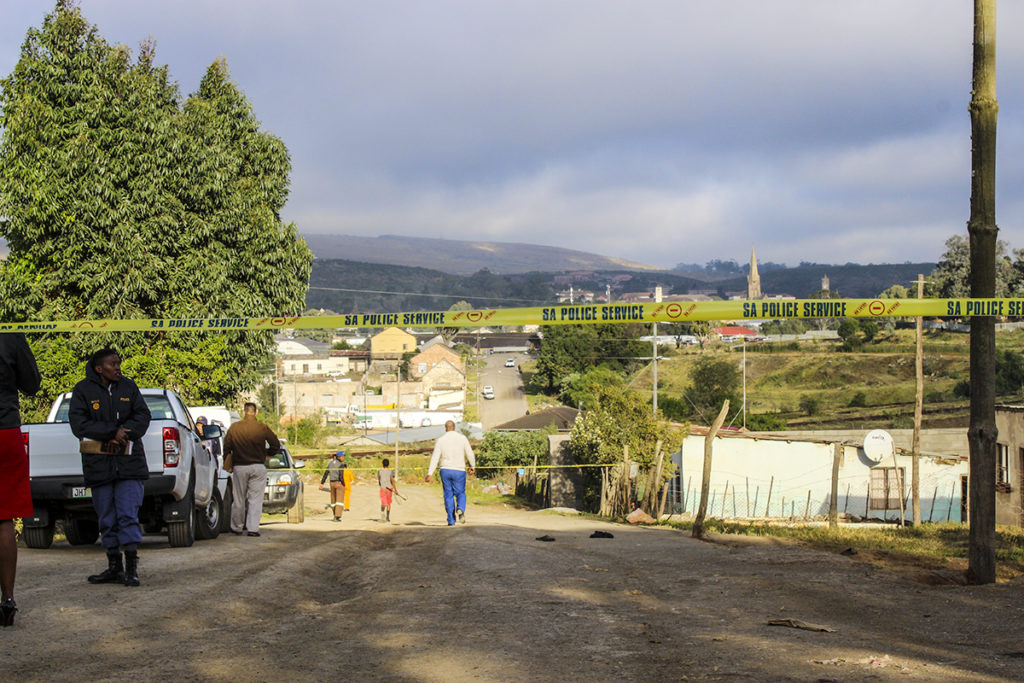 Police tape intersects the view of the city from Victoria Street, Makhanda, on Wednesday 10 July 2019. Police have urged anxious residents to give them time to properly investigate the circumstances of the death of a woman whose body was found there. Photo: Sue Maclennan

BREAKING (Friday 12 July at 1pm)
Police last night arrested a 50-year-old man in connection with the death of a woman whose body was found in Victoria Street early Wednesday morning.

Police spokesperson Captain Mali Govender this morning told Grocott’s Mail that while the cause of death had not yet been conclusively determined, the woman had sustained several stab wounds on her back.

Grocott’s Mail understands that the man is believed to have been the victim’s partner.

“We are now investigating a case of murder,” Govender said. “The male, in his 50s, will appear in the Grahamstown Magistrate’s Court early next week.”

Police have appealed to residents to allow them time to fully investigate the circumstances of death of a woman whose body was found in Victoria Street early on Wednesday 10 July. Referring to speculation circulating on social media, they said no foul play had been found in recent past cases where bodies had similarly been discovered on open ground. This week’s case was still under investigation and they therefore couldn’t yet share their conclusions about the circumstances death of the woman, whose identity is still unknown.

The badly disfigured body was discovered at sunrise, lying in an open patch of ground between houses, by a supermarket cashier on her way to work. Outraged and alarmed, community members demanded answers. They said this was the second such incident in that neighbourhood within a few months, and that there had been similar disturbing incidents in other areas previously.

Some residents believe the woman, whose identity the police are trying to establish, was attacked by dogs. Packs of stray dogs roam many parts of the city, noticeably in Tantyi, where the body was found, as well as Hlalani, Xolani, Fingo and Joza.

A high-level delegation of experienced senior police officers, including some of the most successful investigators from Joza and Grahamstown Detectives, faced questions from anxious community members in BB Zondani Hall yesterday evening. Alongside them were councillors from the areas affected, Ramie Xonxa, Luyanda Sakata and Siyamthanda Dyantyi.

Head of Visible Policing for the Grahamstown Cluster Colonel Willie du Plooy, alongside Head of Visible Policing in Joza Colonel Martins Memani, spoke to the gathering of around 150 mostly young people, most of them women. Du Plooy and Memani said foul play had been ruled out following investigations into several incidents in Joza over the past few months.

“There have been other incidents where bodies have been discovered outside, exposed. Foul play has been ruled out in these cases,” Du Plooy said. In the case of a body found in Victoria Street earlier this year, foul play had also been ruled out. “Post mortems were carried out in all cases by the District Surgeon in Grahamstown, except for one which was carried out in Bhisho.

“The most recent incident is still under investigation,” Du Plooy said, explaining that for this reason, the police could not share their findings about it so far, except that they were in the process of identifying the body. “At this stage we can’t divulge information about the most recent case, but we assure you we are investigating this thoroughly.

“We appeal to residents to bear with us, give us a chance to investigate the circumstances around this case properly,” Du Plooy said. “We also appeal to the community to come forward with any information that may assist.”

The police said they were aware of the problem of stray dogs in Tantyi and Joza and were working with Makana Municipality and the SPCA to address it.

Poor lighting in the areas where the bodies were found had also been a concern and Makana had assured the police that high-mast lights would be restored to working order.

When Grocott’s Mail arrived in Victoria Street just before 9am on Wednesday, police forensic services were there, along with local councillor Luyanda Sakata.

“It’s the second time for this to happen here,” Thembinkosi Sankobe said. “Last time it was just across the road there,” he said, pointing opposite the place where the woman’s body still lay. “That time also it was dogs.”

Police have not confirmed the cause of death of another woman whose body was found in Victoria Street around a month ago.

Sankobe also said the area was dangerous because a mast light meant to illuminate the area had been inoperational for several months. “We’ve told the councillor, but nothing has been done,” he said.

“I was taking my kids to school when [the neighbours]came and told us about this,” he said.

The disfigured body lay in a small patch of open ground between houses. Residents said they hadn’t heard or seen anything unusual. The police have not confirmed that the victim was mauled to death by dogs.

Sakata, who is the Ward 10 councillor, said he’d called a meeting with residents earlier this year, where they’d been addressed by the SPCA as well as Makana’s Parks Department.

“We told residents they should not have more than two dogs and they must close their yards properly so the dogs stay inside,” Sakata said. “Thando [Dlalani, from the Makana Parks Department] said any stray dogs would be caught and taken to the SPCA.”

Police spokesperson Captain Mali Govender did not confirm the suspected cause of the woman’s death, and said an inquest for investigation had been opened.

Makana Mayor Mzukisi Mpahlwa visited the scene Wednesday morning. He was briefed by the police and councillors. Later, he met with a top police delegation to discuss community concerns about the incident.

Speaking to Grocott’s Mail late on Wednesday, Mpahlwa said the municipal electrician had been tasked with urgently attending to the high-mast lights in the area to ensure these were functional. He said these should be operational by the end of the week.

“This is sad and shocking,” Mpahlwa said earlier of the incident, echoing the plea from the police for time to properly investigate the woman’s death. Speaking at the Victoria Street site soon after the police arrived, he said, “We urge the community not to speculate on the cause of death. Please allow the police to do their work in solving this.”