Breakthrough for Makhanda artists in 2019 Festival 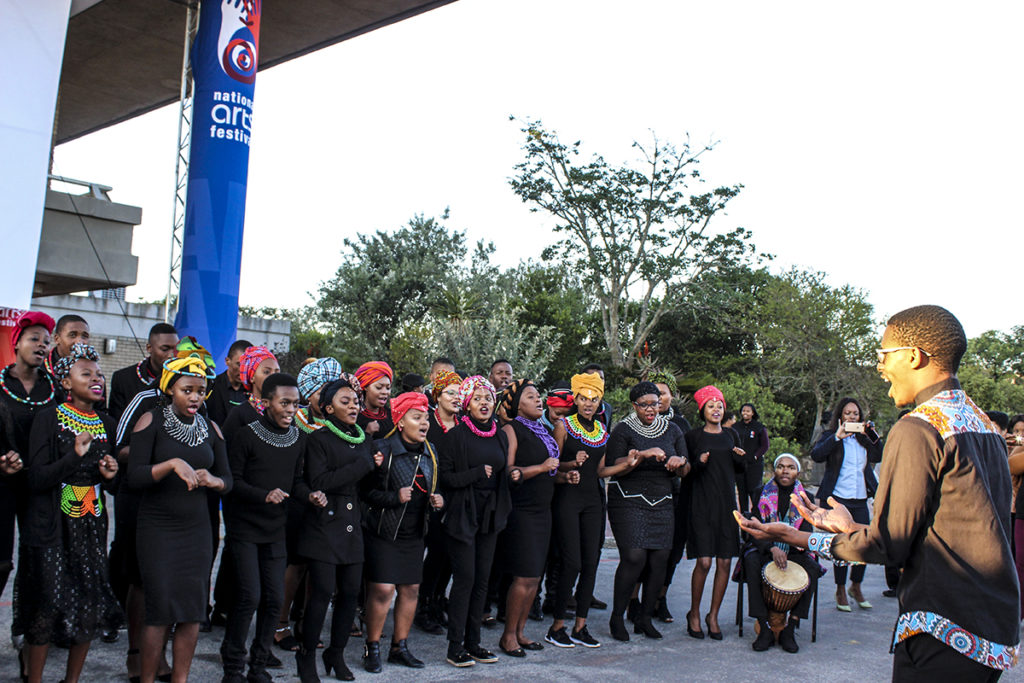 Makhanda Kwantu Choir and the Rhodes University Drama Department were among the winners of Standard Bank Ovation Awards in the 2019 National Arts Festival.

The National Arts Festival closed on Sunday 7 July. A sold out performance by Freshlyground and a free parade through the streets of Makhanda helped see out the Festival.

Organisers say it’s too early to report on how the Festival performed, but the overall impression is that the 2019 National Arts Festival was resilient in tough economic times and very well received by audiences.

This year the Ovations panel (who anonymously visit productions on the Fringe) comprised 28 members including artists, theatre practitioners, academics and other experts in the cultural field. Theatre-maker Mandisi Sindo was the convenor of this year’s panel, and he was joined by co-convenors Tara Notcutt and Nondumiso Msimang.

The Standard Bank Ovation Award ceremony honoured all the winners of Ovations recognised throughout the Festival’s run, and also named the winners of the prestigious Gold, Silver and Bronze Awards. Special awards were also given across numerous categories.

Among the full list of Standard Bank Ovation Award Winners for 2019 were the Makhanda Kwantu Choir, for their performance, Voice Dance! and winners of the Best Overall Student Production, Rhodes University Drama Department, for their work, SALT.

Kepadisa is thrilled at Kwantu’s Ovation Award, but even more so for the valuable inspiration and support that local acts received during the 2019 National Arts Festival.

“That’s what Festival has grown to become for our local singers and groups,” Kepadisa said.

“We had a great number of choir combinations: Makhanda Massed Choir at the opening ceremony; Byrd Songs (Faure’s Requiem), and Saeculum Aureum (Better Times), which brought a beautiful local choral aspect to the festival’s fringe this year. Then there were the Cathedral Choir’s Haydn’s Mass, and other choral services, as well as spirit Spiritfest’s Choral Extravanganza which brought singing to the sacred centres around town.”

KWANTU had a streak of back to back productions in the second week of the Festival.

After a combined concert with a fellow Ovation Award-winning choir, Quava Vocal Group, from Johannesburg, KWANTU vocalists sang in the Arena Production, Seasons: Dorothy Masuka’s song book in the style of Vivaldi.

Then they had their debut Fringe production, Voice Dance, which received a Standard Bank Ovation Award.

The next day, the choir sang extracts if Zoltan Kodaly’s Missa Brevis – a work KWANTU hopes to soon present to the city.

“It was one of my most uplifting Festivals yet,” Kepadisa told Grocott’s Mail.

“I felt like I was working to make good productions and people loved it, and it was wonderful to feel that with our fellow artists. I cherish it so much, that we have the National Arts Festival in Makhanda. It brings something hopeful to our city’s atmosphere!

MORE ABOUT THE OVATION AWARDS

Winning an Ovation Award is considered an important mark of quality work and the accolade forms a pathway from the Fringe to the Arena programme for which Ovation winners are invited to submit works.

Convenor Mandisi Sindo said, “The National Arts Festival Fringe programme is and has always been the heart of the National Arts Festival. It gives platform and a space to all art practitioners from all art forms. The Fringe programme was made up of hundreds of productions including theatre, family fare, comedy, illusion, dance, contemporary music, music recital , poetry, visual art, film and physical theatre. Some from the development phase of creation and others already in the professional spectrum. This year’s Fringe festival productions spoke strongly of the political and environmental issues that affect us all.