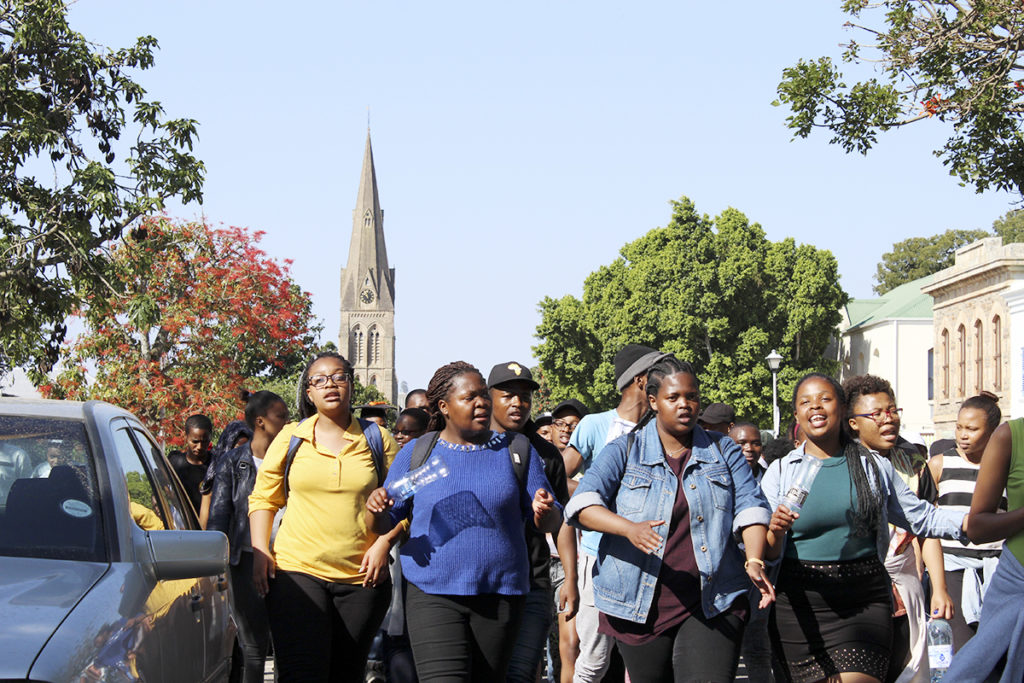 Rhodes University students march up High Street on 21 October 2016, the day after Tshwane University of Technology student Benjamin Pehla died after being hit by a passing car during #FeesMustFall protests in Pretoria. Cathedral Dean Andrew Hunter talks at Spiritfest this year about the student protests in 2015 and 2016. Photo (2016): Sue Maclennan

This year coming to Spiritfest will be Makhanda’s very own Reverend Dr Dean Andrew Hunter, who will lecture under Spiritfest’s Winter school section. The lecture will follow the format of a talk and Powerpoint presentation. Discussion in a question and answer session will be welcomed. The presentation focuses on the topic of student protests at Rhodes University from 2015-2016.

Born in 1957, in KwaZulu-Natal, Andrew grew up in both Pietermaritzburg and Stellenbosch and Cape Town. After matriculating in 1974, he continued his studies at UCT, UWC, Cardiff University, NMU and St Paul’s College (Grahamstown). Reverend Dean Andrews is an ordained Anglican priest who received his PhD in April 2019 from NMU for a thesis on student protests at Rhodes University and has been the Dean of Grahamstown (now Makhanda) since 2008. He is married with two daughters who are both students.

“Student protests, and the protests that form so much of our current South African reality, continue to be with us,” Andrew said. “My research helps to give some insight into the nature of the protests and suggests, through the lens of conflict transformation, ways to address these.”

The lecture will feature an explanation and discussion around Galutung’s conflict triangle and how this ties into the various dynamics of student protests which took place at Rhodes University over the time span of 2015-2016.

RhodesMustFall protested about issues of transformation and decolonisation within university structures and policies; FeesMustFall in 2015 and 2016 highlighted the demand for fee-free tertiary education; and the #RUReferenceList protest was a protest against rape and rape culture within the university space.

“Each protest had its own dynamic, and provided to a greater or lesser extent the potential for resolution,” he said. “This topic is interesting, relevant and disturbing.”

The lecture is on Thursday 4 July, 11am-12pm at the Cathedral, inside the Coffee Shop.

There is no entry fee for any Spiritfest events, but a retiring collection will be taken and any contribution will go towards the Spiritfest programme.