Travels in the Eastern Cape with Nqaba Bhanga 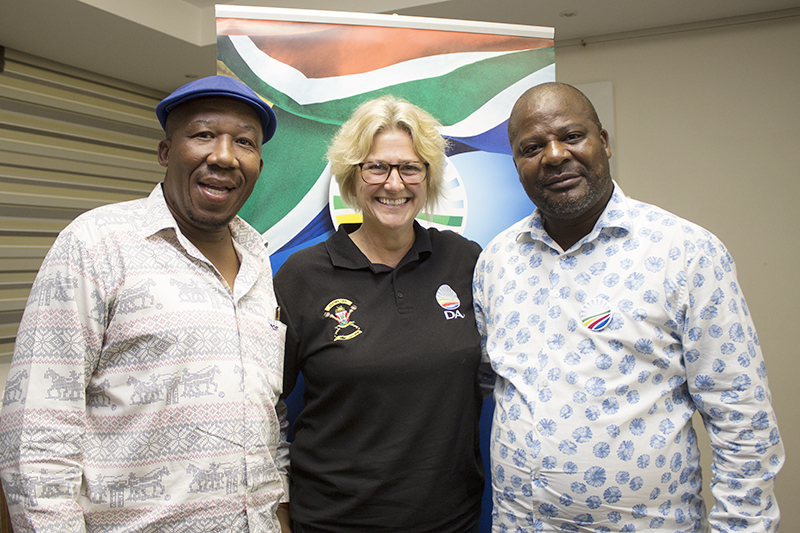 Infrastructure and service delivery across the Eastern Cape is in a dire state – particularly for the rural poor, says Nqaba Bhanga, who has travelled more than 35 000km in the province in the past five months. Turning it around requires strong leadership, and proper budgeting and maintenance. There’s money to fix our towns and villages, he says – but it’s not being used for the right things.

“I know what poverty is. Going into the villages of the Eastern Cape, I have seen poverty. Many South Africans in rural areas have been left behind.”

DA Premiership candidate Nqaba Bhanga was speaking to a group of businesspeople and professionals at a breakfast briefing in the Makhanda CBD recently. His address came at the end of four months of campaigning the length and breadth of the Eastern Cape, travelling tens of thousands of kilometres – many of them in rural areas.

Bhanga spoke of some of the things he’d seen, or been told: six children lost to Matatiele families because they’d had to cross a flooded river on the way home from school; another child who had fallen into an unsecured pit toilet at one school; a block of nine poorly constructed toilets at another, that cost R6 million.

“We send our children to school hoping they will end up with a matric certificate,” Bhanga said. “Instead they come back with a death certificate.”

“The money that is supposed to go to building services is not going where it’s supposed to,” Bhanga said.

He spoke of alleged corruption in Nelson Mandela Bay Municipality’s R21 million drain-cleaning project, for which more than 900 SMMEs were contracted. The DA claimed in a February media release that their appointments were irregular because they hadn’t been approved by Council.

During his address in Makhanda, he referred to the December move as a “Christmas tender” Bhanga spoke of subsequent intimidation and even assassinations linked to the project.

“There must be people in society who when things go wrong stand up and say no,” Bhanga said. “I was warned that if I expose this I would be next. “But when I saw families surrounded by raw sewage, I couldn’t keep quiet. If we fold our arms because we fear intimidation by criminals, the Eastern Cape, including Grahamstown, will be broken.”

He said it was the DA’s role as opposition to point out corruption.

“Corruption steals from the poor. When the DA is in government, there will be strong laws against corruption,” Bhanga said.

“There is money – but it must be used for the right things.”

In the Eastern Cape, R102 million had been spent over the past five years on catering. “This money should have been be used to build roads and infrastructure,” Bhanga said.

For the past 10 years, there had been no budgeting in local governments for the maintenance of infrastructure, which was collapsing all over the country as a result.

“In Komani the municipality is being auctioned off,” Bhanga said. “Queenstown could be most the beautiful town – but it has been destroyed. Businesses can’t function, jobs have been lost: you can’t rehabilitate it. There’s no money and they’re close to the point where they can’t pay employees. They’re on the verge of collapse.

Bhanga said it was unacceptable when you paid for a service from a municipality and did’t get the service.

“We give them three months,” he said. “If they fail we will mobilise the community and use our power as people to force change.”

He was quick to add that this did not mean withdrawing payment – “that will just collapse the municipalities. But we can’t go to war with a breadknife,” Bhanga said. “It cannot be that the ANC and public officials face no consequences.”

Many South Africans would lose their jobs as a result of Eskom’s failures, Bhanga said. People needed electricity to make their businesses work.

“We have a crisis in SA. We might think we can manage – but I don’t think they have a plan,” Bhanga said. “I know when Pravin is confident and looking at him, I realise this government has no plan. The only thing they said was, ‘We must communicate better’.”

“When the ANC took over, Eskom was a capable institution with capable people. They broke down Eskom.”

He said technical people were sidelined in decision making which was left to the Board and politicians. “Everything the ANC has touched has broken,” he claimed. “Every municipality that was functioning has broken down. Poverty and difficulty are coming directly into people’s homes.”

He spoke of gangsterism in Port Elizabeth’s Northern Areas and his shock at seeing bullet holes in a house he visited.

“I thought I knew crime,” said Bhanga, whose own childhood circumstances were difficult. “People in those areas have never tasted peace.

“The problem,” he said, “is members of a police service with stomachs like mine.”

Speaking of the Metro Police in Port Elizabeth during the DA’s two-year rule there, he said, “We didn’t employ people with stomachs like Nqaba’s. We trained people from the Eastern Cape who were young and passionate.

Bhanga said when one went to report a robbery, the police would say, “’Who do you suspect?’ – because they have no investigating capacity. We need to fix the police.”

Bhanga spoke of a parent’s shame at not being able to give their child the basics.

“There are 1 million people in the Eastern Cape unemployed – people who can’t put food on the table and bring dignity to their children. Take unemployed kids for one year of community service,” Bhanga said.

The DA’s campaign slogan, “Secure our borders” has come under criticism. Bhanga elaborated on what was behind it.

In Nelson Mandela Bay, nine new vehicles were bought for the Metro Police.

“They were bought on Tuesday – on Saturday they were all stolen,” Bhanga said.

They’d been found in Namibia. “They were simply driven across the border: our borders are open.”

At the Mozambique border, he said, there were usually more cars than people at the border.

“If we don’t secure our borders, the drugs and weapons behind crime and conflict can move freely into our country.” He said most vehicles hijacked in Gauteng ended up in Mozambique and Zimbabwe.

“Everyone must be registered in South Africa.”

Bhanga spoke about his visit with former NMB Mayor Athol Trollip to a house in Russell Road where young black and coloured children were being kept for prostitution and drugs.

“We made sure the building was demolished,” Bhanga said.

In another area, they had approached the owner of a run-down building. “Trollip said to him, ‘I am fixing my town: you are not fixing your building!’”

The owner had asked for help and received support. Today it stood as a smart and well maintained public facility.

“In three months, we demolished more than five buildings,” Bhanga said. “When a government does what it promises, you change communities.”

He said failure to vote would be to “renew the ANC’s contract to continue for the next five years to collapse municipalities”.

He said the DA had brought positive change in two years of governing NMB.

“To remove the apartheid government, we had to collapse its system – to make apartheid unworkable. There might come a situation where as citizens we must use our power to make change.

“I’m not saying withdraw rates and taxes,” Bhanga said. “Because if we don’t pay, we collapse services to the poorest of the poor.

“But you can’t go to war with a breadknife: we can use our power as a community – we can mobilise. It can’t be that there are no consequences for the ANC and public officials.

“South Africans go to the government and buy services – but they don’t get them. You can feel it here in Grahamstown that people have had enough.”

The DA’s slogan is ‘Build one SA for all’ and Bhanga said the DA was the only properly non-racial party. “I do this [job]because I don’t want my children to be a victim of this system,” he said.

“Every vote counts and going to vote for a smaller party is not an option,” Bhanga said.