Trouble in the treatment works 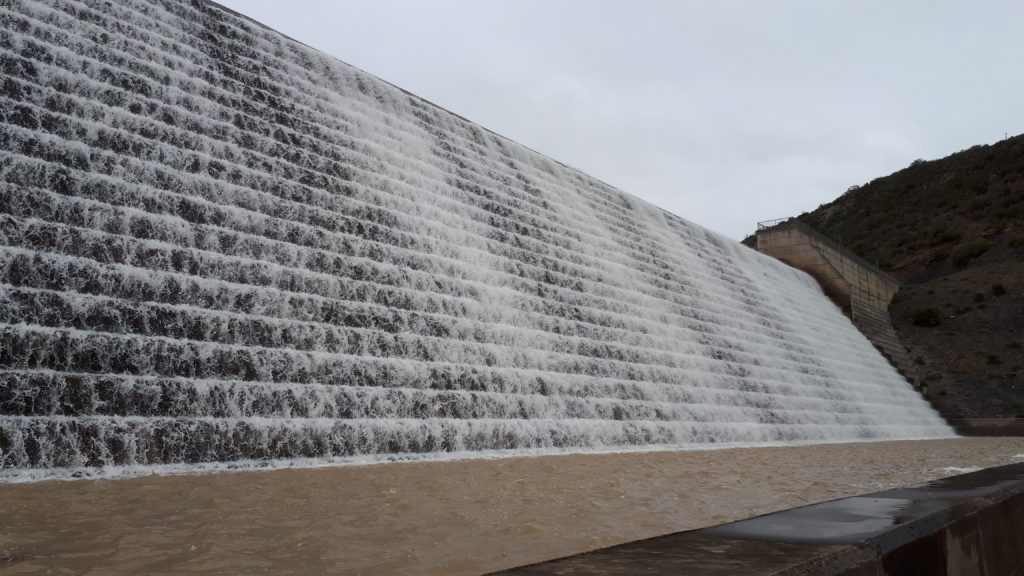 Water flows down the dam wall at Glen Melville dam, the supply for Jame Kleynhans Water Treatment WOrks to east Makhanda (Grahamstown) on 11 February. Makana Municipality said a release from the Fish River had made the water too turbid to pump. Photo: Sue Maclennan

Grocott’s Mail visited Makhanda’s (Grahamstown’s) James Kleynhans water treatment works after the town had been without water for days. Queues of residents lined with buckets up along streets, with trucks being deployed to manually distribute water to residents – particularly those in high-lying areas. At the plant serving east Grahamstown, the clarifier ponds were thick with sludge, with at most 5cm of clear water sitting on top. The sludge had to be pumped out before the treatment and supply of water to residents could be resumed.

Copy and paste the same and you have a description of Grocott’s Mail’s visit to the plant on Monday 11 February 2019, more than five years later.

While Grocott’s Mail was at James Kleynhans WTW on Monday 11 February 2019., a private plumbing company was suctioning out the thick brown sludge that filled two clarifier (settling) tanks occupying an area about as big as a quarter of a soccer field. Viscous mud, visible a few centimetres under the surface but which Grocott’s Mail was assured was 6 metres deep, filled both tanks.

Last weekend, Amatola Water arrived with a large diesel pump to assist with draining the sludge. Early last week the plant was restarted and water started slowly trickling into the local reservoirs. On Friday 15 February, residents in some areas reported that an intermittent water supply had returned. By Monday 18 February, many areas had experienced at least some supply, some of the time.

The Makana-led joint operations committee managing the municipality’s water crisis has since Saturday 9 February been co-ordinating deliveries of water to residents whose taps had been dry for a week or longer. The arrival of the Gift of the Givers relief organisation with six truckloads of bottled water from every corner of the country drew national attention to the crisis. Before February 2019, and fresher in residents’ memories than Christmas Eve in 2013, was May 2018, when the same situation exacerbated  a water safety crisis caused by inadequate chlorination.

Test results recorded in Council documents in April 2018, more than a month after the testing, show there had been e.coli in water distributed from that supply, as well as high levels of other potentially pathogenic bacteria. An advisory to boil water follows and outraged protesters arrive at the City Hall with bottles of dirty water and a bucket of raw sewage, challenging officials to drink the mixture.

In a media release issued on Wednesday 13 February, Makana Municipality issued the following statement about a week-long water outage caused by operational problems at the James Kleynhans Water Treatment Works which supplies water to Makhanda East:

On 1 February 2019, the Department of Water and Sanitation, (DWS) released water from the Fish River scheme to the Glen Melville dam whose water level was low and the incoming supply from the Fish River agitated the sediment resulting in a high turbidity level measured at 1000 NTU.

No water could be treated at the James Kleynhans Water Treatment Works as the plant is not designed to handle such high turbidity. The incoming turbidity is normally at 80 NTU which is already too high for the plant.

On Wednesday 13 February water started returning to taps in some areas. Water deliveries co-ordinated by the municipality continued through Friday. They were supplemented by bottled water taken to residents by charity Gift of the Givers last week.